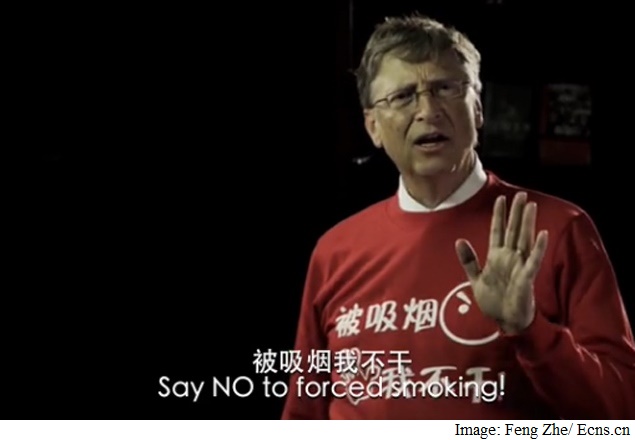 Microsoft founder Bill Gates has joined an anti-smoking campaign in China, home to the world's largest number of smokers, featuring in a music video as part of a social media drive against passive smoking.

Gates plays a cameo role in the Chinese anti-smoking music video, which is part of a social media campaign launched by the Bill and Melinda Gates Foundation of which he is co-chairman.

China has more than 300 million smokers and another 740 million people are exposed to second-hand smoke each year, according to the National Health and Family Planning Commission.

Feng Zhe, a gold medalist on the parallel bars in the 2012 Olympic Games, released his song 'Say No to Forced Smoking', state-run China Daily reported.

Gates appears in the video wearing a T-shirt bearing the words of the song title.

Gates' campaign received more than 40 million hits on microblog and tens of thousands of people voiced their support for the initiative in its first two weeks, Yang-Jianyue, deputy director of the Gates Foundation in China, said.

The song is the latest initiative in a social media campaign that began in October.

The foundation has joined with social media and philanthropic partners in calling on netizens to submit witty sayings against second-hand smoke.

"That's why tobacco control needs social media where you can have other people talking for you and becoming part of the solution," Angela Pratt of the WHO Tobacco Free Initiative in China said.

"Smoking is not cool, while smoking control can be cool and dynamic," Pratt said.

The UN health body in China will broadcast anti-smoking videos submitted by contestants from both China and the United States through online outlets including its own Sina Weibo account next week, she said.

Xi said China would deepen its cooperation with the foundation, especially in HIV/AIDS prevention and control, smoking control and tuberculosis intervention.