The image offers an uninterrupted view of the nuclear star clusters at the centre of the Phantom Galaxy. 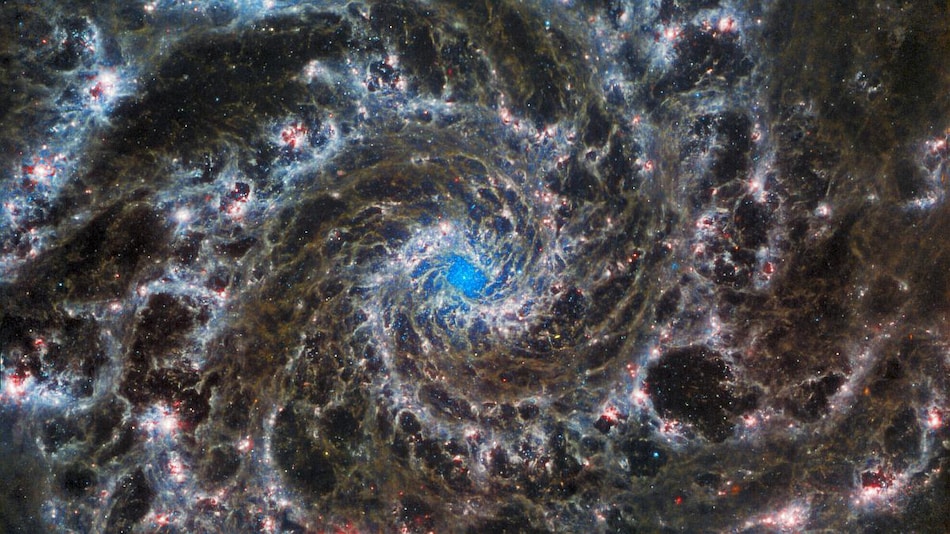 As the world's most powerful and largest space telescope, NASA's James Webb Space Telescope has no equal when it comes to observing celestial bodies. Researchers have now used the telescope to peer into the spectacular Phantom Galaxy, sharing a stunning image of the heart of the galaxy. Located around 32 million light-years away, the Phantom Galaxy, also called M74, is of particular interest for astronomers to study the origin and structure of galactic spirals. It is a particular class of galaxies called a grand design spiral, with spiral arms that are prominently visible and well-defined, instead of being patchy and ragged like those in other spiral galaxies.

The new images of M74 feature shared by the European Space Agency (ESA) reveal delicate filaments of gas and dust in the spiral arms that wind outwards from the centre of the picture. The image also doesn't show gas in the nuclear region which offers an uninterrupted view of the nuclear star clusters at the centre of the galaxy. These observations could be possible due to the exceptionally sharp vision of Webb.

The JWST telescope's Mid-Infrared Instrument (MIRI) was used to peer into the galaxy and gain a better understanding of the phases of star formation in the universe. This observation was conducted as part of a larger effort by the international PHANGS collaboration to chart 19 nearby star-forming galaxies. The Hubble Space Telescope and other ground-based observatories had already observed these galaxies but data from Webb has provided scientists with a more comprehensive view.

NASA's Webb telescope also provided a clear view at longer wavelengths that will allow astronomers to zero in on the star-forming regions of the galaxies. In addition, it will allow for accurate measurement of the masses and ages of star clusters while also giving insights into the nature of small grains of dust drifting in space.

The Hubble Telescope's observations, meanwhile, highlighted the HII regions or the bright areas of star formation. The sharp vision of the Hubble Telescope, which works in the ultraviolet and visible wavelengths, complimented the high sensitivity of the Webb at infrared wavelengths.

Researchers believe that combing data from such telescopes operating at different wavelengths can provide greater insight into astronomical objects than using a single powerful observatory.