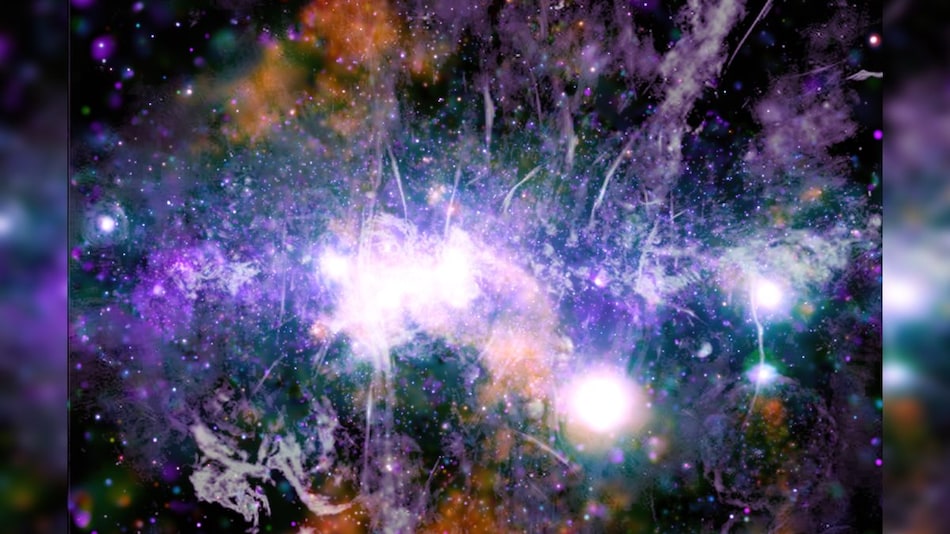 NASA shared a stunning panoramic view of the Milky Way's galactic centre on Instagram. Explaining the photo, the space agency said threads of superheated gas and magnetic fields weave a tapestry of energy at the centre of the Milky Way galaxy. NASA captioned the post, “The fabric of our galaxy.” This image of the cosmic masterpiece was created after using data received from NASA's Chandra X-Ray Observatory and the MeerKAT radio telescope in South Africa. In the post, the agency said that X-rays from Chandra are orange, green, blue, and purple, showing different energies, and the radio data from MeerKAT are shown in lilac and grey.

It further wrote that “unravelling these threads taught us what the weather was like in that region of space.” The weather, according to NASA, is determined by “volatile phenomena such as supernova explosions and outbursts of matter near the bright centre of the cluster,” where Sagittarius A — a supermassive black hole — is located. It said the combination of X-ray and radio views allowed us to “see magnetic fields that have aligned in different directions, collided, and became twisted around each other in a process called magnetic reconnection.”

On its website, NASA said that the new panorama of the galactic centre builds on previous surveys from Chandra and other telescopes. It adds that the latest version expands Chandra's high-energy view farther above and below the plane of the Galaxy — that is, the disk where most of the Galaxy's stars reside — than previous imaging campaigns.

NASA said one thread, in particular, was intriguing, for it had X-ray and radio emission intertwined. "It points perpendicular to the plane of the galaxy and is about 20 light-years long but only one-hundredth that size in width," the space agency said.

On Instagram, users reacted to the panoramic view of the galaxy, calling it “unreal” and “breathtaking” among other things. The post has been liked by over 918,110 users.