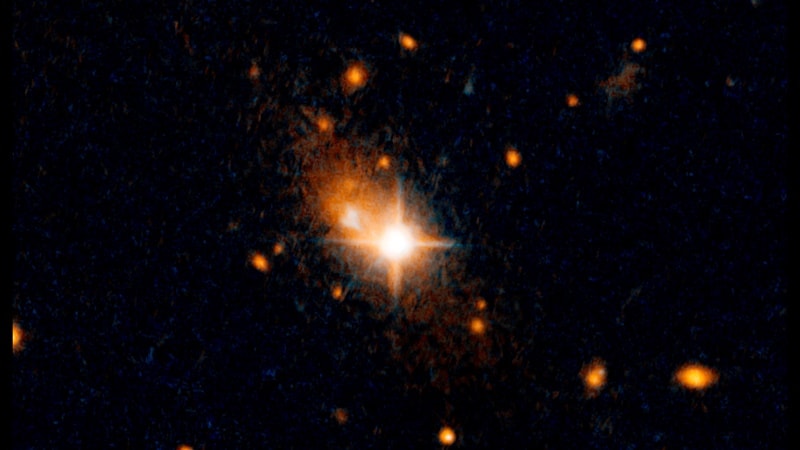 NASA's Hubble space telescope has detected a supermassive black hole that has been kicked out of the centre of a distant galaxy by what could be the awesome power of gravitational waves.

Weighing more than one billion suns, the rogue black hole is the most massive black hole ever detected to have been kicked out of its central home.

Researchers estimate that it took the equivalent energy of 100 million supernovas exploding simultaneously to jettison the black hole.

The most plausible explanation for this propulsive energy is that the monster object was given a kick by gravitational waves unleashed by the merger of two hefty black holes at the centre of the host galaxy, according to the scientists.

"When I first saw this, I thought we were seeing something very peculiar," said team leader Marco Chiaberge of the Space Telescope Science Institute (STScI) and Johns Hopkins University, in Baltimore, Maryland, US.

"When we combined observations from Hubble, the Chandra X-ray Observatory, and the Sloan Digital Sky Survey, it all pointed towards the same scenario," Chiaberge added in a statement released by NASA on Thursday.

Hubble images taken in visible and near-infrared light provided the first clue that the galaxy was unusual. The images revealed a bright quasar, the energetic signature of a black hole, residing far from the galactic core.

"Black holes reside in the centre of galaxies, so it's unusual to see a quasar not in the centre," Chiaberge added.

The team calculated the black hole's distance from the core by comparing the distribution of starlight in the host galaxy with that of a normal elliptical galaxy from a computer model.

The black hole had travelled more than 35,000 light-years from the centre, which is more than the distance between the sun and the centre of the Milky Way, according to the study.

"To our surprise, we discovered that the gas around the black hole was flying away from the galaxy's centre at 4.7 million miles an hour," said team member Justin Ely of Space Telescope Science Institute.

This measurement is also a gauge of the black hole's velocity, because the gas is gravitationally locked to the monster object.

The astronomers calculated that the black hole is moving so fast it would travel from Earth to the moon in three minutes. That's fast enough for the black hole to escape the galaxy in 20 million years and roam through the universe forever.

First predicted by Albert Einstein, gravitational waves are ripples in space that are created when two massive objects collide.

The ripples are similar to the concentric circles produced when a hefty rock is thrown into a pond.

Last year, the Laser Interferometer Gravitational-Wave Observatory (LIGO) in the US helped astronomers prove that gravitational waves exist by detecting them emanating from the union of two stellar-mass black holes, which are several times more massive than the Sun.