The pulsar was first discovered in 2017 and was dubbed the “black widow” as it has the tendency to eat its companion with female black widow spiders. 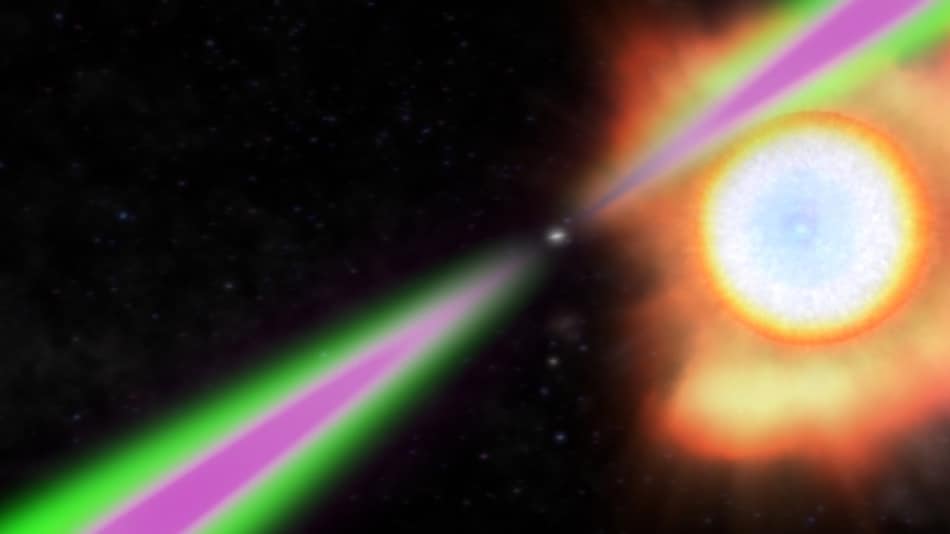 In an intriguing celestial event, a collapsed dense neutron star was caught shredding and devouring its stellar companion to become one of the heaviest neutron stars ever spotted. The star has a mass 2.35 times that of the Sun and spins at a speed of 707 rounds per second. The finding may now give astronomers an insight into the weird quantum state of matter inside such dense objects. They believe that with such massive size if the star grows further, it will completely collapse and vanish as a black hole.

The observation was done by employing the 10-meter long Keck I telescope, which has the extreme sensitivity required for such tasks. The team used the Keck Observatory Low-Resolution Imaging Spectrometer (LRIS) and recorded a spectrum of visible light from the glowing companion star that has now shrunk to the size of a large gaseous planet.

The observations were reported in a study published in The Astrophysical Journal Letters.

“We know roughly how matter behaves at nuclear densities, like in the nucleus of a uranium atom. A neutron star is like one giant nucleus, but when you have one-and-a-half solar masses of this stuff, which is about 500,000 Earth masses of nuclei all clinging together, it's not at all clear how they will behave,” said Alex Filippenko, distinguished professor of astronomy at the University of California, Berkeley.

According to Roger W. Romani, a professor of astrophysics at Stanford University, the cores of the neutron stars are the densest matter known in the universe after the black hole. The observed neutron star, which is a pulsar designated PSR J0952-0607, is the densest object ever spotted, Romani explained.

The pulsar was first discovered in 2017 and was dubbed the “black widow” pulsar as it shares the tendency to eat its companion with female black widow spiders. Romani and Filippenko have been analysing the black widow system for the last 10 years and now hope to predict the extent to which such neutron stars can swell.

“By combining this measurement with those of several other black widows, we show that neutron stars must reach at least this mass, 2.35 plus or minus 0.17 solar masses. In turn, this provides some of the strongest constraints on the property of matter at several times the density seen in atomic nuclei. Indeed, many otherwise popular models of dense-matter physics are excluded by this result,” said Romani.

For now, the researchers have put the growth limit of the neutron stars at 2.3 solar masses, but insist that they will keep looking for black widows and similar neutron stars that are on the verge of becoming a black hole.