The researchers used laser beams to trap and illuminate a tiny particle to draw an image. 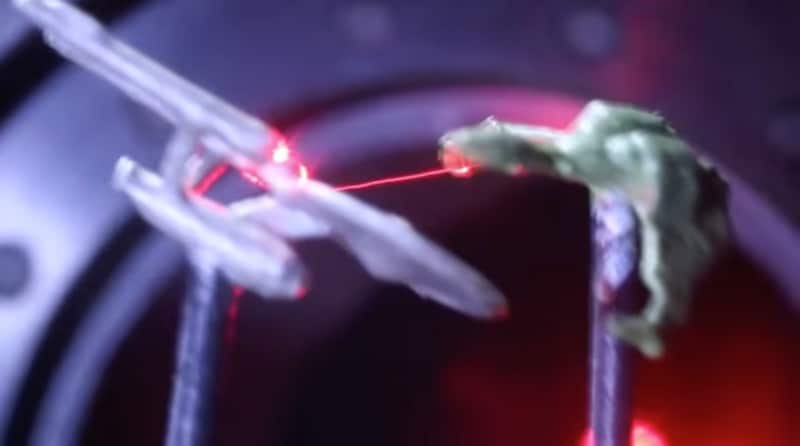 BYU Researchers said the laser blast in the video was a real laser light, not CGI

Inspired by iconic laser displays seen in science-fiction movies, such as Star Trek and Star Wars, US researchers have figured out how to create real-life images that move in the air. And the results are truly out of this world. They used lasers and a tiny particle free-floating in the air to create digital images which can be viewed without the need of a special headset or smartphone. Even if we look at these three-dimensional images from any angle, we can see them existing in that space, meaning they are physical.

Led by Brigham Young University (BYU) professor of electrical engineering, Dan Smalley, the researchers at the Utah-based university used laser beams to trap and illuminate a tiny particle in the air. They then moved the beam, dragging the particle with it, to draw an image in the air.

During an approximately four-minute YouTube video, Smalley shows an augmented reality battle between a tiny version of the USS Enterprise, a US Navy aircraft carrier, and a Klingon Warbird from “Star Trek”, using the new technology.

Smalley said most 3D displays require a person to look at a screen, but the technology he and his team members have developed allows them to create images floating in space. “What you're seeing in the scenes we create is real; there is nothing computer-generated about them,” a BYU blog quoted Smalley as saying.

Smalley and his team garnered national and international attention three years ago for figuring out how to draw screenless, free-floating objects in space. That technology was named “optical trap displays”. The researchers then spent three more years improving their OTD technology to include real animation produced in thin air.

The research, funded by a National Science Foundation CAREER grant, was first published in the Nature Scientific Report journal. And Smalley's comprehensive body of work can be accessed on the website of the BYU Electro Holography Group.

The development, the researchers said, can pave the way for people to have an immersive experience and interact with virtual objects that co-exist in their immediate space.