The Echo Show 5 is smaller, and more importantly, much more affordable than the full-size Amazon Echo Show. 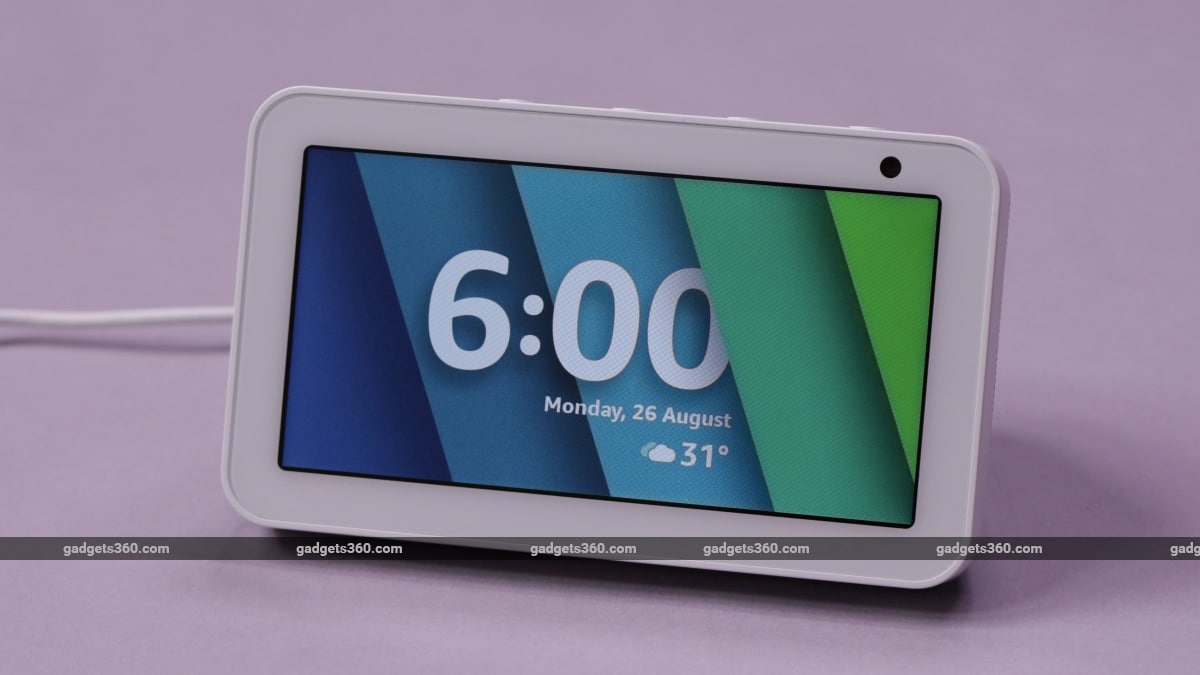 The Amazon Echo series of smart speakers are typically focused on Alexa, the company's AI-based voice assistant. Using the speaker involves a lot of voice commands, but one recent product in the range, the Amazon Echo Show, also added a visual element. While we quite liked the Echo Show, its Rs. 22,999 price tag was a bit too high to consider it anything more than a niche product for early adopters.

It seems that Amazon is listening, and has now launched the Echo Show 5, a smaller and much more affordable smart display and speaker. It's like the larger Echo Show in many ways, but has a much more attractive Rs. 8,999 price tag, and Amazon hopes this will make it easier for buyers to adopt its screen-and-voice model of interacting with Alexa. Let's dive right in and take a closer look at the Amazon Echo Show 5.

The Amazon Echo Show 5 is, at its core, the same as the larger Echo Show in its positioning; it can be considered a smart display but is more aptly described as a smart speaker with a screen for additional cues and information. It would even fit the description of a very technologically advanced table-top clock, if that's what you would want to use it for.

The most significant difference between the Echo Show 5 and its larger and more expensive counterpart is size — this new model is much smaller, with a 5.5-inch touchscreen and a single 1.65-inch speaker driver for sound. The screen has an 18:9 aspect ratio and a resolution of 960x480 pixels, which is a lot smaller and more compact than the tablet-like 10.1-inch, 16:10 screen on the Amazon Echo Show.

The smaller size makes the Echo Show 5 more convenient for table-top use. This design is good for basic functions, including serving as a clock, displaying the weather, and providing visual cues such as track name and album art when listening to music. While we did like the convenience of this size, the screen was a bit too small for viewing across a regular-sized room.

At 5.5 inches, the Echo Show 5's screen is smaller than those on a lot of smartphones today, and we could barely read any text on it unless we went right up to the device. The touchscreen can be used to control some basic settings on the Amazon Echo Show 5, such as brightness and the do not disturb status.

In terms of design, the Echo Show 5 has the same general look and feel as its bigger sibling, with the screen tilted slightly upwards and the back of the device wrapped in fabric. The speaker grille is at the bottom, below the screen, and fires directly at the surface the Echo Show 5 is placed on. There is rubber for grip at the bottom of the device, and three buttons at the top — one to activate or disable the microphones, and two to control the volume. There is also a slider switch that controls a physical cover for the 1-megapixel camera.

The camera switch comes as a response to various privacy concerns, including those in recent reports about AI-based assistants, and a physical cover certainly negates any possibility of the Echo Show 5 seeing and recording something it shouldn't. However, disabling the microphones is still a software-based function, and you're just going to have to trust Amazon when it says they are off.

There are two microphones at the top of the Echo Show 5, placed between the three buttons. The back of the device has a round power socket for the included adapter, a 3.5mm audio-out socket to send audio to a speaker system or headphones, and a Micro-USB port, which can be used for wired Internet connectivity (using an appropriate adapter) and for service-related functions.

The sales package of the Amazon Echo Show 5 includes only a power adapter with a fixed 1.5m cable, along with the device itself. It relies on Wi-Fi connectivity for its core Alexa and content streaming functions, but you can also connect to devices such as smartphones, tablets, and computers using Bluetooth to play your own music. The device is powered by the MediaTek MT8163 processor.

While the larger Amazon Echo Show has additional functionality as a smart home hub using the Zigbee home automation standard, the Echo Show 5 doesn't support this feature. However, you can still use it to control IoT devices that have their own hubs or don't require any such thing. We used the Echo Show 5 to control a Mi Air Purifier through Mi Home integration with Alexa, and this worked as expected.

Like other Echo speakers, the Amazon Echo Show 5 relies on Alexa for its core functionality. We've explored these features in detail in previous reviews of Echo products including the Amazon Echo Plus and Amazon Echo Show, While Amazon seems to be continuously improving Alexa's ability to understand voice commands and give more relevant responses, it remains the same Alexa that we're already familiar with.

As with the Echo Show, the Amazon Echo Show 5 lets you make video calls, including the drop-in feature that you can use to quickly make a call from any smartphone with the Alexa app installed to the Echo Show 5. It's also possible to set up Alexa skills that make use of the screen. You can play videos using the built-in browser, and watch TV shows and movies on Amazon Prime Video.

Although Alexa can play YouTube and other online videos through voice commands, we found that it usually didn't play the right video this way, and only really got voice searches right when we asked for movie trailers. We found it easier to go to YouTube through the browser, manually search by typing, and then play the videos we wanted to watch.

While the larger Echo Show primarily shows images and news flashes, the Echo Show 5 devotes a lot of screen time to functioning as a clock. You can choose from various clock faces for the Echo Show 5 and the device will stick to that clock face when displaying the time, but you can't choose what exactly shows on screen when the Echo Show 5 is in standby mode. The device chooses what to display on screen itself, cycling between the clock and trending topics, such as news and Alexa tips.

Some relatively new changes we've seen that utilise the screen include displaying lyrics for some tracks streamed on Amazon Music, and there are various new skills that seem to be focused on making the Echo Show 5 useful and safe for children. You can use the Alexa app to select and configure these skills, as well as control other features on the Amazon Echo Show 5.

The Amazon Echo Show 5 isn't quite as well equipped in the sound department as most other Echo products. It has a single 1.65-inch speaker, which is around the same size as the one on the Rs. 3,499 Amazon Echo Dot.

That said, this device is quite loud, thanks to its bottom-firing design which bounces sound off the surface the speaker is on. That's not to say that the Echo Show 5 is as loud as even the Rs. 7,999 Google Home, but it is loud enough to be heard comfortably anywhere in a large room. For the best sound imaging, we needed to be seated in front of the Echo Show 5.

Coming to the actual sound quality, the Echo Show 5 was decent enough for casual listening. Music was slightly tinny, with somewhat sharp highs that caused some sibilance. The low-end is decent enough in terms of quality, but the bass came across as boomy rather than calculated. Considering that there definitely is space at the back of this device, we feel that Amazon should have built a passive radiator into the Echo Show 5 for better low-end responses.

Listening to Pjanoo by Eric Prydz streamed over Amazon Music, we found the soundstage to be fairly narrow, but the sonic signature was satisfactorily clean. Music played over Bluetooth sounded similar to streamed music, and on the whole everything we listened to was a bit dull at lower volumes. The mid range was also decent, despite the consumer-friendly V-shaped sound signature.

The Amazon Echo Show 5 is, in our opinion, a much-needed product for the Echo range. It combines the benefits of Alexa with both sound and visual feedback, just like the Echo Show, but at a much more affordable price. Although sound quality is average at best, the overall feature set makes this an attractive product.

If you're looking to buy a smart speaker and get on the voice assistant bandwagon, the Amazon Echo Show 5 is perhaps the most feature-filled and capable device today that costs less than Rs. 10,000. There are better-sounding options at around the same price that you can buy instead if sound quality is your main concern, such as the Google Home or Amazon Echo. However, the benefits of the screen, as well as the Echo Show 5's utility when not in active use, make it a better option at this price, in our opinion. This device opens up the possibility of having a smart display to many more buyers, thanks to its reasonable pricing.