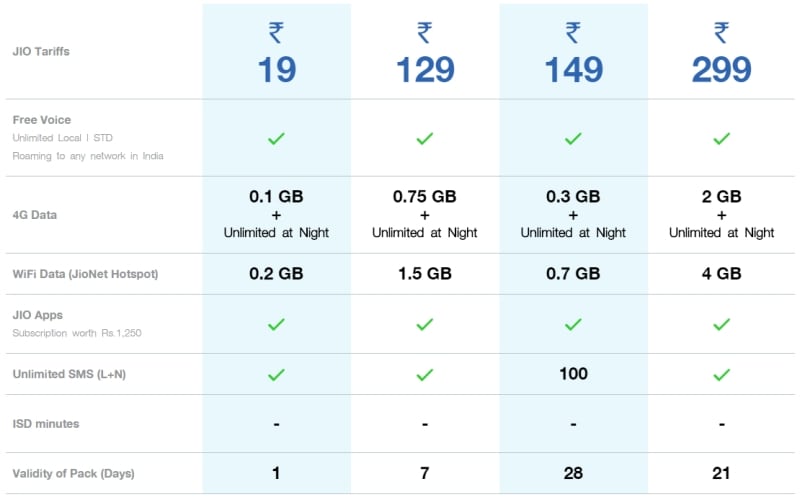 Although Reliance Jio announced plans last week, the company seems to be still working out what the final rates and benefits for customers will be once customers start paying for services from January 1. As of now, there are ten different plans under which you can subscribe to Jio - voice calls are free in all plans, and you pay only for the data packs. The entry level plan, Rs. 149, seemed like a bad deal at the launch since it only came with 300MB of data bundled, and no access to Reliance’s JioNet Wi-Fi network, or to the unlimited 4G usage at night (between 2AM and 5AM) that all the other plans get to use.

Now, the company has updated its plans on the Jio website, and it's offering free night usage even for the Rs. 149 plan, and 700MB of bundled usage at Jio's public Wi-Fi hotspots. This brings the entry level plan more in line with Jio's other offerings, though the amount of data being offered is still very low. Even if you count the Wi-Fi access, that works out to Rs. 150 per GB, far more than you pay on any of the other Jio plans.

(Also see: How and Where to Get Reliance Jio SIM Card)

For people who mostly use only voice calling though, and rarely if at all use data, the plan could actually work out to be a way for saving money compared to what they typically have to pay to other carriers. As with all Reliance Jio plans, students will get an additional 25 percent of data usage on both Wi-Fi and 4G.

(Also see: List of VoLTE Phones That Will Work on the Reliance Jio Network)

It's worth noting that Reliance Jio is offering all users unlimited free usage until December 31, 2016, as part of it's one-time welcome offer, though this use is capped at 4GB of 4G data every day. This means that regardless of what plan you're looking at, for the next four months everyone is on the same free, unlimited slab, so as of now, Jio's different plans can still be treated as moot. It's only going to be final on January 1 2017, once people have to choose a plan and start paying, though the plans might still change between now and then!

(Also see: Reliance Jio Looks Unstoppable. This One Thing Could Still Be a Problem)