Samsung to Host Its MWC 2021 Virtual Event Today: How to Watch Live, What to Expect

Samsung has teased to unveil “its vision for the future of smartwatches” at MWC 2021. 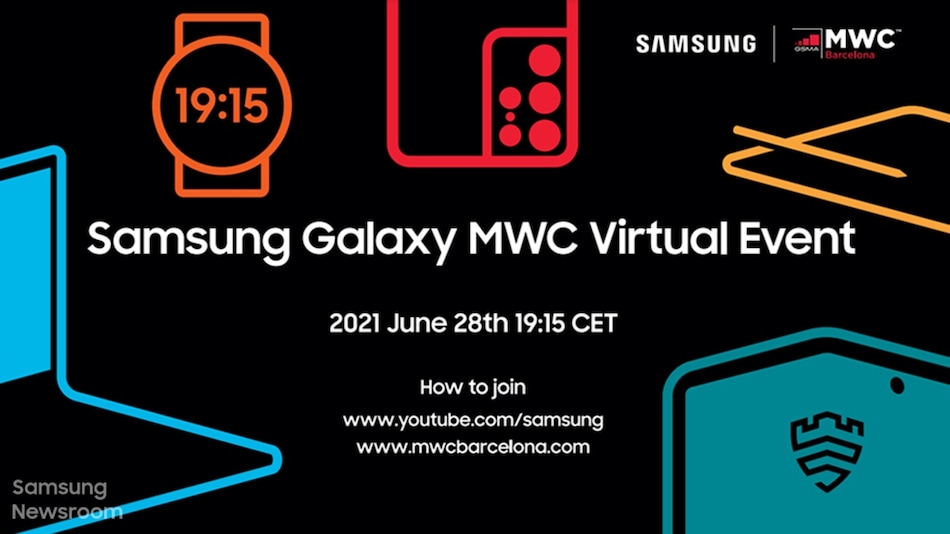 Samsung's virtual event at Mobile World Congress (MWC) 2021 is set for today. The South Korean tech giant has teased the launch of new devices at the event. The company is speculated to launch a new smartwatch, among other things. While Samsung usually holds standalone Galaxy Unpacked events for its flagship models, like the foldable phones and the Galaxy S series, it could offer a glimpse at the upcoming models during the virtual event later today. MWC 2021 will run from Monday, June 28, to Thursday, July 1.

The virtual event will begin at 7:15pm CET (10:45pm IST) today. It will be livestreamed through Samsung's official YouTube channel and the Samsung Newsroom site.

On the Newsroom site, Samsung confirmed that it will be unveiling its vision for the future of smartwatches at the event with new opportunities for both developers and users designed to deliver a new era of smartwatch experiences.

Samsung also hints at improvements to OneUI software, especially on how it is looking to improve security in its IoT products. “Furthermore, understanding how device security has never been more important than it is nowadays, the company will be sharing its latest security enhancements and innovations designed to give users protection and peace of mind in an open and connected world,” the company added.

At I/O 2021, Google had announced that Samsung will use its Wear OS software for its upcoming Galaxy smartwatches instead of its own Tizen platform, and this change should be detailed at the event today. It could allow for better battery life and performance as well as support for newer apps and watch faces. If we look at previous reports, Samsung is rumoured to be working on the Galaxy Watch 4. The smartwatch is tipped to have a circular build and have a bioelectrical impedance analysis (BIA) sensor for monitoring body composition. It is expected to come in four distinct colour options — Black, Dark Green, Rose Gold, and Silver. The Galaxy Watch 4 may also come in 40mm and 44mm sizes as well as include 5ATM water resistance, MIL-STD 810G durability, and Gorilla Glass DX+ protection. It is also likely to have GPS support.

While a smartwatch is largely anticipated, the poster teased for the MWC event today also suggests that Samsung may give a glimpse at the new foldable devices and maybe even a tablet. Samsung is reportedly working on the Samsung Galaxy Z Fold 3 and Samsung Galaxy Z Flip 3 foldable phones, as well as the Samsung Galaxy Tab S8 family. While all of these are expected to debut in August, including the Galaxy Watch 4, some details about the devices is probable.