Samsung, Pebble Account for 96 Percent of Smartwatch Sales in the US: NPD 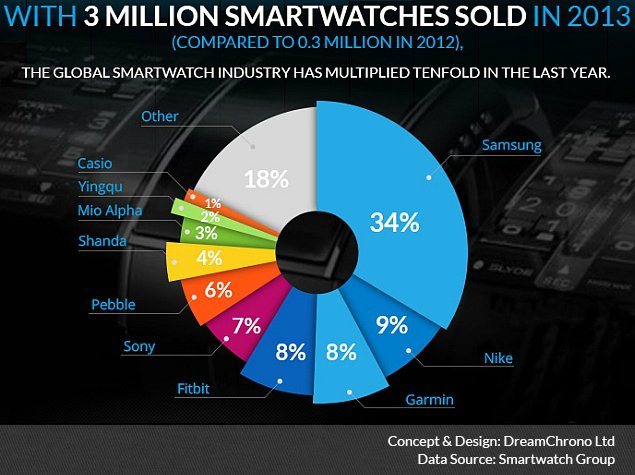 Samsung and Pebble are the two manufacturers that dominated US smartwatch market since October, according to a survey, with the Samsung Gear family accounting for 78 percent of the total $96 million revenue, and Pebble 18 percent.

According to NPD's Weekly Tracking Service, "almost half a million smartwatches have been sold in the U.S. since October 2013 and category incumbents, Samsung and Pebble, dominate the market."

The NPD Group is a market research company that provides market information and advisory services. The recent survey done by the company includes sales data from October 6, 2013 to May 25, 2014.

From the survey report published on Tuesday, NPD Group did not detail smartwatch sales figures of other companies like Sony and Qualcomm.

One third of all smartwatches sold in the surveyed period were sold during the 2013 holiday season, according to NPD Group.

"The smartwatch market is poised to continue to grow in 2014" said Ben Arnold, executive director of industry analysis at NPD. "With nearly $100 million in US sales in less than a year, the category is off to a promising start with just two major brands."

The report further added that NPD's Wearable Technology Study observed that roughly 20 percent of consumers say they are interested in purchasing a smartwatch but the pricing is a barrier. Prices of the smartwatches in US have fluctuated in a range from $160 to $257, now the average price of a smartwatch is $189.

Arnold added, "We've seen smartwatches become more affordable as manufacturers eye the opportunity to add them to smartphone purchases almost as an accessory. Like any new product category, the overall ASP (average selling price) on these devices will decline as the market becomes more diverse with budget, mid-level, and premium product offerings."
Comments