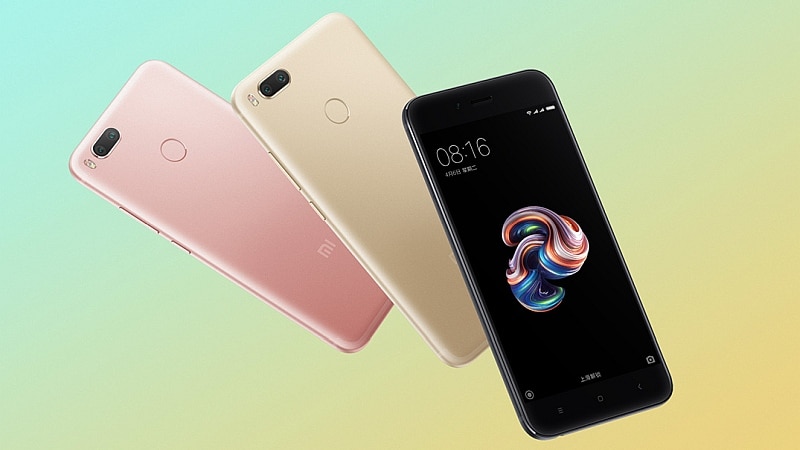 Xiaomi launched three new things on Wednesday in China: the Android 7.0 Nougat-based MIUI 9 software that will soon power many of its phones, the Mi 5X smartphone, and a smart speaker in Mi AI Speaker. In fact, the MIUI 9 custom skin has made its debut with the Mi 5X. The company has baked in its own version of Google features with MIUI 9, including image search, and a smart assistant. It also has a smart app launcher that suggests apps depending on screen text and context, but Xiaomi has noted that some features will only be available in China. MIUI 9 will roll out a China developer beta on August 11 for Mi 6, and Redmi Note 4X, with other phones said to get it later.

That leaves the Mi AI Speaker, which is Xiaomi's take on the voice-controlled digital assistants that began with the Amazon Echo, and have led to the Google Home followed by Apple HomePod later this year. The Mi AI Speaker looks closest to the Echo with its curved tall cuboidal shape; it has a six-microphone array and advanced echo cancellation to catch your voice. Being a Xiaomi product, it costs a fraction of its competition at CNY 299 (roughly Rs. 2,800).

Moto Z2 Force launched with dual rear cameras, QHD display at $799
Lenovo has launched a new Moto flagship as part of its extended Android line-up: the Moto Z2 Force. It's a direct sequel to last year's similarly-titled device less than a year after its release, and it continues the shatterproof strategy by using a ShatterShield display. The Z2 Force has a dual 12-megapixel rear camera setup and support for Moto Mod accessories, in addition to specs that match the best phones: a QHD 5.5-inch display, Snapdragon 835, up to 6GB RAM, and Google Daydream support.

Nokia 3310 with 3G support spotted online
When the Nokia 3310 (2017) launched earlier this year, many bemoaned that the phone only has supports 2G Internet speeds. Speaking to Gadgets 360 around the time of the phone's India launch, HMD Global's Juho Sarvikas did not rule out a variant with 3G/4G support in the future, and now it seems such a device will indeed become a reality. A Nokia 3310 variant with support for 3G networks has been spotted on FCC, the US body that grants certification to mobile devices. This device goes by the codename TA-1036 (the current model is TA-1030), and has dimensions similar to that of the one that is available in the market at present.

WhatsApp video to voice call switch leaked
WhatsApp is reportedly testing a new feature on Android that will let users switch from voice calls to video calls, and vice versa, without disconnecting. Spotted in Android beta version 2.17.263, the WhatsApp VoIP UI features a new video call button at the bottom of the screen when on a voice call. If a user wants to switch to video, then just hitting the video button to activate the camera and speak on video call will be the new way moving forward. The recipient has the option to decline the switch. The company is also said to be testing a new, standalone app just for business owners

In 2020, Adobe Flash will be no longer supported
Adobe has decided to retire Flash by 2020, the company announced late on Tuesday. More and more websites have been moving away from Flash to modern standards such as HTML5, though its decline began with Apple's decision to not provide support on the iPhone. Apple, Google, Facebook, Mozilla, and Microsoft – all partners with Adobe on Flash – will help developers to migrate their creations over the next three years.

Kaspersky Free now available worldwide
Kaspersky has introduced a free version of its popular antivirus software, to help improve machine learning across its products. Machine learning requires big data to properly train its algorithms, and providing a free antivirus should help the Russian company extend its user base. The free version isn't intended to replace the paid version, Kaspersky's founder said in a blog post, as it will offer only the "bare essentials".

Google adds SOS Alerts, Trusted Contacts comes to iOS
Google has unveiled a new SOS Alerts feature for its biggest products – Search, News, and Maps – which is meant to help inform people in times of crisis. Depending on your search query or proximity to the affected area, Google will surface necessary and important info such as top stories, official updates, websites and emergency phone numbers. In some cases, you might also receive a notification to alert you of a natural or man-made disaster.

Meanwhile, its Trusted Contacts app – which lets users share location with a predetermined select bunch of people – is now available on iOS, alongside improvements to the Android app. It now has wider language support, integration with Google Maps, and an option to specify a waiting period.

Flipkart's $950-million offer accepted by Snapdeal board
Snapdeal is said to have accepted Flipkart's renewed acquisition offer of up to $950 million (roughly Rs. 6,113 crores), according to multiple sources. The company's board approved the bid last week, and a deal is now pending with the shareholders. SoftBank, Snapdeal's biggest investor, is keen on seeing the deal through as it gives it an equity stake in one of India's two biggest ecommerce giants.

Facebook Live 360 now has support for VR and 4K
Facebook has updated its Live 360 offering with two new features: support for VR and 4K. Samsung Gear VR users now can enjoy 360-degree live videos in 4K with their headsets, though Oculus Rift doesn't yet have support. A tad weird considering Facebook owns Oculus. The social networking giant also announced a Live 360 Ready program as well, which is meant to help creators quickly find out if their camera hardware is up to the task. For now, the list includes Insta360 Nano, Giroptic iO, Insta360 Air, Insta360 Pro, Nokia Ozo Orah 4i, ION360 U, Z CAM S1, and 360fly 4K Pro.

Zuckerberg shares his optimism on AI in face of Musk's caution
Less than a day after Tesla and SpaceX founder Elon Musk criticised Facebook CEO Mark Zuckerberg's understanding of artificial intelligence, the latter reflected on his optimism in a Facebook post that congratulated his colleagues on winning an AI research award.

"One reason I'm so optimistic about AI is that improvements in basic research improve systems across so many different fields -- from diagnosing diseases to keep us healthy, to improving self-driving cars to keep us safe, and from showing you better content in News Feed to delivering you more relevant search results," Zuckerberg said. "Every time we improve our AI methods, all of these systems get better. I'm excited about all the progress here and it's potential to make the world better."

It's entirely possible that the timing, as well as the mention of self-driving cars – Tesla is a big proponent of the technology – is merely a coincidence, though we'll leave that up to you.

Apple ordered to pay $506 million after appeal fails in patent lawsuit
Apple has been ordered to pay $506 million (roughly Rs. 3,261 crores) in a patent infringement case by a US judge, which more than doubles the charge that was levied earlier on the firm. The case dates back to 2014 when the Wisconsin Alumni Research Foundation – the licensing arm of the University of Wisconsin-Madison – sued Apple for processors found in some iPhone versions. A jury handed a $234 million (roughly Rs. 1,507 crores) verdict in 2015, but Apple appealed. Another $272 million (roughly Rs. 1,753 crores) was added in Tuesday's verdict, with the judge saying WARF was owed additional damages plus interest because Apple continued to infringe the patent.

OnePlus explains what caused the emergency call bug on OnePlus 5
After fixing the emergency call bug on OnePlus 5, the company has now explained what caused the issue in the first place. According to the Chinese phone maker, the issue was related to "memory usage" for users on VoLTE network, where the call triggered an OTDOA protocol sending the location of the user to the emergency operators, and activated a reboot. The bug prevented OnePlus 5 owners from dialling 911 or 999, and OnePlus quickly resolved it by working with Qualcomm.