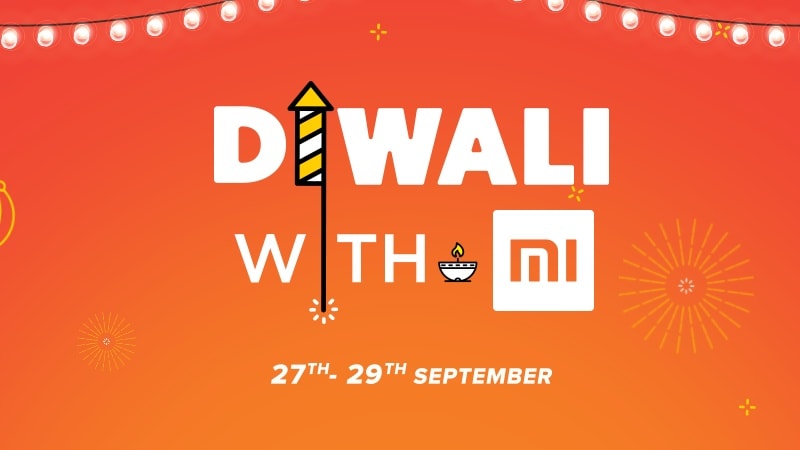 The big sales from major e-commerce players have come to an end, but Xiaomi's sale has just begun. After selling a huge amount of products in the recent sales held by Flipkart and Amazon, the company is now hosting its 'Diwali with Mi' sale on the Mi Store app and Mi.com website, from September 27 to 29. As you'd expect, Xiaomi is offering discounts and offers on most of its popular smartphone models like the Xiaomi Mi A1, Redmi Note 4, etc. The company is also offering discounts on its wearables and accessories.

Users will also get coupons worth Rs. 100 and Rs. 500 at 10am every day. There's also a Re. 1 flash sale which will happen at 11am and 5pm each day, the app-only Bid to Win contest between 2pm and 6pm, and the Fastest Fingers First contest at 4pm throughout the sale. We have the full details for all the deals right here.

Jio Phone could turn out to be more expensive than you think
The Jio Phone has been hailed as the best thing to happen to feature phones since sliced bread. And while that may be true to an extent, the 'effectively' free phone might cost you a lot more in the long run than just Rs. 1,500. The company has put up the terms and conditions on its website for returning Jio Phone units, which have revealed the fine print involved with the process. In order to get that Rs. 1,500 refund after three years, you'll have to spend at least Rs. 4,500 on recharges over a period of time. Also, if you wish to return the phone within the first year, there's a penalty of Rs. 1,500, plus taxes.

For a quick rundown of the most important points from the Jio Phone's terms and conditions, we have a list ready for your consumption.

LG K7i with 'Mosquito Away' technology launched in India
We expected LG to launch the K3 (2017) and LG K4 (2017) but instead, it surprised everyone with a new offering which no one saw coming. Presenting the K7i, a budget-level smartphone priced at Rs. 7,990 whose highlight feature is a 'Mosquito Away' technology. As the name suggests, the rear speaker produces 30KHz ultrasonic frequencies which is said to repel mosquitoes. It even comes with a stand, so you can have it at your bedside. As for specifications, the dual-SIM smartphone runs Android 6.0 Marshmallow and features a 5-inch OnCell display, a quad core processor coupled with 2GB of RAM.

Indian Mobile Congress kicks off in New Delhi
India just got a taste of its very own Mobile Congress, which the Telecom minister Manoj Sinha, hopes to convert into an annual event. The Mobile Congress is designed to be a platform for mobile, Internet, and technology companies to showcase their new technologies in this three-day long event. Among the top executives from various telecom operators, Himanshu Kapania, the managing director of Idea Cellular, walked to the podium to address "the elephant in the room," referring to Reliance Jio. Without calling out any names, Kapania pointed fingers at a telecom operator that has been "bundling data for free, offering voice calls for free," for the decline in revenue in the telecom industry as of late, the "first" he has seen in the 22 years of his experience in the space, he said.

Reliance Chairman Mukesh Ambani also spoke on Day 1 of the Indian Mobile Congress, where he urged executives from other technology companies in India and the government to work in tandem. He talked about how "data is the new oil" and that "India does not need to import it" since we have it in abundance. Ambani was also very optimistic about the spread of 4G, as he said, "4G coverage in India will become larger than the 2G coverage within the next 12 months." The RIL chairman made the point that it has to be ensured every Indian has access to an affordable smartphone.

iOS 11.0.1 update out, iPhone 8 crackling issue
As expected, Apple has released its first update after the global roll out of iOS 11 on September 19. the update fixes some of the early teething issues where certain users were not able to send emails through their Outlook.com or Exchange mail account using the iOS 11 Mail app. The update is available to all compatible iPhone and iPad models, including the new iPhone 8. Speaking of which, several users of Apple's latest flagship have been complaining about a crackling sound coming from the handset's earpiece that is causing a disturbance on phone calls. Apple has acknowledged this issue and is said to be working on a fix for it.

Zopo launches Flash X1, Flash X2 with 'infinity' displays in India
Bezel-less are currently the hot trend among smartphone manufacturers and Zopo is quick to jump on this band-wagon. It's new Flash X1 and Flash X2 are priced at Rs. 6,999 and Rs. 8,999 respectively and feature 18:9 aspect displays. The Zopo Flash X1 sports a 5.5-inch display with a resolution of 640x1280 pixels while the Flash X2 packs a 5.99-inch display with 720x1440 pixels display. Specifications are pretty entry-level which include MediaTek SoCs and 2GB of RAM.

Kaspersky has also got its foot in the door with its first smartphone called TaigaPhone which costs RUB 15,000 ($260 or roughly Rs. 17,000) and is said to be 'surveillance-proof'.

Bill Gates has made the switch to Android
With Microsoft's Windows 10 Mobile platform stuck in limbo, former CEO, Bill Gates seems to have had enough and has finally made the switch to Android. This was revealed in an interview with Fox News. Although he didn't share the exact Android handset that he is using as his daily driver, the reference to "lot of Microsoft software" in the interview points to the Microsoft edition of either Samsung Galaxy S8 or Galaxy S8+, which were launched in April this year.

Google Pixel 2, Pixel 2 XL features leaks ahead of launch
We're now less than week before Google reveals its new smartphones and the leaks have started trickling in. A source has reported that the new phones will ship with a redesigned launcher while a separate source claims that the Pixel 2 and Pixel 2 XL  will sport dual stereo speakers on the front, a new Always Listening Music recognition feature, and a Portrait Mode for the camera.

MediaTek unveils quad-core MT6739 SoC at IMC 2017
In a bid to get a better foothold in the entry-level smartphone space, MediaTek launched its MT6739 SoC designed for mid- to entry-level 4G smartphone users at the ongoing India Mobile Congress 2017 in New Delhi. Some of the highlight features includes an advanced WorldMode LTE Cat. 4 modem, dual-camera photography and 18:9 display. It's a quad-core 64-bit ARM Cortex-A53 processor and operates up to 1.5GHz. In addition to MT6739, MediaTek is also introducing its Helio P23 chipset to India.

Asus VivoBook S15 and ZenBook UX430 laptops launched in India
Asus has added a few new models to its laptop portfolio in India, with the launch of the VivoBook S15 and ZenBook UX430. These laptops belong the premium laptop segment with starting prices of Rs. 59,990 and Rs. 74,990 for the base variants, respectively. Some of the highlight features includes a bezel-less 'NanoEdge' display. The laptops are available in a range of Intel's eight-generation CPUs, RAM, storage and graphics configurations. The company also launched the ZenBook Pro UX550VE, which is said to be the "fastest, thinnest, and lightest ZenBook Pro" that it has ever made.