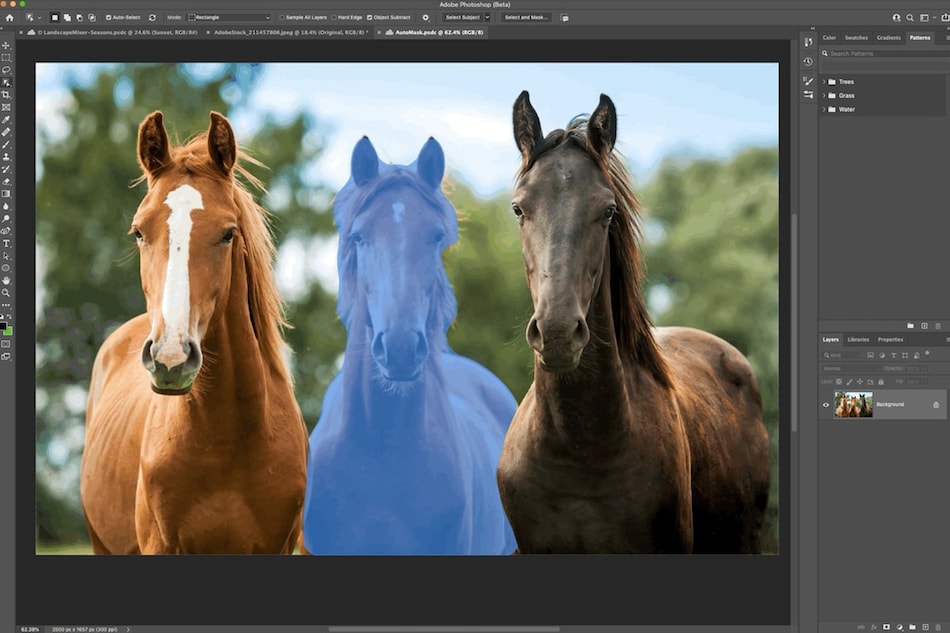 Photoshop and Illustrator are getting greater interoperability and tons of new features to enhance your creativity, Adobe announced. It announced the updates to Photoshop and Illustrator at its Max 2021 virtual conference on Tuesday. Alongside Photoshop and Illustrator, Adobe updated Fresco with a Motion feature. Lightroom has also added premium preset packs, while After Effects has added features including Multi-Frame Rendering and Speculative Preview. Photoshop Express is also getting features including a Makeup toolkit. There are also updates to Content Authenticity Initiative — the programme that Adobe announced two years back to help combat visual misinformation and protect digital rights of content creators.

Adobe has improved Photoshop on desktop with an updated Object Selection Tool that lets you select an object by just hovering over it on the image. There is also a new Mask All Objects option in the Layer settings to let you generate masks for all the objects detected within your layer with a single click. Additionally, Photoshop has included new Neural Filters that use the company's Sensei AI machine learning to provide an enhanced photo editing experience. These new filters are currently available in beta stage, though the company has promised to improve them over time on the basis of user feedback.

One of the most interesting beta Neural Filters is Landscape Mixer that helps users to create new scenes by combining two landscape images. There is also a Colour Transfer filter that transfers the colour from a reference image to an original one to provide a distinct touch and feel. For realistic composites on the basis of machine learning inputs, there is a Harmonisation filter. It adjusts the hue and luminosity to create new results.

Photoshop has also added support for Apple's Pro Display XDR to provide full, high dynamic range, along with more richness. The MacBook Pro (2021) models are likely to get better photo editing through the update as they come with the Pro Display XDR.

The new MacBook models and other Apple devices that are based on the company's M1 chips have also received an improved Export As functionality on the latest Photoshop version. It is touted to be faster than evern and built on top of a new set of export APIs to provide better colour profile handling and side-by-side comparison between export settings.

Adobe has also announced better interoperability between Photoshop and Illustrator by allowing copying of vector shapes such as rectangles, polygons, circles, lines, and compound paths from Illustrator to Photoshop.

“We also have support for compound paths, shapes, using Pathfinder, and clipping masks. Additionally, groups and layers are pasted into Photoshop as closely as possible as authored in Illustrator,” the company said in a blog post.

Photoshop has also received improved language support for type layers that have unified typographical support for scripts and languages across the world, including Arabic, Hebrew, Indic scripts, Japanese, Chinese, and Korean.

In addition to changes aimed at desktop users, Photoshop for iPad has been updated with support for Camera Raw files. Users can now also import and adjust their raw photos from the iPhone 12 Pro and iPhone 13 Pro models (ProRAW) or your digital cameras directly on an iPad. Further, Photoshop for iPad has the ability to let you convert existing layers into smart objects so that your transformations and filters don't change on a layer-by-layer basis and stay non-destructive.

iPad users additionally get the Dodge and Burn tools to adjust range for shadows, midtones, brush roundness, and angle directly on the pixels of your image. You can use the new tools on curves adjustment layers, and even with black/ white layers with blend modes.

Separately, Photoshop has now reached the Web to let users access their important editing tools on a Web browser. Users can also receive comments from their team on the edits they're working on through the new Web offering.

Alongside Photoshop, Adobe announced updates coming to Illustrator. These include overhauled 3D effects that are available for access through an updated panel. There is also a Substance 3D assets homepage to find and download the most relevant 3D illustrations and design material for your work.

The updated Illustrator includes a font auto-activation that is designed to activate missing fonts that are available in the library when a document is opened.

Adobe has also updated Illustrator on the iPad with a preview of Vectorise. This helps convert any image into a vector graphic and is useful if you want to create sketches as a part of your work. There are also new brushes to let you create and develop artistic or calligraphic brush strokes to your illustrations.

The iPad version of Illustrator has also added an object blent feature to blend one shape into another. You can also transform an object into a shape by changing its paths and curves, without having to manually manipulate each anchor point.

Adobe has also included rulers and guides, version history, and option to place linked PSD files from Photoshop or Fresco into a document. The Illustrator update for iPad also includes the ability to cut and paste text or graphics between Photoshop, Fresco, and Adobe Illustrator — as a part of the interoperability.

Lightroom has added new premium presets that are available in eight new categories, namely Black & White, Food, Landscape, Urban Architecture, Lifestyle, Retro, Travel II, and Cinematic II. These are aimed to enhance your photos, without adding any additional efforts. The presets are available for the Lightroom Classic as well as its macOS, Windows, iOS, Android, and the Web counterparts.

Adobe also introduced a Community Remix feature for macOS and Windows users that allows you to receive inputs on your photos from the community.

The desktop version of Lightroom has also included crop overlays support. Moreover, Adobe has introduced Lightroom Academy as a resource for photographers to learn new concepts and improve their skills.

Premiere Pro has also been updated with a new feature called Simplify Sequence that lets users create a clean copy of their current sequence by removing gaps, unused tracks, user-designated clips, or effects. It helps copy existing projects or while sharing, exporting, or archiving old projects. The updated Premiere Pro also carries a new colour management for H.264 and HEVC formats that includes 10-bit and HDR media from modern mirrorless cameras and current iPhone models. There are additions such as Lumetri improvements including Colourised Vectorscope and curve refinements to provide smoother playback on new Apple and Windows machines.

Adobe is also bringing its Remix feature that it earlier provided on Audition to Premiere Pro in beta. It helps rearrange songs to better align with the video, without manually applying razor cuts and crossfades. The feature uses Adobe Sensei AI technology to analyse the audio patterns and dynamics in songs and use them to generate new mixes with defined durations.

Editors on Premiere Pro can also animate puppets on screen using a new Body Tracker feature within Character Animator. Additionally, there is Puppet Maker to let animators create new characters for their moves in the video, without using Photoshop or Illustrator.

Adobe introduced updated After Effects at its Max 2021, with features including Multi-Frame Rendering that lets users preview and render shots simultaneously — by taking advantage of their systems. The updated After Effects also include Speculative Preview for automatically rendering compositions in the background, Composition Profiler for highlighting the layers and effects in designs that are resulting in delayed processing time.

After Effects has also received a reimagined Render Queue that provides additional information about in-progress renders and sends notification alerts to users when the rendering process is completed.

There is also Scene Edit Detection in beta that automatically identifies edits in a rendered clip and places markers at the cut points or separates the clips into individual layers, the company said.

After Effects has also received native support for Apple silicon in beta to provide improved performance on new Mac computers, including the latest MacBook Pro models.

Adobe Fresco has also added the Motion feature to let users move their drawings on the free app. It lets you apply a timeline to individual layers and add frames of motion to each layer to move objects. There are also three new vector brushes with a ‘jitter' effect that creates unique edges for adding additional texture and personality to your strokes.

For making colouring faster, Fresco has also added Reference layers where you will get colours and effects you should apply to your drawing.

At this year's Max, Adobe is also updating Photoshop Express with the Makeup toolkit that brings options for lip colours. The existing smart cut tool on the updated Photoshop Express also gets the ability to automatically detect the edges of different objects to easily select two or more objects to cut and place in your new image.

In addition to new product announcements, Adobe at its Max 2021 has brought updates to the Content Authenticity Initiative. One of the major additions is Content Credentials through which the company will provide and access digital content provenance and attribution. The new feature is coming in beta for millions of Adobe creative users, the company said.

With Content Credentials, users on Photoshop for desktops will get capturing edits as an opt-in feature to capture edits and identity information from their working images. Adobe has also created a website verify.contentauthenticity.org through which anyone can inspect the overview and details of an image and its Content Credentials.

Additionally, Adobe has partnered with the non-fungible token (NFT) marketplaces KnownOrigin, OpenSea, Rarible, and SuperRare to display Content Credentials and allow collectors to see the original creators of the listed assets.