Google says that the new features will be rolled out in the coming months. 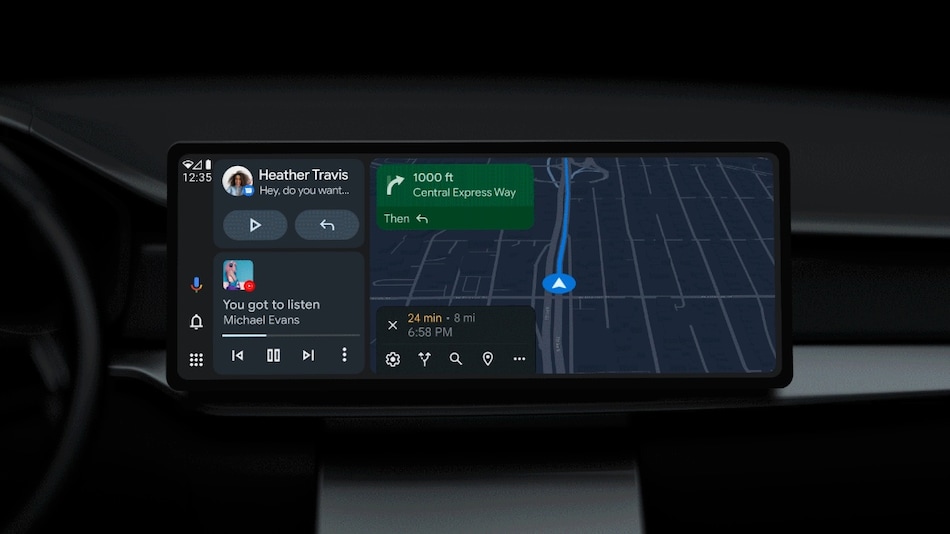 Google has announced that Android Auto — the platform which allows drivers to access music, media and navigation apps on car infotainment system screens, and cars that have Google built-in — will be getting a string of new features later this year. Android Auto features include a new user interface, and support for suggested responses that are based on Google Assistant's contextual suggestions. For those who have cars that have Google built-in will be able to enjoy watching videos through the YouTube app in the coming months.

As per the announcement made by Google at I/O 2022, Android Auto will get a new user interface that will essentially put all the important functionalities that drivers prioritise in their cars — navigation, media and communication — on one single screen. Google says that this change will help in making the driving experience safer. The new look, which is expected to roll out later this summer, will show maps, media player and communications apps on the same page.

The apps will be placed adjacent to each other in a split screen mode. Google says that the new Android Auto interface design is able to adapt to different screen sizes — widescreen, portrait and more. This will mitigate the need to return to the home screen and/or scroll through a list of apps in order to open a desired functionality.

In the current scenario, it becomes difficult for a person, who is using Maps for navigation on Android Auto, to return to the home screen and open another app, say WhatsApp for checking messages. By doing this, the Maps navigation interface goes in the background and the chances of missing an important turn are increased. With navigation and media ‘always on', the chances of missing a turn while shuffling through other apps will be reduced.

In the case of the second feature, Google seems to have found a way to further integrate the power of Google Assistant in Android Auto. With the virtual assistant's contextual suggestions, drivers can now choose suggested replies for messages, sharing arrival times with a friend, or even playing recommended music more efficiently in the car. This feature will be available alongside the already present voice replies functionality.

For cars that come with Google built-in, the company is preparing to roll out two new functionalities in the coming months. Building on its previous announcement of bringing YouTube to cars with Google built-in, Google said more video streaming apps, including Tubi and Epix Now, will join the queue. This will help drivers to watch videos directly from their car display. Although the details are not clear, it seems that drivers will only be able to watch videos when their cars are parked, and not while they are driving.

The second feature for cars that have Google built-in is giving the drivers the ability to browse the web directly from your car display, and cast their own content from their smartphones to their car screen.