G Suite apps such as Google Docs, Slides, and Sheets get handy updates for both Android and iOS users. 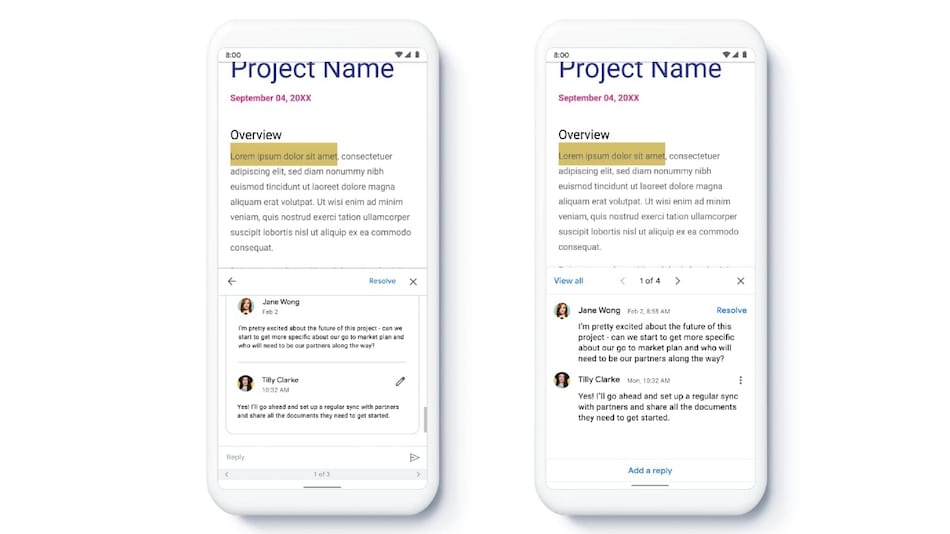 You’ll be able to resolve or reply to comments directly within the message.

Google has started rolling out several new features for its G Suite apps on mobile platforms. These are designed to help make working on Google Docs, Sheets, and Slides much easier on the go. The freshly added features include Smart Compose, link previews, vertical navigation, dark theme, comments interface, and more. All G Suite customers will be able to access these features on Android or iOS devices, as the updates are gradually rolled out. Google said in a blog post that the new features aim to help mobile users “efficiently create, collaborate, and communicate.”

Here's a look at the new features introduced in Google Docs, Sheets, and Slides

Smart Compose: This AI-powered tool will help reduce spelling and grammatical errors, and write faster. This feature was made available on the Web earlier this year and is now launching for mobile phones as well. Google said that the Smart Compose will be available on Android and iOS users within a few weeks.

Link previews: Clicking on a link in Google Docs will now show a dynamic card with information about the content, such as thumbnails, owner details, latest activity of Drive file, titles, and more. You can do all of this without having to leave the app, thus not disrupting your reading flow. This feature is available on iOS and will be rolling out to Android within a few weeks.

Comments response: You will now see an up-to-date comment threads around documents in Gmail that you can resolve or reply directly, though the message. This feature was introduced on the Web last year by Google and will now be available for Android and iOS mobile apps as well.

Comments interface: Google has improved the interface for comments, making it easier for team members to collaborate. The new interface makes it easier to scroll through, respond to comments, and @mention others. This is available on Android and will be rolled out to iOS within a few months.

Vertical navigation: You can now look at slideshows in a vertical stream in slides, using pinch-to-zoom feature. This will help make reviewing presentations faster and make it easier to switch to editing or presenting content. This will be available on Android within the next few weeks, and on iOS in the next few months.

Dark theme: Dark theme is supported in Docs, Sheets, and Slides on Android, and will be available on iOS in the coming months, according to Google. This feature rolled out in July.