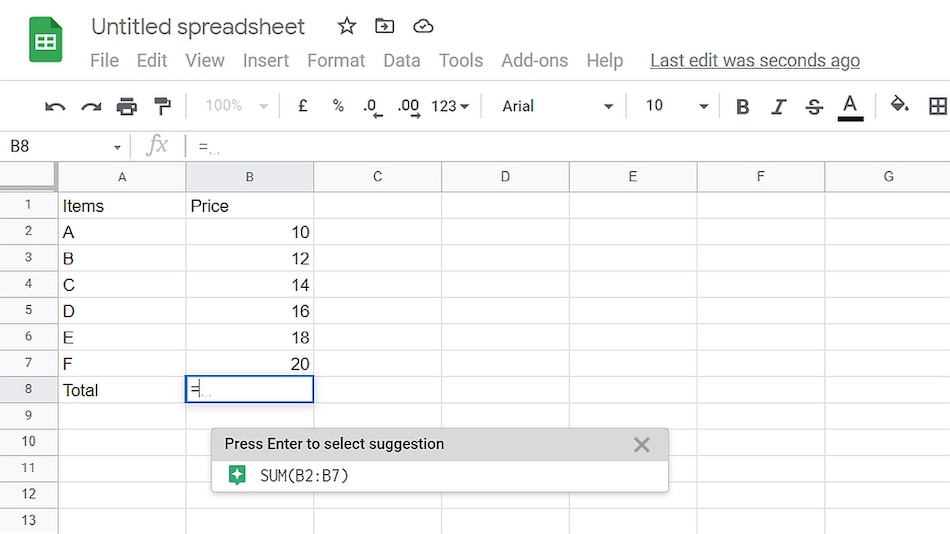 Google Sheets can now automatically suggest formula based on the content

Google Sheets is getting an update that will make it easier for it to suggest "in-line, sequential, context-aware suggestions for formulas and functions." The search giant notes that these formula suggestions will help analyse data much quicker. The feature started rolling out for users on August 25 and it has a gradual rollout schedule. Google said that it trained a machine learning (ML) model with anonymised data from spreadsheets to help create these formula suggestions.

The update for Google Sheets was announced through a blog post. It mentions that the new formula suggestions will make it easier to "write new formulas accurately and help make data analysis quicker and easier." Google mentions that by simply inserting a formula in Sheets, suggestions will be automatically displayed while a user is typing in the cell. It will also show additional incremental suggestions in the drop-down menu.

Google told the Verge that Google Sheets suggestions can also identify headers and analyse how data is grouped to get an idea of what to suggest to the users.

The new formula suggestion tool will be available for all Google Workspace, G Suite Basic, G Suite Business, and Personal users. As mentioned, the update for Google Sheets started rolling out on August 25. Google will conduct a gradual rollout and it will take up to 15 days for all users to receive the new feature. Gadgets 360 was able to view the feature on the app. Once received, users can activate it by heading to Tools > Enable formula suggestions. Alternatively, formula suggestion can also be activated from the three-dot menu of the suggestion dialogue box.

Back in June, to celebrate Pride month, Google Sheets added a fun easter egg that transformed a plain white spreadsheet to showcase the Rainbow flag. If you type 'PRIDE' across the Google Sheet columns, you should be able to spot the easter egg.