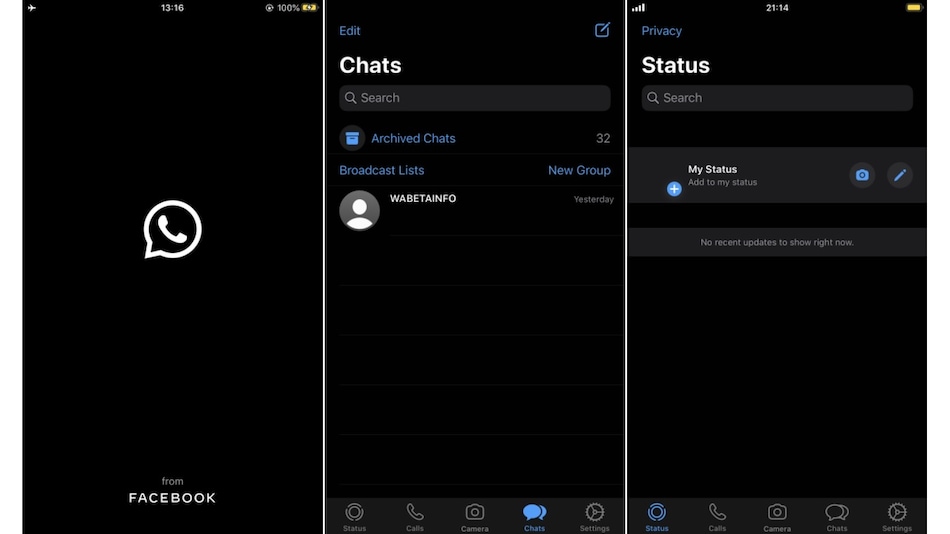 WhatsApp has received a new beta update for its iPhone client that makes the Dark Mode feature widely available to users. The previous WhatsApp beta update reportedly made the feature available to only a small bunch of users. In addition to expanding the availability of dark mode, the fresh beta update also adds solid colours for chat wallpapers, background blur effect, advanced search mode, and brings back the context mode with haptic touch support. Some of these changes have already made their way to WhatsApp's beta build for Android.

WABetaInfo reports that WhatsApp v2.20.30.25 beta update has been released for users who are members of Apple's TestFlight beta testing programme. As mentioned above, the update brings Dark Mode to WhatsApp for iPhone and finally adds the dark splash screen with a redesigned WhatsApp logo. Chat lists, bubbles, and wallpapers are among the UI elements that get a dark overlay. Moreover, solid colours for chat wallpapers have also arrived, and the Share section also gets a dark UI overhaul.

For iPhone users, they can also mimic the dark theme design by enabling the Increase Contrast feature from the phone's Settings app. In addition to the dark mode, the latest WhatsApp update now also blurs the current wallpaper when users have selected multiple messages to delete or forward.

Another notable feature that arrives with the WhatsApp v2.20.30.25 update for iPhones is the Advanced Search Mode that has reportedly been in development for quite some time. The Advanced Search Mode allows users to search for specific message types and look through media stored on the phone. Users can choose between Grid and Captions view while using Advanced Search Mode on WhatsApp. Lastly, the context menu also makes a return, complete with haptic touch support.

However, do keep in mind that that this is a beta update we are talking about. In case you are looking forward to becoming a beta tester and trying out the dark mode on WhatsApp for iPhone, you are out of luck. Apple's TestFlight slots for beta testing WhatsApp are currently full, and there is no word when more members will be accepted.