The new WhatsApp feature will be an addition to the already available 7 days option. 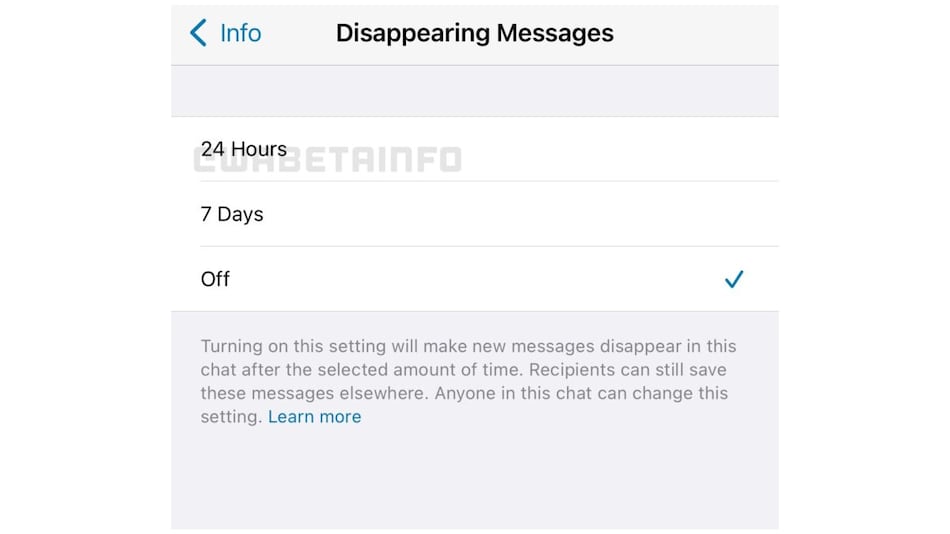 WhatsApp is now testing a 24 hours option for disappearing messages on Android, iOS, and Web/ desktop, as per a report. The instant messaging app already has an option that allows users to set a week's (7 days) time for disappearing messages. With this option, WhatsApp now competes with rival apps like Telegram that give users multiple options to choose from. Recently, WhatsApp was reportedly spotted testing a voice messages playback speed feature on the public beta channel. However, it was removed in the subsequent beta update.

As per a report by WABetainfo, a platform that tests WhatsApp features in beta and publishes information about them, WhatsApp will not replace the 7 days option and add the 24 hours option. The screenshot shared by the platform shows the 24 hours option in the section where users enable/ disable disappearing messages for personal and group chats.

WhatsApp earlier used to only let admins control Disappearing Messages. Recently, it released an update for iOS that allows all participants in a group to change the Disappearing Messages setting by default. WhatsApp is also testing the ability to bring disappearing photos feature to both Android and iOS platforms.

Elon Musk Set to Host Saturday Night Live With Miley Cyrus as Musical Guest
Captain America 4 in the Works With The Falcon and the Winter Soldier Duo: Report