In April 2020, WhatsApp had doubled the group voice call participation limit to eight from the earlier limit of four. 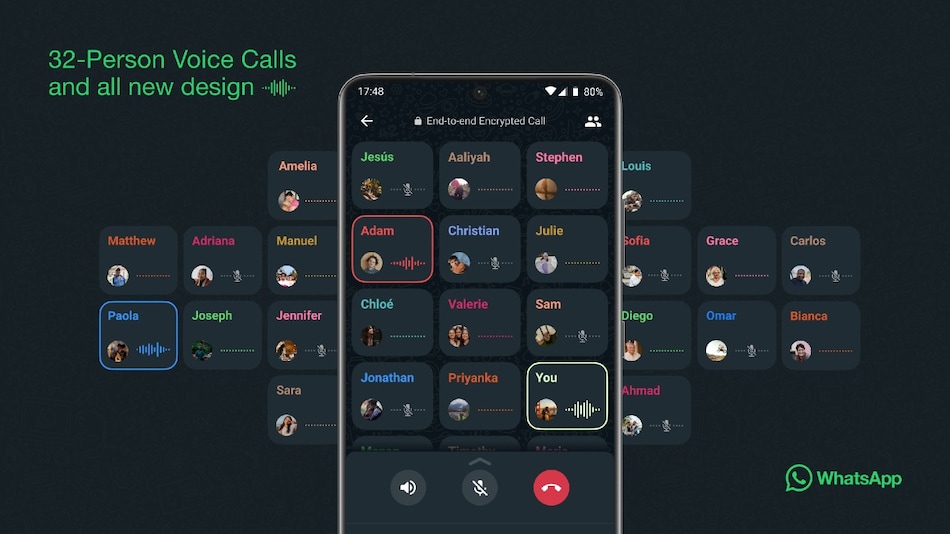 WhatsApp now lets you add up to 32 participants to group voice calls, a step on its roadmap to expansion into WhatsApp Communities feature. This is among a host of new features that the social media messaging platform is said to be bringing out. WhatsApp last increased the group call participation limit in 2020. Other features that are reportedly under development or in the beta testing stage include a new caption view when sending media and the ability to include more recipients within a chat thread, a redesigned location sticker, an option to save disappearing messages, more emojis for message reactions, and advanced settings to manage your privacy settings.

Users will now be able to add up to 32 participants during voice calls in WhatsApp, as spotted on the App Store changelog as well as on the FAQ page of Android and iPhone on the WhatsApp site. In April 2020, WhatsApp had doubled the group voice call participation limit to eight from the earlier limit of four. To access the latest feature, users will have to update to the latest version of WhatsApp on their devices, that is, v22.8.80 on iPhone and v2.22.9.73 on Android.

As per the WhatsApp v22.8.80 for iPhone changelog on the App Store, the group voice call interface update brings with it a social audio layout, speaker highlight, and waveforms, as seen in the story image above. The changelog also details updated designs for voice message bubbles and info screens for contacts and groups, apart from other small improvements such as accessing your favourited media in gallery. To recall, WhatsApp announced the upcoming group voice call participant limit increase when it announced its expansion for Groups - WhatsApp Communities - last week.

It is interesting to note that one of WhatsApp's biggest competitors, Telegram, doesn't have a limit to the number of participants on a group voice call.

In the meanwhile, as we mentioned, several potential new features have been spotted in beta updates by WhatsApp beta tracker WABetaInfo. The first of these, spotted in beta v2.22.10.6 for Android, WhatsApp is said to be refining the caption view with a focus on the recipients. The feature is said to be rolling out to select beta testers only for now. Earlier, users couldn't select different recipients while sending a media from a chat. The option was restricted to when you were using the camera tab. The new update will let users send photo, video, or GIF to contacts within their chat thread and you can now select other people as recipients. The messaging platform from Meta has also redesigned the way you choose the audience for your status updates. WhatsApp is now presenting a view where the users can conveniently pick a different audience for their status updates. The feature is yet to rollout widely.

The beta tracker also spotted an under-development feature in WhatsApp v2.22.10.7 for Android - a redesigned location sticker under the ‘Content Stickers' section in the drawing editor. WhatsApp is expected to use Android APIs to generate your location to produce the content stickers. Users can place the stickers on their photos prior to sharing them. The location stickers could be similar to the location stickers produced by Snapchat. The feature is not yet visible to beta users.

With beta v22.9.0.72 for iOS, WABetaInfo reports that the company has been spotted working on a feature that let users keep disappearing messages. Users who still want to keep a chat after its expiration can remove the expiration from a disappearing message. In case either party in the chat don't want the messages to be saved, they can choose to un-keep it - immediately deleting it for everyone. The feature is disabled by default, and not accessible to beta testers at the moment.

Next, in beta v2.22.10.9 for Android, WhatsApp has been spotted developing the option to give users more emoji to choose when emoji reacting to messages. While the first version of emoji reactions that is expected to rollout to users will be limited to just six emojis - like, love, laugh, surprise, sad, and thanks - the latest version spotted in testing appears to give access to the entire emoji keyboard when users tap the plus button. The wider emoji reaction palette is not yet available to testers.

WhatsApp in its v22.9.0.70 beta update for iOS also began rolling out advanced settings to manage user privacy to some beta testers, WABetaInfo reports. The settings will let you have better control over your last seen, about, and profile photo among others. The feature was spotted on beta v2.22.8.9 for Android at the end of March, so we can expect the feature to roll out soon across both platforms