Best True Wireless Earphones Under Rs. 5,000 in India: Nokia vs OnePlus vs Realme vs Oppo 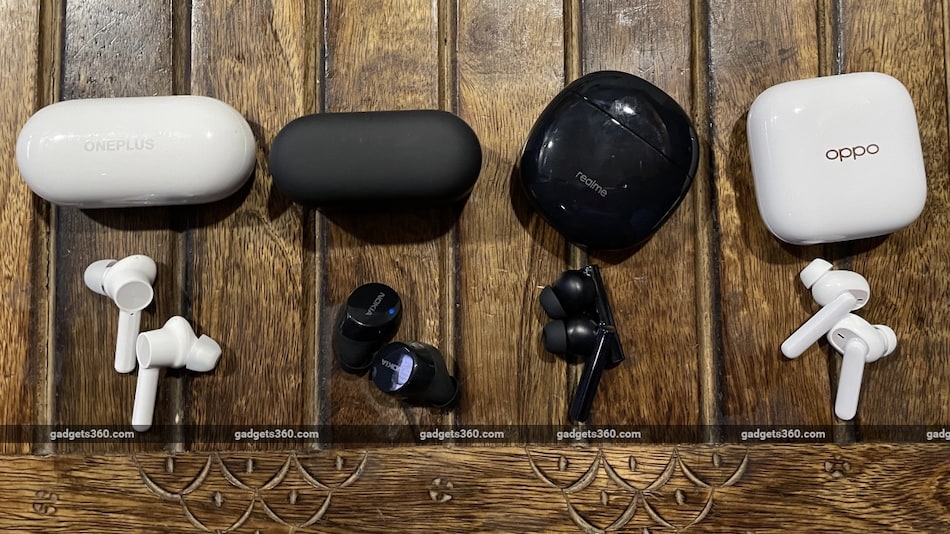 These four options are the best true wireless earphones you can buy for less than Rs. 5,000

The true wireless earphones segment is constantly changing, often looking completely different to what it was even a few weeks previously thanks to frequent new launches. While this evolution affects all price segments, I tend to see the most innovation and the best value-for-money additions in the budget segment, particularly on true wireless earphones priced under Rs. 5,000. Over the last few months, I've seen and reviewed a number of pairs of interesting true wireless earphones with impressive features and performance, all priced affordably.

Usually costing anywhere between Rs. 3,000 and Rs. 5,000, the options in this list are among the best affordable true wireless earphones you can buy in India right now. In this article, I'm comparing the Nokia Power Earbuds Lite, OnePlus Buds Z, Realme Buds Air 2, and Oppo Enco W51. Which one of them will stand out the most? Read on to find out.

The most affordable of the true wireless earphones in this list is the OnePlus Buds Z, which is priced at Rs. 2,999. The Realme Buds Air 2 and Nokia Power Earbuds Lite are priced at Rs. 3,299 and Rs. 3,599 respectively, while the Oppo Enco W51 is the most expensive of these four options at Rs. 4,999. It's worth noting that these products are often available at lower prices during sales, but prices usually don't go higher than the listed amounts.

These are all online-focused brands, and so all these true wireless headsets can be purchased easily on at least one of the major e-commerce portals in India. Some of the options here may be listed on the brands' own websites, and some have limited offline availability as well.

While the OnePlus, Oppo, and Realme earpieces have stalks that extend downwards, the Nokia Power Earbuds Lite stands out in this lot because of its bulkier earpiece design that doesn't have a stalk. All four headsets also have touch controls, with the Nokia and OnePlus headsets having large and distinct touch-sensitive zones that are a lot easier to use than the narrow ones on the upper parts of the stalks of the Oppo Enco W51 and Realme Buds Air 2.

As is usually the case with true wireless earphones, all four options have plastic earpiece bodies and charging cases, and varying levels of water resistance. If you're particularly concerned about water exposure, the Nokia Power Earbuds Lite is the best of the lot with IPX7 water resistance; the earpieces are rated to be able to survive being submerged fully in shallow water for short periods of time with no risk of damage.

Although not as good as the Nokia Power Earbuds Lite, the others all have some level of dust and/or water resistance as well – IP55 for the OnePlus Buds Z, IPX5 for the Realme Buds Air 2, and IP54 for the Oppo Enco W51.

All four options have an in-canal design, which ensures good noise isolation, a secure fit, and effective active noise cancellation in the case of the Realme and Oppo headsets. I found all of the earpieces here to be light enough and comfortable to wear over long periods of time. Extra ear tips are included in the boxes with all four options as well.

Each of these headsets also has its own unique features that set it apart. The OnePlus Buds Z has fast charging and Dolby Atmos support, the Nokia Power Earbuds Lite has the aforementioned IPX7 water resistance, the Realme Buds Air 2 has ANC and a very good companion app, and the Oppo Enco W51 has ANC and wireless charging for the case.

Codec support is a key point on any wireless headphones and earphones, since this plays a big part in the quality of the sound. The SBC and AAC Bluetooth codecs are supported on the OnePlus, Realme, and Oppo headsets, while the Nokia Power Earbuds Lite falls a bit short in this department with support for only the SBC codec. All four options allow direct access to the default voice assistant on your paired smartphone.

Most budget true wireless earphones don't really need an app given the limited features they have that can be customised. Of the four headsets in this list, only the Nokia Power Earbuds Lite doesn't have a companion app; the OnePlus Buds Z, Realme Buds Air 2, and Oppo Enco W51 all have some kind of app support for basic controls and customisation.

The best app experience here is offered by the Realme Buds Air 2. It uses the Realme Link app to allow customisation of its touch controls, and you can also cycle through noise cancellation modes and activate other features such as the low-latency gaming mode and different sound modes. You can also turn on or off the in-ear detection and update the earphones' firmware, making this the most feature-filled app among the options here. It's worth pointing out here that the Realme Link app on iOS doesn't support audio products at the time of our review, so all of these features are only available on Android smartphones.

The OnePlus Buds Z and Oppo Enco W51 both use an app called HeyMelody, which although a bit odd-looking and strangely laid out, covers the basics such as control customisation, battery level display, and firmware updates. You won't often need to use this app after the initial setup of the earphones, since practically all features on both headsets can be controlled through the earpieces themselves.

Although the Nokia Power Earbuds Lite doesn't have a companion app, I don't hold that against it. Its controls are easy to learn and use, and there are no significant features that need to be customised or controlled; this simplicity could even be considered a positive point.

Battery life on all of the earphones in this list is as expected for budget true wireless headsets. The OnePlus Buds Z and Nokia Power Earbuds Lite ran for over four hours per charge of the earpieces, while the Oppo Enco W51 and Realme Buds Air 2 ran for just over three hours. The difference is due to the presence of active noise cancellation on the latter two headsets, which needs a significant amount of power to work.

The Nokia Power Earbuds Lite is, therefore, definitely the one you should get if battery life is important even if the case is a bit larger than those of the other options on the list. The charging case of the Realme Buds Air 2 has the most convenient size and shape, making it the most pocketable.

Two key aspects go into the quality of sound that true wireless earphones can produce – Bluetooth codec support, and driver tuning. The OnePlus Buds Z, Realme Buds Air 2, and Oppo Enco W51 all support the AAC Bluetooth codec, while the Nokia Power Earbuds Lite is limited to just the SBC codec. However, the overall listening experience doesn't correlate to this perfectly, with a couple of surprises in how the headsets line up in terms of sound quality in this competition.

The best sound quality comes from the Oppo Enco W51, which isn't too surprising given that it is the most expensive true wireless headset here. I found the sound cohesive, energetic, and detailed, making this among the best-sounding true wireless earphones you can buy for the price right now. Active noise cancellation performance is basic but functional; it does make it a bit easier to listen to music in somewhat noisy environments.

The next best option here is the most affordable one, the OnePlus Buds Z. The sound is enjoyable, with decent detail and a safe sonic signature that works well for most popular genres. The bass is strong and punchy but not overbearing; the tuning is good and OnePlus has made proper use of the AAC Bluetooth codec to deliver a good listening experience. Dolby Atmos support with some OnePlus smartphones is a useful bonus, if you have access to Dolby Atmos Music tracks and other supported content.

Despite the lack of support for the AAC Bluetooth codec, the Nokia Power Earbuds Lite still does a decent job in terms of sound quality. The sound is clean, the bass is tight, and really the only thing missing, in my experience, was something entirely indescribable; the Power Earbuds Lite didn't bring out that edge that better headsets such as the Oppo Enco W51 often managed to do.

The Realme Buds Air 2 is my least favourite pick among the four options here when it comes to sound quality. Although the sonic signature is safe and clean, and bass can get strong, there wasn't much detail to be heard. The sound was dull at low volumes, and the highs tended to be a bit shrill, making every listen a bit of a mixed bag of emotions. Active noise cancellation is worth mentioning especially given the price of the Buds Air 2, but performance is expectedly basic.

It isn't too hard to come up with a single winner for this comparison – the Oppo Enco W51 is objectively the best true wireless headset among the four I pitted against each other here. With good sound quality, active noise cancellation, and wireless charging, this is the best value-for-money option you can buy for under Rs. 5,000, even if it's a bit more expensive than the rest of the headsets on this list.

If you're looking for something more affordable, the OnePlus Buds Z is an excellent pick at its price of Rs. 2,999. Sound quality is good, and features such as fast charging and Dolby Atmos support make this a worthwhile headset even if you don't have a OnePlus smartphone, and particularly so if you do. If you specifically require good water resistance or superior battery life, the Nokia Power Earbuds Lite will suit you better.

The Realme Buds Air 2 offers active noise cancellation for just Rs. 3,299, making it a seemingly good value-for-money proposition. However, the cons outweigh the pros on the whole, and I'd recommend one of the other three options here over this.