Are these the best ‘flagship killer’ true wireless earphones you can buy today? 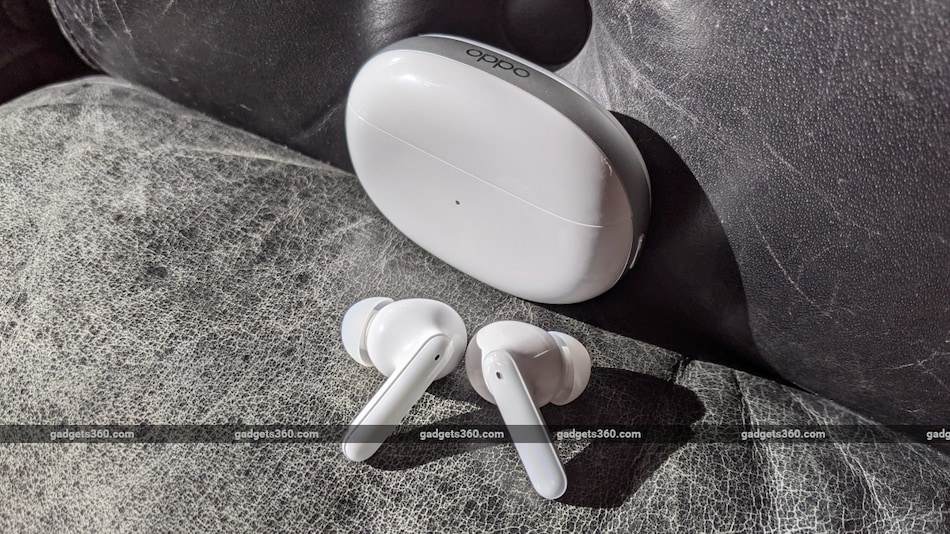 The Oppo Enco X goes up against competition from Apple, Sony, and Sennheiser, but at a much lower price

Although Oppo is best known in India for its smartphones, the company's growing audio lineup is one to look out for. Among its recent launches, a noteworthy product was the Oppo Enco W51, which is among our top picks in the affordable true wireless segment for one key reason: active noise cancellation for under Rs. 5,000. Like with its smartphones, Oppo is looking to build a strong presence in the mid-range segment for true wireless earphones, and its latest launch is the one I am reviewing today.

Priced at Rs. 9,990, the Oppo Enco X is positioned as a ‘flagship killer' among true wireless headsets, thanks to a rather impressive specification sheet. With a dual-driver setup, tuning in collaboration with Danish high-end audio brand Dynaudio, and active noise cancellation, the Enco X promises a lot for a price that is considerably lower than what brands such as Apple, Samsung, Sony, and Sennheiser offer. Is this the best pair of true wireless earphones you can buy for under Rs. 10,000 in India right now? Find out in our review.

The Enco X earpieces look a lot like the AirPods Pro, especially in white

Dual-driver setup and Dynaudio expertise for the Oppo Enco X

The Apple AirPods Pro is likely the inspiration for the design of many true wireless earphones, and it's safe to assume that the Oppo Enco X is on that list. The glossy white earpieces with short stems are similar in shape to Apple's flagship true wireless earphones, but they do look different thanks to large silver charging contact points and a glass-like finish on the stems. The Oppo Enco X earpieces have a proper in-canal fit, with a total of three sets of silicone ear tips and a charging cable included in the sales package.

The stems of the earpieces are touch-sensitive, and can be used to control playback and volume on the Oppo Enco X. These can be customised directly through the settings on an Oppo smartphone, or through the HeyMelody app on other Android smartphones. The earpieces were comfortable over long listening sessions, and fit well for me.

The app covers the basics including control customisation, battery levels for the earpieces and charging case (the levels for the case seemed inaccurate to me, though), firmware updates, and a earbud fit test to make sure you're using the right ear tips. It's worth pointing out here that there is no iOS app, so if you don't have an Android device, there's no way to customise the touch gestures and you'll have to stick to the default controls.

There is active noise cancellation on the Oppo Enco X, which uses a dual-microphone system to offer two levels of intensity – Regular and Max – as well as a transparency mode to be able to hear ambient sounds through the earphones. There are actually three microphones on each earpiece, which are used for calls and environmental noise cancellation for voice. Each earpiece weighs just 4.8g, and I found them quite comfortable in my ears for long listening sessions, with a secure, noise isolating fit. They're also IP54 rated for dust and water resistance.

The controls aren't entirely customisable through the app; instead, you have to choose from predefined sets for the double-tap, triple-tap, and slide control gestures. What irked me was the inability to have play/pause, next/previous, and volume controls at the same time; I had to choose between combinations that skip one of these options. I chose to do without play/pause, since removing one or both of the earpieces pauses what's playing anyway.

I had a white unit for review, and there's also a black option which naturally looks much less like the AirPods Pro. The charging case is a matching shade of white, but also has a contrasting metallic silver band running all around the narrow side. The top of this band has the Oppo logo, the side has the pairing button, and the bottom has the USB Type-C port for charging. Usefully, there's also support for Qi wireless charging on the case. The back of the case has ‘co-created with Dynaudio' etched on it, to mark Oppo's development collaboration with Danish high-end audio manufacturer Dynaudio for the Enco X.

Under the hood, the Oppo Enco X has its most impressive specification – dual drivers in each earpiece, comprised of a 6mm balanced membrane driver for the high frequencies and an 11mm dynamic driver for the mids and lows. The earphones use Bluetooth 5.2 for connectivity, with support for the LHDC, AAC, and SBC Bluetooth codecs.

LHDC is an advanced Bluetooth codec that's said to be on par with LDAC and aptX in terms of transfer rates and latency, but isn't widely supported on devices yet. Oppo states that the Find X2 and Find X2 Pro support the codec for now, and more Oppo devices will gain support through firmware updates over the coming months. Another device I know of that supports the codec is the Xiaomi Mi 10 (Review), but compatibility is rare, and you'll have to likely rely on the more widely available AAC Bluetooth codec.

Battery life on the Oppo Enco X isn't too impressive, with the earpieces running for a little over three hours at moderate volumes with active noise cancellation on. The charging case added an additional four charges for a total battery life of around 16 hours per charge cycle, which is far below what competing devices in this price range such as the Jabra Elite 75t offer.

Although the concept of dual-driver setups isn't new, it's still unusual on true wireless earphones for obvious reasons; it's difficult to fit more than one driver in the limited space available in each earpiece. Oppo's solution is therefore an impressive engineering feat that delivers good sound across genres and sources. Combined with decent active noise cancellation and Dynaudio's expertise, this makes for an immersive and engaging listening experience.

I didn't have any LHDC-compatible devices with me to test this advanced codec with. For my review, I used the more common AAC codec with an iPhone 12 mini (Review) and OnePlus 7T Pro McLaren Edition (Review), testing with music across streaming services, videos, games, and voice calls.

Tidal's high-resolution music streams did have some impact on sound quality on the Oppo Enco X thanks to the drivers and tuning. However, my being limited to the AAC codec meant that it wasn't quite as much a difference as on the aptX-compatible Sennheiser CX 400BT, with just hints of more detail and slightly tighter responses than you'd get with basic SBC.

Battery life is average on the Oppo Enco X, with only around 16 hours of total listening time per charge cycle

However, that shouldn't be construed as taking anything away from the sound; the Oppo Enco X sounds great despite this. KC and the Sunshine Band's disco classic That's The Way I Like It sounded detailed and cohesive, with excellent instrument separation and a spacious soundstage, as would be expected from any multi-driver earphones. Having a separate balanced membrane driver for the upper range of frequencies meant that the highs – particularly the trumpets – sounded crisp and clear, and were felt as much as heard.

The lows and mids were similarly detailed and punchy. The entire sound was held together cohesively and managed to keep pace with even fast and detailed tracks such as Fatboy Slim's Bem Brasil version of Weapon of Choice. The various samba drums took centre stage within the luxurious soundstage, but this at no point overpowered the vocals that are the essence of this track, with the two elements playing well with each other.

The same track on Spotify sounded a little less immersive and tight, but by no means less enjoyable. Even with the compression and lower bitrate, the Oppo Enco X held firm when it came to detail, sonic signature, and soundstage. Switching to Brasstracks' electro-jazz cover of All Of The Lights confirmed that the crisp highs, tight lows, and general cohesiveness in the sound remained firmly in place.

The sonic signature of the Oppo Enco X can be defined as somewhat balanced, but the unique driver setup does tend to give the highs and lows a bit of an edge over the mid range. Although the differences in responsiveness aren't much, this sonic signature does definitely favour certain genres of music that rely on bass and instrumentals; most electronic genres, jazz, and anything with a strong focus on percussion sounded impressive. Synth-driven tracks such as Streamers by Wave Racer sounded particularly good, with the Oppo Enco X capturing the essence of the computer-generated sounds to near perfection.

Active noise cancellation on the Oppo Enco X isn't quite on par with what I've heard on premium options such as the Apple AirPods Pro and Sony WF-1000XM3, but it's also significantly better than the entry-level ANC performance of the Oppo Enco W51. Typical household sounds and the buzz of urban streets were considerably softer with ANC active, but there wasn't the kind of stark silence you'd get with premium true wireless headsets.

There are two levels of active noise cancellation, and the one I preferred was the ‘Max' mode; the ‘Regular' mode barely made any difference in reducing noise. There is also a transparency mode which lets you hear ambient sounds through the earphones. While this does make you more aware of your surroundings, it doesn't sound as natural as on the AirPods Pro, with my own voice in particular sounding strangely muffled.

The Oppo Enco X was quite good for voice calls, with clear sound on both ends of the call. Thanks to Bluetooth 5.2, connectivity was stable over reasonable distances as well, and I could listen to music or conduct phone calls over distances of up to 15 feet even with some barriers in between. The earphones are also quick to pair with the last used device on being taken out of their case.

At Rs. 9,990, the Oppo Enco X delivers a great listening experience for the price

Oppo's audio product range is quite underrated, and with the Enco X the company has another hit. With good features, decent active noise cancellation and voice performance, and exceptional sound for the price, the Oppo Enco X is among the best true wireless headsets you can buy in the mid to premium price segment today. Although below-average battery life, oddly limited controls, and niche codec support do hold it back a bit, the sound quality you get from the dual-driver setup makes up for these drawbacks.

WhatsApp May Retain Only 18 Percent Users Amid Privacy Row: Survey
Facebook to Appoint Turkey Envoy to Comply With Media Law