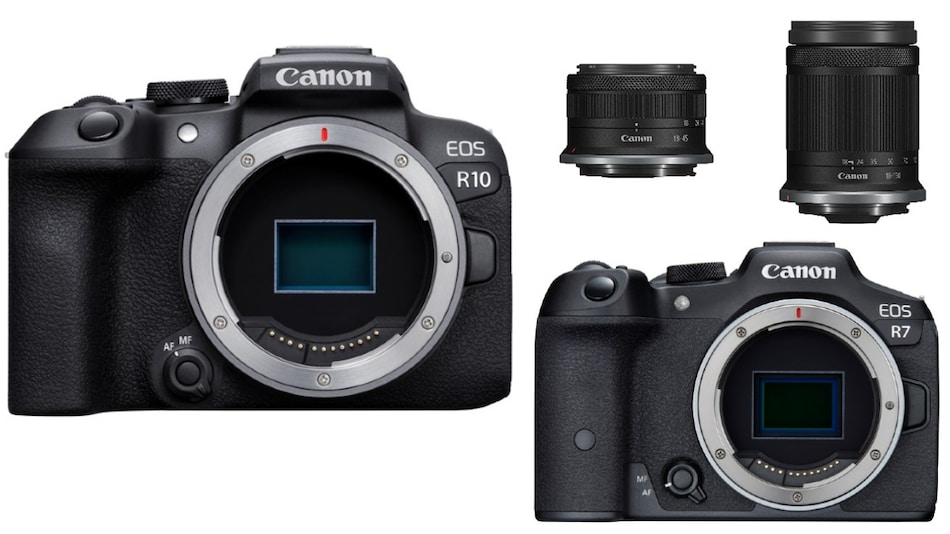 Canon EOS R7 and Canon EOS R10 mirrorless cameras were launched in India on Tuesday. The Japanese company says that these are the first cameras in the EOS R mirrorless system to come equipped with APS-C image sensors. Alongside these new cameras, Canon has also launched two new kit lens options: the RF-S18-45mm F4.5-6.3 IS STM and RF-S18-150mm F3.5-6.3 IS STM. These new lenses can also be mounted directly onto full-frame Canon EOS R system cameras.

These Canon products will be available for purchase in July 2022.

The Canon EOS R7 comes equipped with a 32.5-megapixel sensor, and features an in-body image stabilisation, weather-sealing as well as dual SD card slots. The Canon EOS R10 has a smaller form-factor and gets a 24.2-megapixel sensor as well as a built-in flash. Both the cameras have DIGIC X image processing engine, and a new autofocusing (AF) technology for a responsive and reliable autofocusing. Canon says that both the cameras are capable of high-speed continuous shooting (up to 15fps) in mechanical and electronic first-curtain shutter modes (with AF/AE tracking).

Both Canon EOS R7 and Canon EOS R10 cameras feature a RAW burst mode that captures full-resolution RAW images at up to 30fps. The mode supports pre-shooting, which starts recording the scene up to 0.5 second before the shutter is released, the Japanese company says. The Canon EOS R7 is said to be the first APS-C EOS camera to feature the sensor-shift type 5-axis In-Body IS mechanism. Additionally, both the cameras feature Movie Digital IS, which conducts 5-axis image stabilisation for vibration-free videos.