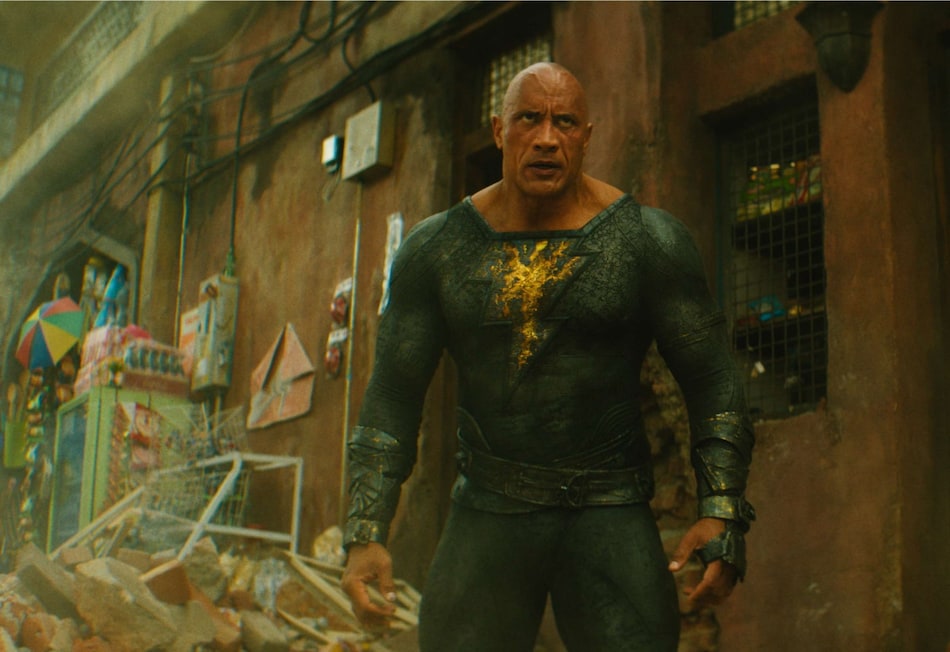 Black Adam, starring Dwayne Johnson, has got to be one of the most overhyped DC films to date — billed as the one to change the “hierarchy of power” in the universe. The marketing campaign here is nuts, with Warner Bros. pumping out TV spot-fashioned clips, while The Rock makes appearances at random events to plug his Zoa energy drink. Black Adam releases October 21, in cinemas. Following close behind is the Viola Davis-led The Woman King, which sees director Gina Prince-Bythewood resuming action-oriented filmography. The Woman King is set to debut October 14 in theatres.

On the Bollywood end, we've got the Ayushmann Khurrana-led Doctor G, a campus medical comedy that sees Anubhuti Kashyap making her directorial debut. Will she leave a mark as prominent in Indian cinema as her brother Anurag? Find out when it premieres October 14 in theatres. Tere Bin Laden filmmaker Abhishek Sharma forays into the action genre, teaming up with Akshay Kumar to create an adventure film of sorts, in the vein of Indiana Jones. Ram Setu drops October 25, in theatres.

The month of October has even more great titles in store for us that are not listed below, including the latest in the Predator franchise. Prey follows a highly skilled female warrior, who sets out to protect her tribe from an unknown, advanced alien. Currently, there's no telling if Disney+ Hotstar will release the film in both English and Comanche dubs, as in the US.

For your convenience, we have curated the biggest October 2022 releases coming to theatres, Netflix, and Amazon Prime Video, which you can check out below.

When: October 6
Where: Cinemas

Following their troubled romance in Ocean's Eleven, George Clooney and Julia Roberts reunite in this rom-com as a divorced couple, who travel to Bali to sabotage their daughter's wedding. Or more specifically, prevent her from committing the same mistake as theirs, 25 years ago. To play the devil's advocate here, Lily's (Kaitlyn Dever) parents have a right to be concerned, seeing as their precious daughter is about to marry off a local, Gede (Maxime Bouttier), whom she just met recently.

And so, putting aside their differences, the pair call a truce, in hopes of tricking her into dumping the guy. This would involve drastic measures such as pocketing the wedding rings, portraying him in a bad light, and above all else, maintaining a not-so-aggressive relationship throughout the trip. A good reference point would be Adam Sandler's 2014 film, Blended, which saw an unlikely middle-aged couple bonding over the course of a vacation, thanks to the fun activities that plague such exotic tourist spots.

Ol Parker — best known for the musical comedy Mamma Mia! Here We Go Again — directs Ticket to Paradise, so maybe we could expect some stellar dance sequences, albeit with licensed TikTok-ish music.

When: October 6
Where: Prime Video

Here's another wedding-themed title. A devout housewife's public image is shattered when a newly-surfaced rumour threatens to destroy her son's marriage plans. Pallavi Patel (Madhuri Dixit) is the quintessential, middle-aged woman, notorious for her Garba dancing skills, as she is for her cooking. When her son Tejas (Ritwik Bhowmik) brings home a proposal to marry a rich, NRI girl, all the attention in Baroda gets fixated on the middle-class family. Despite the monetary setback, the in-law's father (Rajit Kapur) agrees to the engagement, simply because he is smitten with Pallavi and can continue seeing her.

While not clearly specified, the Maja Ma trailer hints that a video with sexual implications surfaces online on the eve of the party, causing turmoil amongst both families. Plans to cancel the engagement are put in motion, which is odd, given the American in-law was clearly sexually attracted to Pallavi. Director Anand Tiwari — star of Go Goa Gone — bases this struggle as the crux of the story, with Dixit's housewife contesting societal norms and establishing her own identity. One that hasn't been imposed upon her by neighbours.

When: October 14
Where: Cinemas

Known for her commanding persona, Davis plays General Nanisca, leading the all-female warrior tribe of the Agojie, against foes who threaten to violate their honour, enslave their people, and threaten to destroy everything they have built. Set in 1800s West Africa, this historical drama chronicles the uprising of her unit, as she prepares for an all-out war against the Oyo Empire, who were known for trading slaves off to the Europeans.

Actress Maria Bello (Lights Out) conceived the idea for The Woman King, after visiting Benin, where the Dahomey Kingdom used to be located. Pairing up with Dana Stevens (Fatherhood), she put together a story in 2015, only to be met with disapproval from several studios, owing to financial concerns — understandable, given the costume and makeup costs to emulate a real army of warriors. This marks the second team up for Davis and Bello, who previously starred as concerned mothers in Denis Villeneuve's Prisoners.

Directed by Prince-Bythewood, the majority of the lead lineup is populated with women, except for John Boyega (Star Wars: The Last Jedi), who plays King Ghezo, the ruler of Dahomey. The film also stars Lashana Lynch, Thuso Mbedu, Sheila Atim, Jayme Lawson, and Adrienne Warren.

When: October 14
Where: Cinemas

Uday Gupta (Ayushmann Khurrana), a medical college student, reluctantly finds himself as the lone male in the gynaecology department. Wanting to specialise in orthopaedics, he finds himself amidst the chaos, ridicule, and occasional ragging from his fellow classmates. This is on top of the judgemental looks he gets from patients and nurses, who aren't used to seeing a male gyno. Saving grace comes in the form of his teacher (Shefali Shah, from Delhi Crime), who advises Uday to change his mindset and “lose the male touch.”

When: October 21
Where: Cinemas

Enslaved and imprisoned in Kahndaq for 5,000 years, Teth-Adam wakes up in the modern world, as the incarnation of Black Adam, hellbent on unleashing his unique form of justice. Harnessing the almighty powers of ancient Egyptian gods, the free anti-hero gets into a scuffle with the Justice Society, shooting jolts of electricity and smacking down anyone who crosses his path.

Black Adam would be the first-ever feature film to explore Superman's dark, lightning-honing nemesis, alongside the JSA. The organisation, headlined by Aldis Hodge as Hawkman and Pierce Brosnan as Doctor Fate, has another figure pulling the strings at the top — Amanda Waller (Viola Davis), who has now established herself in a recurring canon role in the DC Extended Universe.

The film was originally planned for a 2021 release, but the timeline got delayed due to the pandemic. Black Adam also stars Quintessa Swindell as the wind power-honing Cyclone and Noah Centineo as Atom Smasher, capable of manipulating his molecular structure at will. At this point, we could only wish for Zachary Levi's Shazam to make a cameo. That would be fun!

When: October 25
Where: Cinemas

In a quest to save the titular Ram Setu, an atheist archaeologist turned believer (Akshay Kumar) embarks on an action-filled odyssey, through hostile jungles, cryptic tunnels, and stellar landmarks, submerged deep within the ocean.

According to the epic Ramayana, the mythical limestone bridge was built by Lord Rama's army, in an effort to reach Sri Lanka and rescue his wife Sita from the clutches of the demon king Ravana. Paired with Jacqueline Fernandez as an unnamed character, the film centres on his obsession to prove its existence, and provide evidence through research that the structure is man-made.

Director Abhishek Sharma has reportedly been trying to create a plot since 2007, as he became aware of a court case involving Ram Setu. The film marks Amazon's first Bollywood production in India, and will naturally end up on its Prime Video streaming platform, following its theatrical run.