Setting up Eternals 2 and beyond. Plus, a voice cameo from the future. 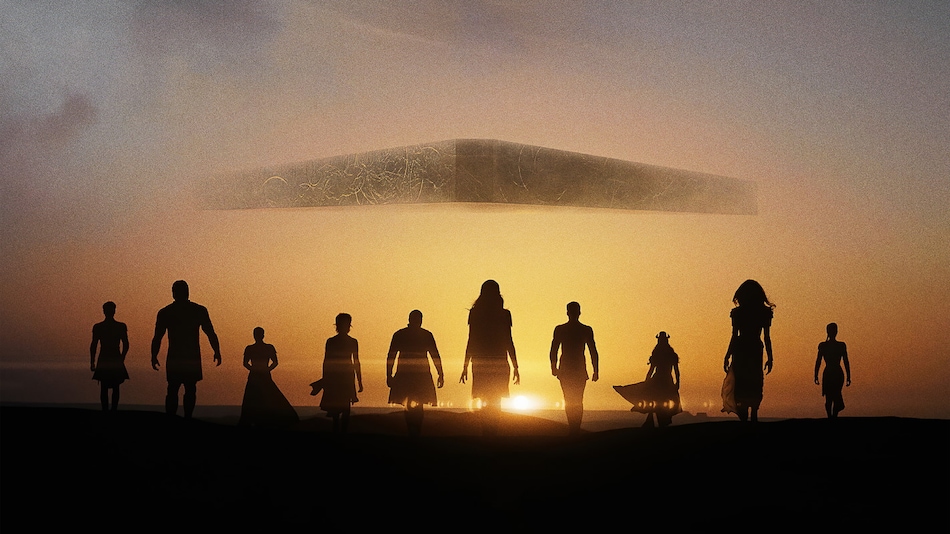 The Eternals have a big future in the Marvel Cinematic Universe

Eternals — out now in cinemas worldwide — brings a new superhero ensemble to the Marvel Cinematic Universe, starring an ensemble that includes Gemma Chan, Richard Madden, Kumail Nanjiani, Salma Hayek, and Angelina Jolie. Even though it makes references to MCU events and characters Eternals is an entirely standalone experience for all of its 156-minute runtime. That said, as with all things MCU, Marvel Studios has bigger plans for the film's new characters. One of the big Eternals post-credits scene surprises has already been spoiled — that too weeks before Eternals premiered in theatres. The other one teases the future of an actor who had a cameo on Eternals, alongside another who's set to join the MCU in a couple of years.

Warning: major spoilers ahead for Eternals. Proceed at your own risk.

The new Marvel movie ends in London, with Sersi (Gemma Chan) bidding goodbye to her friend Sprite (Lia McHugh) who is off to school, now that she's chosen to be human. This is clever on Marvel's part as it allows McHugh to hold onto her role — since the Eternals are immortal, they don't age. Bollywood star Kingo (Kumail Nanjiani) and his valet Karun (Harish Patel) are there to help Sprite, which is surprising for other reasons, as Kingo sat out the entire third act and no one complained.

Just as Sersi sees off Sprite, she turns around to see her boyfriend Dane Whitman (Kit Harington) waiting across the street. The two take a stroll to a nearby London park. Dane says they shouldn't have any secrets in their relationship. Sersi says she doesn't have any more secrets, only for Dane to note that he has one. But before he can tell her, they are rudely interrupted by Arishem, the Prime Celestial to whom the Eternals report.

Since the Eternals stopped the birth of Tiamut, a fellow Celestial, to save our planet Earth, Arishem is naturally quite irate with them. Arishem kidnaps the three Eternals who are still on Earth — Sersi, Kingo, and Phastos (Brian Tyree Henry) — and vows that they will face some sort of cosmic judgment for their actions. What will that involve? Only time will tell.

After the big third-act fight, three members of the Eternals — Thena (Angelina Jolie), Makkari (Lauren Ridloff), and Druig (Barry Keoghan) — get into their spaceship Domo and fly off in search of other planets in danger that they might be able to help. The mid-credits scene in Eternals picks up with the trio on their ship. Just as they sense that something is amiss, someone teleports onto their ship. It's a tiny elf who's largely talking to himself about how he needs to stop drunkenly teleporting to places.

The trio wonder why he's on the Domo. In response, a silhouetted figure follows the elf from the ether. As they walk towards the light, the elf launches into a long description of who they are and their achievements — that includes calling him brother of Thanos. At this point, Marvel fans (and those who have been reading the news) already know who it is. In steps Harry Styles, calling himself Starfox, before noting that he's an Eternal like them and his original name is Eros; and the elf's name is Pip.

All You Need to Know About Marvel's Eternals

Why are they here? Eros then brings a sphere out of his body, just like the one Ajak (Salma Hayek) and Sersi had — the one that allowed them to communicate with Arishem. Eros notes that friends are in a lot of trouble, and that he knows how to help save them. The Eternals mid-credits scene cuts right after. This is a clear and obvious set-up for Eternals 2 that Marvel has yet to announce. There might even be a standalone Starfox movie, with Styles having reportedly signed a five-film deal already.

So who is Eros/ Starfox? In the Marvel Comics, Starfox is a Titan native like his brother Thanos but he's more benevolent (usually). Like the Greek god he's named after, Eros is a womaniser — he also has the power to control others' emotions, which has resulted in some controversial storylines in the comics. Marvel has a history of tweaking characters when bringing them over from the comics though, so it's fair to expect they will do away with such problematic facets as Starfox joins the MCU.

Though Arishem's kidnapping of the Eternals gets in the way of Dane Whitman telling Sersi his secret, the audience does get to find it out in the Eternals post-credits scene. We see Dane (Harington) standing in front of a sword case. He steps back and tries to reassure himself a couple of times that he can do this. As he steps forward and opens the case, mysterious sounds bounce around the room as if some energy has been released from the sword.

An inscription within the box in Latin reads “Mors mihi lucrum.” Dane translates it for the audience as he says: “Death is my reward.” That's naturally ominous, though it will make more sense to comic book fans. As Dane reaches for the sword, some kind of supernatural particles gravitate towards his hand, just like iron filings get attracted to a magnet. Dane once again tells himself he is ready but just as he's about to touch the magical sword, an off-screen voice says: “You sure you're ready for this, Mr. Whitman?”

The Eternals post-credits scene cuts right there, without showing us the face of the actor who spoke those words. This isn't a usual Marvel practice, but that's because the face isn't ready. Eternals director Chloé Zhao has revealed that the voice is none other Mahershala Ali, who is set to join the MCU as the vampire hunter Blade. The standalone Blade film doesn't begin production until summer 2022, and Ali's voice-only Eternals appearance means his look hasn't been decided.

Ali's Eternals cameo likely means Kit Harington will be part of the Blade movie. In the Marvel Comics, Dane Whitman inherits a mystical cursed sword from his uncle — their estranged nature is referenced by Sersi on a phone call with Dane in Eternals — and then adopts his uncle's moniker, the Black Knight, as his superhero alter ego. That sword we see in the Eternals post-credits scene is no doubt the same sword.

But Harington is in the dark himself. He said: “There is no roadmap that I know of at the moment. If they have ideas about where my character goes, I'm not privy to it. All I know is that when I came on board, they said, ‘There's a really interesting future for this character, and if you read up about him, there are many different ways we could go with him.' And that intrigues me. If I look at the comics and I look at what I read on the Internet about him, I'm fascinated by the idea that any character in any story is driven by some addiction to something. And with [Dane Whitman], it's very palpable that this sword, this blade, has an addictive pull on him, and I find that really interesting.”

The Eternals post-credits scene explains what Harington is doing in what was otherwise a negligible role in this film. He's clearly been cast because he has a bigger role in the future of the MCU. What that will be remains to be seen, possibly starting with Blade.

Eternals is now playing in cinemas worldwide. In India, Eternals is available in English, Hindi, Tamil, Telugu, Kannada, and Malayalam.