The next Marvel movie is coming in English, Hindi, Tamil, Telugu, Kannada, and Malayalam. 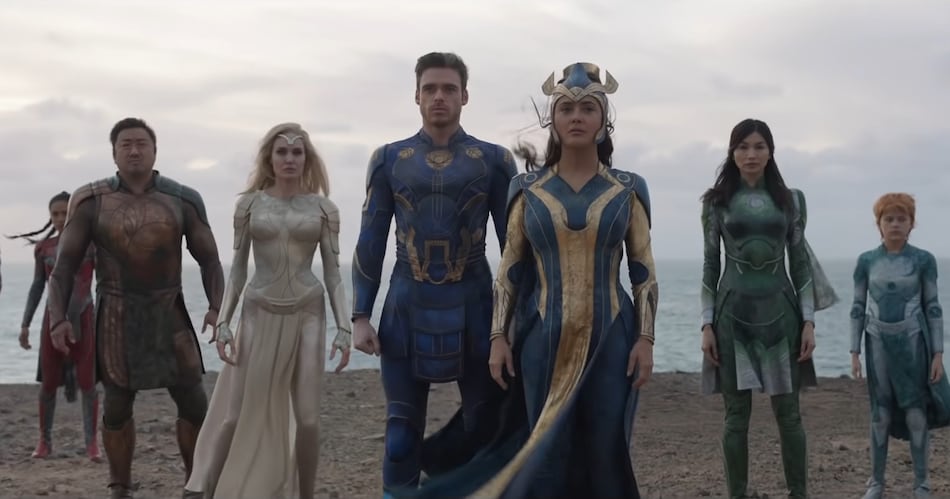 Eternals has a new release date in India: Friday, November 5. Additionally, it has been announced that Eternals will be available in six languages: English, Hindi, Tamil, Telugu, Kannada, and Malayalam. Disney India confirmed Monday that the next Marvel movie — directed by Oscar winner Chloé Zhao, and starring an ensemble cast led by Gemma Chan, Richard Madden, Kumail Nanjiani, and Angelina Jolie — will release later than it had originally planned, for October. The delay is likely due to the fact that Thursday, November 4 is Diwali this year, one of the biggest festivals in India. Disney is possibly banking on the long five-day weekend that it could result in, which could help the Marvel movie's box office potential.

The new November 5 India release date for Eternals was unveiled by Disney India alongside a series of localised posters. Eternals will be the third Marvel movie to be available in six languages, following the Scarlett Johansson-led Black Widow that skipped cinemas for a Disney+ Hotstar debut this past Friday, September 3 in English, Hindi, Tamil, Telugu, Kannada, and Malayalam. Also on September 3, Shang-Chi and the Legend of the Ten Rings premiered exclusively in theatres — in English, Hindi, Tamil, Telugu, and Kannada. Shang-Chi's Malayalam dub will release once cinemas reopen in Kerala. Given the new Eternals posters, I'd expect local-language Eternals trailers soon as well.

Lighting up the Big screens this Diwali! Eternals will arrive on November 5 in Cinemas! In English, Hindi, Tamil, Telugu, Kannada and Malayalam#YehDiwaliEternalsWaali pic.twitter.com/co1d5ffJd1

While the Diwali release for Eternals might be good for its box office gross, that does mean more wait for Indian Marvel fans. Originally, audiences in India would've been among the first ones to watch Eternals. Back in May, when Marvel Studios unveiled a return-to-cinemas marketing push in “Marvel Studios Celebrates the Movies”, the official Marvel YouTube channel for India carried an “October 2021” release for Eternals. That would've meant a week earlier than the US, and in line with a select few Asian markets, including Australia, New Zealand, Hong Kong and Taiwan. But the India release date was quietly updated in the final Eternals trailer — and it's now been confirmed.

Set in the aftermath of Avengers: Endgame as the return of half the universe's population leads to an event known as “the emergence”, Eternals follows the titular immortal alien race who have lived in secret on Earth for over seven thousand years, as they must reunite to protect humanity from their evil counterparts, the Deviants. In addition to Chan, Madden, Nanjiani and Jolie, Eternals also stars Lia McHugh, Brian Tyree Henry, Lauren Ridloff, Barry Keoghan, Don Lee, Harish Patel, Kit Harington, and Salma Hayek. Eternals will feature the Marvel Cinematic Universe's first gay superhero (Henry) and its first deaf superhero (Ridloff).

Eternals is now out November 5 in India in English, Hindi, Tamil, Telugu, Kannada, and Malayalam.