Eternals will be released in India on November 5. 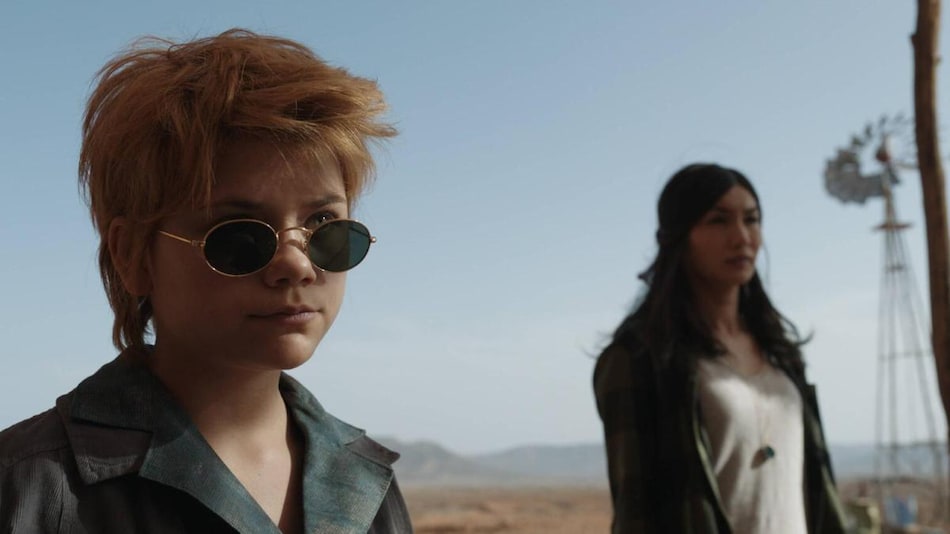 From left to right: Lia McHugh as Sprite and Gemma Chan as Sersi

Eternals, the next Marvel Cinematic Universe superhero film, is set to hit cinemas in India and around the world this week. The film is based on Marvel's superhero comic book series of the same name, and is the 26th film in the Marvel Cinematic Universe as a part of its Phase Four. The movie is directed by Academy Award-winning director Chloé Zhao and has an ensemble cast including Gemma Chan, Angelina Jolie, Richard Madden, and Kit Harington. The filming of the movie took place in Pinewood Studios in England as well as on location in London and Oxford in England and in the Canary Islands.

Eternals director Zhao had said earlier that will run for over two-and-a-half hours. The official runtime of Eternals is 2 hours and 36 minutes, making it the second longest Marvel movie, coming only behind Avengers: Endgame which had a running time of 3 hours and 2 minutes.

The characters in Eternals are all new characters to the MCU, making it a standalone movie from the rest of the MCU. Eternals will be released in English, Hindi, Tamil, Telugu, Kannada, and Malayalam in India.

With that, let's take a look at all that you need to know about Eternals, including the release date, cast, trailer, music, and more.

Eternals releases in India on November 5. The movie was first slated to be released towards the end of October, ahead of its US release. The date was later pushed to the current release date, a day after Diwali.

Eternals tickets have been live in India since the last weekend of October in India. The tickets can be pre-booked on the official websites of PVR, INOX, Cinépolis, Carnival Cinemas, and SPI Cinemas, and platforms including BookMyShow and Paytm. The movie will be released in 2D, 4DX, 3D, 4DX 3D, IMAX 3D, IMAX 2D formats. Depending on the format you pick, your location and the time of screening you choose, the price of the tickets vary from Rs. 140 to almost Rs. 1,650.

Chan essays the role of Sersi, an empathetic Eternal who has a strong connection with the Earth and to humans. She can manipulate inanimate matters and pretends to be a museum curator on Earth while dating Dane Whitman, played by Kit Harington. In an interview with Variety, Eternals producer Kevin Feige said about casting Chan, “...and if there was a lead in this ensemble, it is Sersi, it is Gemma Chan — we looked at and read all sorts of women for that part. And ended up really believing that Gemma was best for it. And thankfully, she's proven that to be the case in the final movie.”

Madden plays Ikaris, a powerful Eternal who can fly. He also has the power to project energy beams from his eyes. His other strengths include super-strength and teleportation. Together with Ikaris is Sersi, whose relationship Madden describes as “a through-the-ages love story.”

Angelina Jolie portrays Thena, another Eternal who can form any weapon out of cosmic energy.

The Eternals primary cast also includes Hayek as Ajak, the spiritual leader of Eternals, Lee as Gilgamesh, the strongest Eternal who harbours a deep connection to Thena, and McHugh as Sprite, an Eternal who has the appearance of a 12-year-old child and projects life-like illusions.

Henry stars as Phastos, an Eternal who is an intelligent weapons inventor. Phastos is the MCU's first gay superhero. Ridloff plays Makkari, an Eternal who possesses the power of super-speed and is the first deaf actor to star as a Marvel superhero. Keoghan plays Druig, an Eternal who can manipulate the minds of others.

Academy Award-winning director Chloé Zhao dons the cap of the director for Eternals. Talking about the movie, Zhao said, “I would say I pay tribute to many films and filmmakers that had great influence on me in this movie. It becomes fanfare for me. I try to let them inspire me in different parts of the movie because the film is so diverse, visually. I could do a lot of different things.”

Zhao revealed that she along with the visual effects team, the action team, and the design team watched movies including Terrence Malick's The Tree of Life (2011) and The New World (2005), Alejandro González Iñárritu's Revenant (2015), Christopher Nolan's Interstellar (2014), and Stanley Kubrick's 2001: A Space Odyssey (1968) among others.

German music composer Ramin Djawadi who composed music for films including Iron Man (2008) and Clash of The Titans (2010) scored the music for the film. Two tracks from Djawadi's score for the movie titled “Eternaks Theme” and “Across Oceans of Time” were shared on the Marvel Music VEVO channel on YouTube.

After an unexpected tragedy following the events of Avengers: Endgame, the Eternals — an immortal alien race created by the Celestials who have secretly lived on Earth for over 7,000 years — reunite to protect humanity from their evil counterparts, the Deviants.

Marvel Studios unveiled a two-minute teaser trailer for Eternals in May this year.

The first trailer RELEASED WHEN showed the Eternals' arrival on planet Earth and their range of powers.

Eternals holds an approval rating of only 58 percent based on 142 critics reviews on reviews aggregator Rotten Tomatoes. On Metacritic, Eternals has a metascore of 54 out of 100, based on 36 critics reviews, indicating ‘mixed or average reviews'.

The Gadgets 360 review of the Marvel superhero film will be available later this week.

Here is the official poster of Eternals from Disney and Marvel Studios: