Alongside Shang-Chi, Red Notice, The Wheel of Time, and The Flash season 8. 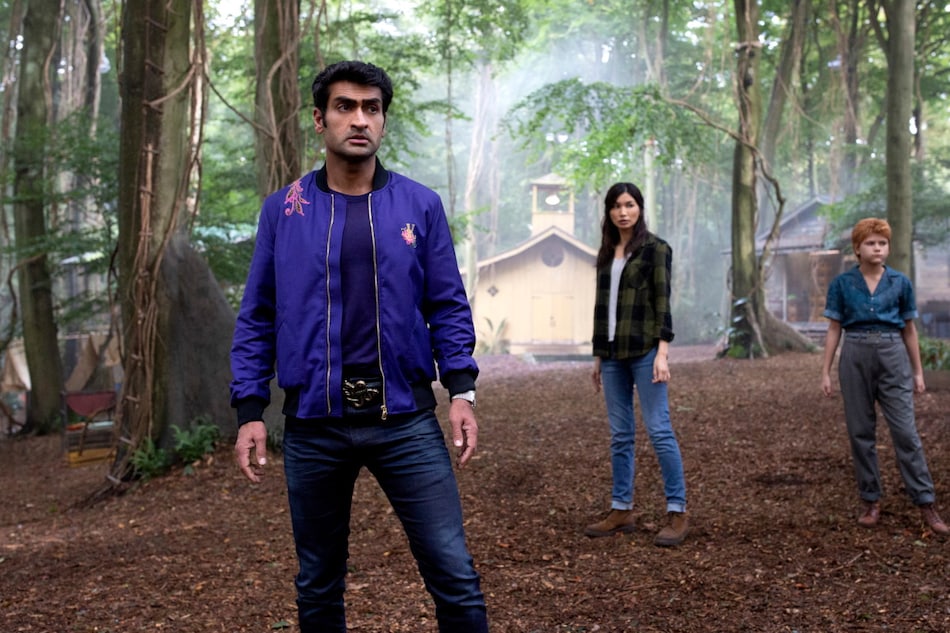 November has not one but two new Marvel releases. We will be treated to a new superhero ensemble in Eternals — Richard Madden, Kumail Nanjiani, Kit Harington, Salma Hayek, and Angelina Jolie are part of the cast — out November 5 in cinemas in India and around the world. Meanwhile, Jeremy Renner and Hailee Steinfeld star in Hawkeye that premieres November 24 on Disney+ and Disney+ Hotstar. Technically, there's a third Marvel Cinematic Universe entry — if you haven't felt comfortable stepping into cinemas, Shang-Chi and the Legend of the Ten Rings (Marvel's first film with a Chinese superhero in the lead) will be available November 12 on Disney+ and Disney+ Hotstar.

That's not all for superhero fans. From DC's long-running ever-expansive Arrowverse, we have the eighth season of The Flash in the middle of November. The Flash season 8 begins November 16 on The CW in the US, but we are as yet without a release date for India.

November also has a bunch of streaming releases from India. There's Kartik Aaryan in Dhamaka, which is the Indian remake of a South Korean thriller, releasing November 19 on Netflix. Kay Kay Menon returns as a de-aged version of Himmat Singh in Special Ops 1.5, coming November 12 to Disney+ Hotstar. And Sanya Malhotra and Abhimanyu Dassani get into a peculiar arranged marriage on Meenakshi Sundareshwar. The Netflix film ties the knot on November 5.

Elsewhere, we have Dwayne Johnson, Gal Gadot and Ryan Reynolds in the action comedy Red Notice, dropping November 12 on Netflix. Rosamund Pike leads Amazon's adaptation of The Wheel of Time fantasy novels, beginning November 19 on Prime Video. Tom Hanks is a dying inventor who builds a care robot for his dog in Finch, unfolding November 5 on Apple TV+. Andrew Garfield becomes the award-winning Rent composer in Hamilton creator Lin-Manuel Miranda's first movie as director, tick, tick...BOOM!, November 19 on Netflix. Paul Rudd and Will Ferrell are at each other's throats in The Shrink Next Door, starting November 12 on Apple TV+.

There's more you can discover below, though there's a lot more coming in November that we haven't detailed below. That includes Halle Berry's directorial debut Bruised out November 24 on Netflix, Adam Driver and Marion Cotillard in the Cannes-winning musical Annette releasing November 26 on Mubi in India, and Tessa Thompson and Ruth Negga as Black women opposite sides of the fence in Passing on November 10 at Netflix.

Beyond that, we have the third and final seasons of both Dickinson (also with Steinfeld) and Narcos: Mexico (without Diego Luna) November 5 on Apple TV+ and Netflix respectively. Dickinson season 3 will air weekly, while Narcos: Mexico sticks to Netflix's binge-release model. Additionally, Netflix will also offer Big Mouth season 5 on November 5, and Star Trek: Discovery season 4 at an as-yet undetermined date. Star Trek: Discovery season 4 begins November 18 on Paramount+.

With that, here's our November 2021 guide to Netflix, Disney+ Hotstar, Amazon Prime Video, Apple TV+, and the cinemas.

The Harder They Fall

When: November 3
Where: Netflix

Idris Elba, Jonathan Majors, Zazie Beetz, LaKeith Stanfield, and Regina King lead the stellar line-up of this ‘new-school' Western that focuses on African-Americans. In what is a comedy-drama and the debut feature for director Jeymes Samuel, an outlaw (Majors) recruits a bunch of like-minded individuals to track down and take down his ruthless nemesis (Elba) who just left prison.

When: November 5
Where: Cinemas

The next Marvel movie, from Oscar-winning filmmaker Chloé Zhao, is about the titular immortal ensemble. Created by the Celestials — we met one Celestial in Star-Lord's dad Ego on Guardians of the Galaxy Vol. 2 — the Eternals have been living secretly on Earth for over 7,000 years. Why are we seeing them now?

Well, they were told not to interfere unless their evil counterparts, the Deviants, were involved. The Deviants are back thanks to the return of the universe's half of the population — in Avengers: Endgame — that is leading to an event known as the “emergence”.

The 10 Eternals we see in Eternals are played by Gemma Chan, Richard Madden, Kumail Nanjiani, Lia McHugh, Brian Tyree Henry, Lauren Ridloff, Barry Keoghan, Don Lee, Salma Hayek, and Angelina Jolie. All of them have a variety of superpowers — from flight, super-speed, and creating weapons — that they draw from cosmic energy. Eternals also stars Harish Patel and Kit Harington.

When: November 5
Where: Apple TV+

In a post-apocalyptic world following a solar flare, one of the world's last humans and a dying inventor (Tom Hanks) builds a robot (Caleb Landry Jones, via mo-cap) who will care for his dog after he's dead. The unlikely trio then venture on a road trip across the American West.

Game of Thrones director Miguel Sapochnik is at the helm, for what is only his second feature length movie, over a decade after 2010's Repo Men. Originally meant for cinemas, Finch was eventually sold to Apple owing to the ongoing coronavirus pandemic.

When: November 5
Where: Netflix

Imagine choosing a life partner because your names together make up a famous landmark? That's what Sanya Malhotra and Abhimanyu Dassani's titular characters end up doing in this rom-com. The landmark? Madurai's famous temple “Meenakshi – Sundareshwar”.

But that's merely the start of their crazy journey. Because after a job opportunity exclusively for single men pops up in Bengaluru, Sundareshwar (Dassani) decides to leave Madurai and has to pretend to be single, while being in a long-distance relationship with his new wife.

Unfortunately, those hoping for accurate Tamil representation from a Bollywood movie — it's produced by Karan Johar's Dharmatic — have (predictably) already been disappointed following the teaser's release.

When: November 12
Where: Netflix

Skyscraper director Rawson Marshall Thurber is at the helm, renewing his collaboration with Johnson.

The Shrink Next Door

When: November 12
Where: Apple TV+

Based on the podcast of the same name that in turn was based on real-life events, Paul Rudd and Will Ferrell star in this eight-part miniseries about a dysfunctional and manipulative relationship between a popular psychiatrist (Rudd) and his long-term patient (Ferrell).

Kathryn Hahn and Casey Wilson are also part of the main cast. Michael Showalter (The Big Sick) and Jesse Peretz (GLOW) are directors, Georgia Pritchett (Veep) writes. Three episodes on release date, with the remaining ones debuting once a week until December 17.

When: November 12
Where: Disney+ Hotstar

Despite an incoherent and rudderless outing early last year, Disney+ Hotstar saw fit to greenlight a three-episode prequel to the Kay Kay Menon-led action thriller series from creator, director and co-writer Neeraj Pandey. Set a couple of years after the 2001 Parliament attack that was at the centre of Special Ops' Ikhlaq Khan chase, Special Ops 1.5 finds Himmat Singh (Menon) being called in to help RAW after the agency discovers its top brass has been duped.

All three Special Ops 1.5 episodes will drop on November 12.

When: November 16
Where: The CW

Grant Gustin's superpowered and super-speed Barry Allen is finally getting his golden boots in the eighth season — matching Arrow for season-count — that will kick off with a five-part crossover event titled “Armageddon”.

They will go up against the alien conqueror Despero (Tony Curran), and the returning Eobard Thawne/ Reverse-Flash (Tom Cavanagh) and Damien Darhk (Neal McDonough).

Though we don't have an exact date for an Indian premiere, The Flash season 8 is expected on Amazon Prime Video in India given the recent deal that brought new episodes of Arrowverse series weekly to Prime Video.

The more-than-two-decades-old jazz-inspired near-future anime series about a ragtag group of bounty hunters is getting the Netflix live-action treatment, with John Cho as Mars-born Spike Spiegel, Mustafa Shakir as his ex-cop cybernetic-arm partner Jet Black, and Daniella Pineda as a less-sexualised Faye Valentine who has massive debt from her gambling days.

Blending sci-fi and noir, Cowboy Bebop will chart their bounty hunting adventures across the solar system, all while they contend with Spike's ex-partner, power-hungry nemesis and Red Dragon gangster Vicious (Alex Hassell), and femme fatale Julia (Elena Satine) who shares a complicated past with both Spike and Vicious.

The anime's Yoko Kanno returns as composer, with “Tank!” returning as the theme song. Thor: Ragnarok and comic book writer Christopher Yost is the head writer on the 10-episode Cowboy Bebop. All 10 episodes will be available at once on November 19.

Kartik Aaryan, Mrunal Thakur and Amruta Subhash lead this Indian remake of the 2013 Korean film The Terror Live, about jaded and disgraced news anchor Arjun Pathak (Aaryan) who becomes the centre of an ongoing Mumbai attack after the terrorist calls him and delivers on a promised bombing of the Bandra – Worli Sea Link. Hoping to use the attack to get himself back in the limelight, Pathak strikes a deal with the terrorist and his ratings-obsessed boss Ankita (Subhash).

Will Dhamaka offer incisive commentary on the current state of Indian news media — or is it going to be just a straightforward thriller that Neerja and Aarya director Ram Madhvani is known for? If trailers are any indicator of a movie's direction, it's definitely tilting towards the latter.

When: November 19
Where: Amazon Prime Video

Amazon's Lord of the Rings prequel series isn't due until next September, but it's got another high fantasy series before that arrives. Rosamund Pike (Gone Girl) leads this adaptation of the book series of the same name. She plays Moiraine who has magical abilities and leads five young people on an adventure, hoping to discover a Dragon among them. The “D” is capitalised because in its universe, a prophecy says the Dragon is a powerful individual who can save the world — or destroy it.

The rest of The Wheel of Time's primary cast is largely made of newcomers and unknowns, though Money Heist fans can look forward to Álvaro Morte in a new avatar. Rafe Judkins — former Survivor contestant, and writer on Agents of SHIELD — is the showrunner and head writer. Uta Briesewitz (Jane the Virgin, Orange Is the New Black) sets the tone as director of the first two episodes.

Amazon is so confident in the eight-episode first season that it has already renewed The Wheel of Time for a second season. There are 14 books after all, and Judkins reportedly has an eight-season plan, just like the biggest fantasy series of all time: Game of Thrones. Can it hit those highs? Oof, that's a tough comparison for any series.

The Wheel of Time premieres with three episodes on November 19, with the remaining five episodes airing every Friday until Christmas Eve, December 24.

When: November 24
Where: Disney+ Hotstar

Two Marvel Cinematic Universe entries in one month. Following a months-long gap after the Tom Hiddleston-led Loki, the next Marvel Disney+ series centres on Clint Barton/ Hawkeye (Jeremy Renner), the last of the original six Avengers to get his own standalone chapter. Like Scarlett Johansson's Black Widow whose footsteps it follows, Hawkeye finds Barton training a protégé in Kate Bishop (Hailee Steinfeld) who's also an expert with bow and arrow.

And just like Black Widow, where Yelena Belova (Florence Pugh) took over from Natasha Romanoff (Johansson), Bishop will take over the Hawkeye mantle from Barton on Hawkeye. The two MCU instalments have more in common, in fact. Yelena is set to appear as a semi-villain of sorts on Hawkeye, having been set up in that role in the Black Widow post-credits scene.

Vera Farmiga plays Kate's mother, Fra Fee is the mercenary Kazi, and newcomer Alaqua Cox becomes the MCU's first Native American superhero Maya Lopez/ Echo. She can mimic others' movements, you know like Taskmaster from Black Widow. Echo might even get her own Disney+ spin-off. Joanthan Igla, of Mad Men and Bridgerton fame, is the creator on Hawkeye.

Two Hawkeye episodes on release date, followed by one each every Wednesday until December 22. In India, Hawkeye will be dubbed in Hindi, Tamil, Telugu, and Malayalam on Disney+ Hotstar.