Janhvi Kapoor's new movie is out soon on Disney+ Hotstar. 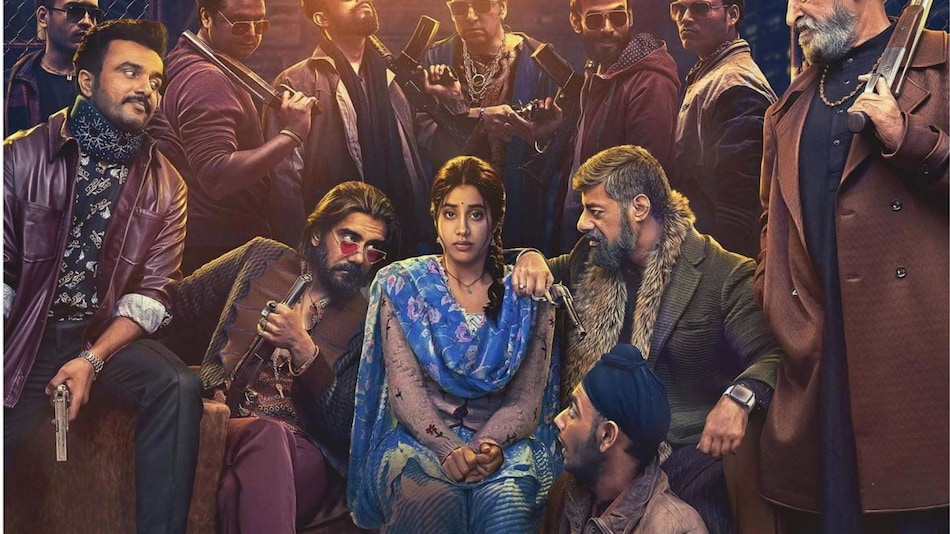 Good Luck Jerry — led by Janhvi Kapoor and out Friday on Disney+ Hotstar — marks filmmaker Siddharth Sen's foray into movies, following his stint in the ad production industry. As a debut feature, Sen has chosen to remake the 2018 Tamil film Kolamaavu Kokila, which recounts the tale of an innocent girl pulled into the criminal world of drug smuggling. Thematically, both films identify as black comedies, so the main difference here would be the setting and technical aspects — and the cast, obviously.

The Hindi-language remake, Good Luck Jerry, is based in Punjab, a state that has been notorious for its illicit drug trade. In her first collaboration with Disney+ Hotstar, Janhvi Kapoor reprises Nayanthara's role (from the original) as the titular lead, Jerry, who struggles to find a job to take care of her parents. Circumstances push her to the edge, where she is forced to traffic the "devil's dandruff" aka cocaine to make ends meet — before eventually enlisting her family into the business.

Good Luck Jerry, Koffee with Karan, and More on Disney+ Hotstar in July

In an interview, Sen touched upon his directing process — more specifically, the acting advice he offered to Kapoor: “If you really want to live Jerry, you have to live in this world, be with people who live here, behave like them, talk like them. The next moment I saw her sitting on the footpath and reading the script. I thought she was just trying to make me happy because I told her, but from that day, she literally lived there. She was sleeping on set, playing cards, learning magic tricks, riding auto rickshaws, playing cricket, literally everything.”

This was in addition to the dialect coaching Kapoor had, which would see her switching between Bihari and mild Punjabi accents, depending on the situation. Jerry is revealed to be a migrant from the state of Bihar, trying to adjust to the new culture, while struggling with problems at home. Good Luck Jerry also marks producer Aanand L Rai's second association with Disney+ Hotstar, following the Dhanush and Sara Ali Khan-led romantic fantasy drama Atrangi Re.

With that, here's everything you need to know about Good Luck Jerry.

Those interested will be required to have a subscription plan. To watch on TV, you will need Disney+ Hotstar Super that costs Rs. 899 per year.

Following her Filmfare nomination for Gunjan Saxena: The Kargil Girl, Kapoor makes another OTT appearance with Good Luck Jerry. Jaipreet "Jerry" Sethi is seen as a chirpy well-mannered girl, whose character takes a turn for the worse when her mother gets diagnosed with lung cancer. Taking advantage of her outward appearance, she turns into a fearless drug trader, stuffing contrabands inside momos, and getting involved with gangsters.

“When push comes to shove, [Jerry] is capable of a lot more than what her personality suggests,” Kapoor said in an interview detailing the family dynamics.

Deepak Dobriyal is billed second on the list as Shekhar, a close companion and admirer of Jerry. He serves as comedic relief for the film — constantly hitting on her and at a later stage, helping out with the drug trade to arrange money for treatment. His character appears to lurk about town, keeping tabs on everyone, and making connections that would help Jerry further her goal.

Good Luck Jerry to The Gray Man, the Biggest Movies in July

Mita Vashisht — who has not yet been credited — plays Jerry's mother in Good Luck Jerry, struggling to make ends meet, following her husband's demise. Upon being diagnosed with stage 2 lung cancer, the emotional lady is forced on the sidelines, leaving her daughter to do the heavy lifting as she contemplates death.

Sushant Singh plays the antagonist, a gangster looking to expand his drug empire, who crosses paths with Jerry when a high-priority order is placed.

He is joined by Sahil Mehta, who looks over the distribution and hiring of new sellers. In the Good Luck Jerry trailer, he can be seen rejecting Jerry from enrolment — claiming that the drug trade is no job for a woman.

Neeraj Sood has an undisclosed role on Good Luck Jerry.

Presenting a whirlwind journey stringing a tumultuous family, a drug mafia, multiple lovers and the police, GoodLuck Jerry is a con-medy of the survival of the wittiest when pushed to the wall. Here, chaos gets unspooled at every turn.

The official trailer for Good Luck Jerry went live on July 14, highlighting the plot beats and type of music we can expect. The trailer shows Jerry working as a masseuse before, long before her mother gets diagnosed with lung cancer. There are some quick shots of her carrying freely carrying drugs and walking past unsuspecting police officers — ultimately ending with her family getting involved.

As part of the promotions, Disney+ Hotstar also released some behind-the-scenes footage and some quirky, informational skits that have nothing to do with the actual movie.

At the time of writing, no reviews were available. Going by what we have seen in the past with Disney+ Hotstar originals, the first reviews for Good Luck Jerry are expected after release.