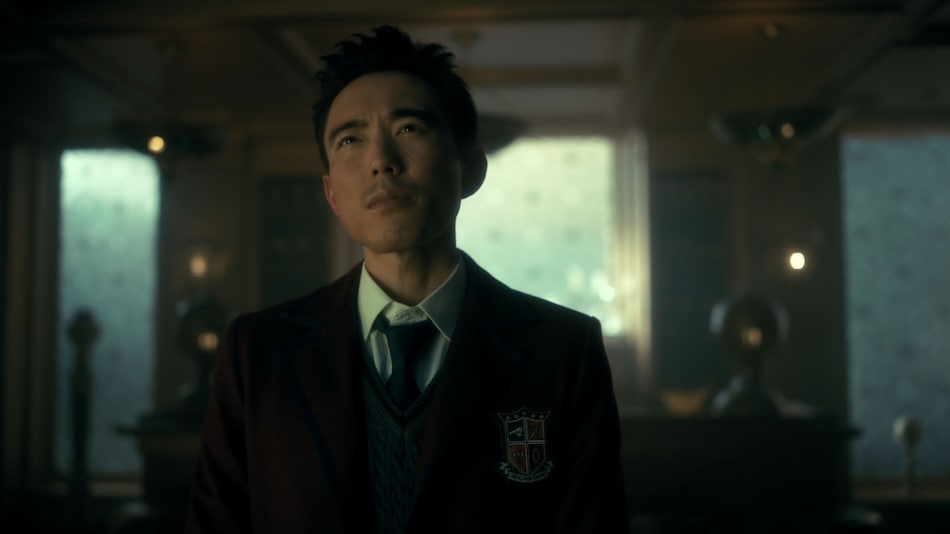 Justin H. Min as Ben in The Umbrella Academy season 3

The Umbrella Academy showrunner Steve Blackman hinted at this some time ago when he told Digital Spy: “Not only are these people saying they're the Sparrow Academy, but (Reginald) Hargreeves is still alive — and he shouldn't be, either. We love putting Easter eggs in for our fans, and there are more Easter eggs than ever this year.”

The Umbrella Academy Season 3, She Season 2, and More on Netflix in June

With that, here's everything we need to know about The Umbrella Academy season 3.

As mentioned earlier, The Umbrella Academy season 3 features 10 episodes. Going by what we saw in the previous seasons, each one of them is likely to run for about 40–55 minutes.

Here's the full release schedule for The Umbrella Academy season 3, along with directors and writers.

Elliot Page returns to The Umbrella Academy season 3 cast as the fan-favourite Vanya Hargreeves — a cis-gender woman — who will come out as transgender and transition to Viktor this season. It'll be interesting to see whether the makers are able to do justice to this aspect, given the fact that the actor did the same in real-life in 2020.

The Umbrella Academy season 3 is likely to feature many surprises
Photo Credit: Netflix

Tom Hopper, David Castañeda, Emmy Raver-Lampman, Robert Sheehan, Robert Sheehan, and Aidan Gallagher reprise their respective roles as his siblings Luther, Diego, Alison, Klaus, and Five. Justin H. Min returns as the tentacle-summoning Ben Hargreeves but there is a twist as he plays the Sparrow Academy's version of Ben, who is completely different from the one we saw in the previous seasons.

The Umbrella Academy season 3 to The Boys 3: Biggest Web Series in June

Javon Walton (Euphoria) has been cast in an undisclosed role. Expect at least some of these new additions to add a new layer to, in Blackman's words, “definitely shake things up” with their actions.

Here's the official synopsis for The Umbrella Academy season 3 via Netflix:

After putting a stop to 1963's doomsday, the Umbrella Academy return home to the present, convinced they prevented the initial apocalypse and fixed this godforsaken timeline once and for all.

But after a brief moment of celebration, they realize things aren't exactly (okay, not at all) how they left them. Enter the Sparrow Academy. Smart, stylish, and about as warm as a sea of icebergs, the Sparrows immediately clash with the Umbrellas in a violent face-off that turns out to be the least of everyone's concerns.

Navigating challenges, losses, and surprises of their own – and dealing with an unidentified destructive entity wreaking havoc in the Universe (something they may have caused) — now all they need to do is convince Dad's new and possibly better family to help them put right what their arrival made wrong.

Will they find a way back to their pre-apocalyptic lives? Or is this new world about to reveal more than just a hiccup in the timeline?

The first — and as yet only — trailer for The Umbrella Academy season 3 was released over a month ago on May 19.

It was an action-packed affair that highlighted the chaos that breaks out when the Hargreeves siblings find themselves in an alternate timeline where the titular organisation simply doesn't exist. This reality, instead, is home to the previously-mentioned Sparrows who hate our heroes.

The Umbrella Academy season 3 trailer, however, raised more questions than it answered as it did not explain what caused the Hargreeves to land in an alternate timeline.

The initial reviews for The Umbrella Academy season 3 are out. The Rotten Tomatoes critics' consensus states that season 3 retains “all the gonzo creativity” that we saw in its predecessors.

There's no official word from either Netflix or Blackman on The Umbrella Academy season 4, but it is said to be in the works.

We are, either way, likely to get a better idea of what the future holds for this series after watching the latest season, more so given that the second season had ended on a cliffhanger, setting the stage for the latest one.

Here is the official poster for The Umbrella Academy season 3, from Netflix.