The search for India’s most famous actress begins on February 25. 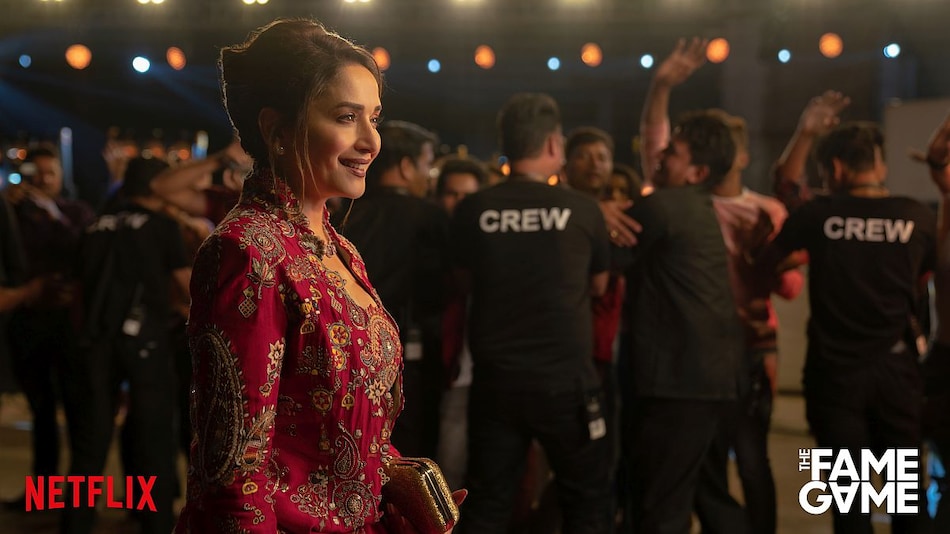 The Fame Game trailer is here. On Thursday, Netflix India revealed the trailer for the upcoming series, that will star Madhuri Dixit Nene in the lead. The show is based on the life of Bollywood's biggest (fictional) star, Anamika Anand, who vanishes without a trace. The show is produced by Karan Johar's Dharmatic Productions and also stars Sanjay Kapoor, Manav Kaul, Rajshri Deshpande, Muskkaan Jaferi, Lakshvir Singh Saran, Gagan Arora, Suhasini Muley, and Shubhangi Latkar. The series, which was previously called Finding Anamika, is set to premiere on Netflix on February 25 and subscribers will be able to watch all the episodes on the release date.

The trailer for The Fame Game begins with shots of Anamika Anand (Madhuri Dixit) on the red carpet. “I feel very blessed. I'm just a mom, a wife, and a daughter. I have a simple family, touchwood. Don't want to catch the evil eye,” she says, as she explains what it is like being a famous actor. The video takes a swift twist, showing an empty room, as Anand's daughter's voice is heard asking: “Do you know where my mom is?” And the search for the missing actor begins.

Forty-eight hours after the actor went missing, the police dig deep into Anand's family life, from her relationship with her husband (Sanjay Kapoor). "I was a middle-class boy from Nagpur, who got a chance to marry his dream girl. How do you think our relations were?” he says. “We weren't just co-stars, we were much more than that,” he adds in response to the police officer's question about whether the actor shared everything with him. Not convinced, the officer says there's one reality in front of the camera and another behind it.

The Fame Game's trailer also shows different shots of the actor's life, including a dance sequence from a movie, paparazzi shots at a public venue, and her walking while crying. “Everyone things Anamika Anand's life is perfect. That's not true,” Dixit's co-star Manav Kaul says. Sometimes, your own family are the ones who cannot be trusted,” Anand's daughter says, as the search for the actor continues.

Set in the world of a glamourous Bollywood celebrity, The Fame Game follows the story of actor Anamika Anand (Madhuri Dixit) who disappears into thin air, without a word to family and friends. But everything is not as it appears, and Anamika's close ones will soon discover the dark side to her fortune and fame. The series was previously titled Finding Anamika, but Netflix recently announced that it would be called The Fame Game.

Here's the official synopsis for The Fame Game (previously Finding Anamika) from Netflix:

When India's most famous actress goes missing, the search for her chips away at the flawless facade of her life and family, revealing painful truths.

The Fame Game premieres Friday, February 25 on Netflix. In India, The Fame Game will be available in English and Hindi. The show's episodes are directed by Karishma Kohli and Bejoy Nambiar, while Sri Rao (Baar Baar Dekho) has written the series.