Alongside Badhaai Do, Gangubai Kathiawadi, Rocket Boys, and The Fame Game. 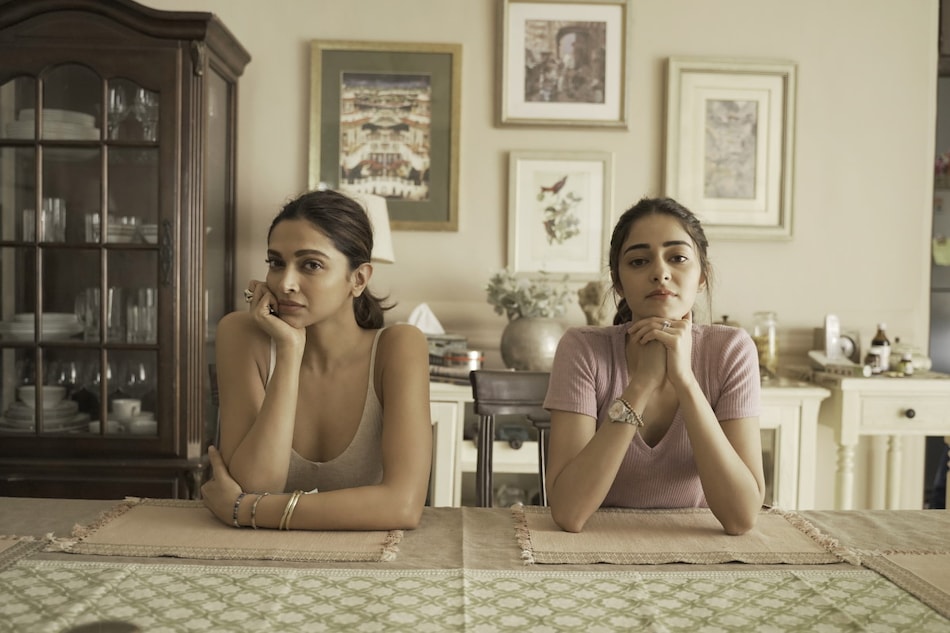 After a dullish January, February is heating up on both OTT and in cinemas. Gehraiyaan — the romantic drama led by Deepika Padukone, Siddhant Chaturvedi, and Ananya Panday — sweeps onto the shores of Amazon Prime Video February 11. On the same day, Rajkummar Rao and Bhumi Pednekar-starrer LGBTQ+ comedy Badhaai Do reaches cinemas across India. A week prior to that, we have three more OTT releases. Taapsee Pannu and Tahir Raj Bhasin lead the thriller Looop Lapeta out February 4 on Netflix. Over on SonyLIV, Rocket Boys gives us the story and rivalry of Dr. Vikram Sarabhai (Ishwak Singh) and Dr. Homi J. Bhabha (Jim Sarbh). And Disney+ Hotstar presents The Great Indian Murder — led by Pratik Gandhi and Richa Chadha as two detectives.

We're not done. Internationally, Tom Holland and Mark Wahlberg jump into the world of the acclaimed PlayStation video game franchise Uncharted. The Uncharted movie drops February 18 in Indian cinemas in English, Hindi, Tamil, and Telugu. Holland's Spider-Man: No Way Home makes its way to our homes — available for digital purchase or rent via video-on-demand — February 28 in the US; there's no India date as yet though. In the world of streaming, The Marvelous Mrs. Maisel returns with its fourth season February 18 on Prime Video. The same day on Mubi, the excellent French movie Petite Maman releases for Indian audiences. And a week later on February 25, the world of Vikings expands with Vikings: Valhalla on Netflix.

There's a lot more in February 2022 that isn't detailed below. If you're looking for new series, Murderville has Annie Murphy, Conan O'Brien, Kumail Nanjiani, and Sharon Stone playing detective partners to Will Arnett — except they weren't given a script. It's all improv. Murderville is out February 3 on Netflix. Amazon is rebooting Jack Reacher for TV with a guy who's a better match for the character's height in the books. Reacher premieres February 4 on Prime Video. Uma Thurman leads the thriller Suspicion, starting February 4 on Apple TV+.

Shonda Rhimes delivers her first Netflix series February 11 with Inventing Anna, the true story of a fake woman. Apple TV+ also has the Adam Scott-led thriller Severance on February 18, where work-life balance is achieved in a sci-fi fashion. Fans of animation and the Cuphead game should seek out The Cuphead Show!, also out February 18 but over on Netflix. And that leaves Super Pumped: The Battle for Uber, where Joseph Gordon-Levitt plays the highly-controversial former Uber co-founder and CEO Travis Kalanick. Super Pumped begins February 28 on Voot Select.

If it's returning series you're after, the Steve Carell-led Space Force is back for season 2 February 18 on Netflix. The superhero series Raising Dion is also back for its second season February 1 on Netflix. And the ‘80s Los Angeles crack epidemic drama Snowfall returns for its fifth season, beginning February 24 on Disney+ Hotstar.

For those who want more movies, Jennifer Lopez and Owen Wilson lead the rom-com Marry Me — timed for Valentine's Day — releasing February 11 in cinemas. Marry Me is also streaming the same day, but only on Peacock in the US. (Yes, Peacock is a streaming service. No, I'm not making it up.) On the same day February 11, Prime Video has its own rom-com in I Want You Back, led by Charlie Day and Jenny Slate.

With that, here's our February 2022 guide to Netflix, Disney+ Hotstar, Amazon Prime Video, SonyLIV, Mubi, and the cinemas.

After the playboy son (Jatin Goswami) of an influential politician is murdered at the party he's throwing to celebrate his acquittal in a murder case, his enraged father (Ashutosh Rana) calls for a CBI enquiry that pulls in detectives Suraj Yadav (Pratik Gandhi) and Sudha Bharadwaj (Richa Chadha). They dig deep into six main suspects, who were either invited or not invited to the aforementioned party.

The Great Indian Murder is based on the 2016 novel Six Suspects, penned by the retired Indian Foreign Service officer Vikas Swarup, best known for the book that was made into the Oscar-winning Slumdog Millionaire. Swarup based Vicky's character on Manu Sharma, the murderer of Jessica Lal. Tigmanshu Dhulia directs all episodes, Ajay Devgn is among the producers.

All episodes of The Great Indian Murder will release at once on Hulu and Disney+ Hotstar.

Watch the Trailer for The Great Indian Murder

When: February 4
Where: Netflix

When: February 4
Where: SonyLIV

Centred on the respective fathers of India's space and nuclear programmes, Dr. Vikram Sarabhai (Ishwak Singh) and Dr. Homi J. Bhabha (Jim Sarbh), this biopic drama charts their personal and professional lives, and how they clashed on the use of atomic energy, especially in the wake of the 1962 Sino-India War. The Rocket Boys trailer hints at the inclusion of a young A. P. J. Abdul Kalam (Arjun Radhakrishnan), who served as President of India in the 2000s.

All Rocket Boys episodes will release at once on SonyLIV.

When: February 11
Where: Cinemas

Rajkumar Rao and Bhumi Pednekar lead this spiritual sequel to the National Award-winner Badhaai Ho in which gay cop Shardul Thakur (Rao) and lesbian PT teacher Suman Singh (Pednekar) opt for a lavender marriage to smooth things with their families who are pressuring them to get married. Naturally, it only leads to more mayhem.

When: February 11
Where: Amazon Prime Video

Unhappy with Karan and the course her life has taken, and possibly jealous of Tia's professional success, Alisha starts hooking up with Zain. Why is he doing it? The Gehraiyaan trailer doesn't hint at it hard enough, except to reveal that Zain bonds with Alisha over their trouble pasts. And he wants to be his own man, having gone up the corporate ladder much quicker after he started seeing Tia.

When: February 18
Where: Amazon Prime Video

Over two years after it was last on air — 26 months and 12 days, to be precise — Amazon's Emmy-winning comedy-drama returns for its fourth season. The clock has moved on a year inside the show too, bringing with it a new decade: 1960. Midge (Rachel Brosnahan) is adamant that she will take back what was hers, having been thrown out of her last tour, and lands a gig that gives her total creative freedom.

But that commitment to her craft naturally sends ripples across her family and friends, all of whom are dealing with major changes. Her parents Abe (Tony Shalhoub) and Rose (Marin Hinkle) now live with her in a fancy Upper West Side (New York) house she bought, after the financial worries of season 3. (Abe is now a theatre critic.) Meanwhile, Susie (Alex Borstein) harbours big plans for her new agency.

Kayli Carter has a recurring role on The Marvelous Mrs. Maisel season 4, while Kelly Bishop, Milo Ventimiglia, Reid Scott, Jason Ralph, John Waters, and Jason Alexander have guest roles. Amazon is switching up the release format too to a weekly rollout, having had success with The Boys. Two episodes will premiere each Friday, for four weeks.

When: February 18
Where: Mubi

Struggling with the death of her maternal grandmother, eight-year-old Nelly (Joséphine Sanz) moves into her mother's childhood home until they clear it of the grandmother's belongings, and makes a new friend (Gabrielle Sanz) of her age who has a lot in common with Nelly's mother (Nina Meurisse). That kickstarts a (lo-fi) sci-fi fantasy journey, one where the past and future are interlinked.

Céline Sciamma (Portrait of a Lady on Fire) writes and directs what was one of my favourite films from last year. Petite Maman available now on streaming in India (via Mubi) following a premiere at the 2021 Berlin International Film Festival, and theatrical release internationally.

When: February 18
Where: Cinemas

From comics to games. Spider-Man star Tom Holland is stepping into the boots of young fortune hunter Nathan Drake in this long-in-the-works adaptation of the PlayStation video game series of the same name. It was stuck in development hell for so long that co-star Mark Wahlberg has aged out of the role — and is now playing Drake's mentor and father-figure Sully.

Sophia Ali plays fellow fortune hunter and Drake's love interest Chloe Frazer, who was the protagonist of the India-set spin-off game Uncharted: The Lost Legacy. This also means should Uncharted turn out to be a successful series for Sony Pictures, we might be in for a spin-off movie at some point. Antonio Banderas plays the villain.

When: February 25
Where: Netflix

Madhuri Dixit Nene stars in this suspenseful family drama about a global superstar, wife, and mom who vanishes without a trace. As police and loved ones search for answers to her disappearance, her perfectly crafted facade is stripped away, revealing hidden truths and painful lies in the life of an iconic actress.

All episodes of The Fame Game will release at once on Netflix.

When: February 25
Where: Cinemas

The latest film from Sanjay Leela Bhansali is his first since 2013 to not be set prior to the 19th century. Though even this one is set in the 1960s, it does still mean a different century. Oh well. In it, Alia Bhatt plays the titular young girl who rose from her humble Kathiawad origins — that's in Gujarat — to become a brothel madame and mafia don in Bombay's red-light district Kamathipura after she was sold into prostitution.

Delayed several times due to the ongoing COVID-19 pandemic, Gangubai Kathiawadi now set for a late February release in cinemas. Premieres at Berlinale Special Gala as part of the 2022 Berlin International Film Festival.

When: February 25
Where: Netflix

Having seen much success with Canadian channel History's original series, Netflix has decided to dive back into the world of Vikings with this sequel that is set a century after the events of Vikings' sixth and final season. It will follow the English, Danish, and Norwegian queen Emma of Normandy (Laura Berlin), Norse explorer Leif Eriksson (Sam Corlett), his sister Freydís Eiríksdóttir (Frida Gustavsson), and Norway king Harald Sigurdsson (Leo Suter).

Directors on Vikings: Valhalla include BAFTA-winning Danish director Niels Arden Oplev (2009's The Girl with the Dragon Tattoo), Vikings veteran Steve Saint Leger, and Hannah Quinn (Fate: The Winx Saga). Netflix is locked in for a 24-episode commitment, which should guarantee at least a two-season run.

All episodes of Vikings: Valhalla season 1 to drop together on Netflix.

I Want You Back