Chris Hemsworth’s fourth own Thor movie is yet to release in the US. 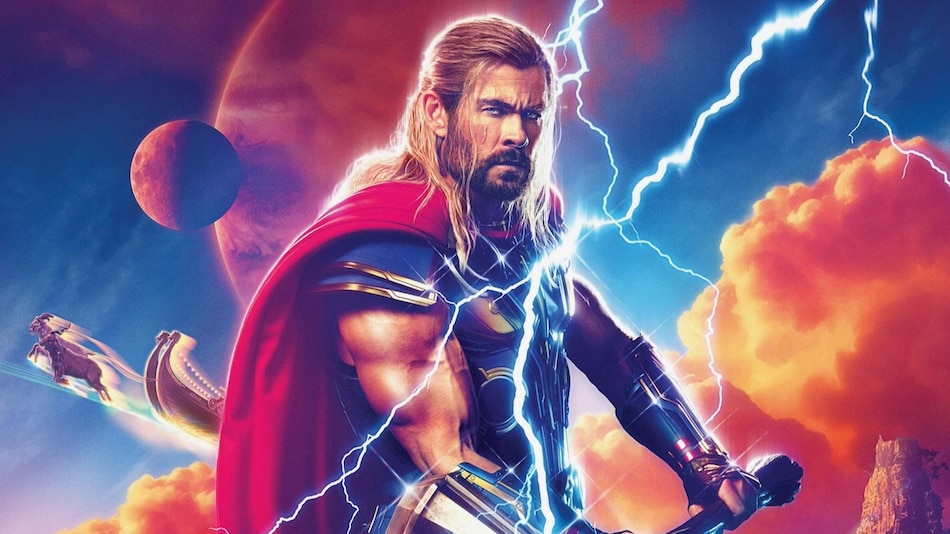 Chris Hemsworth as Thor in Thor: Love and Thunder poster

Thor: Love and Thunder — the new Marvel movie out now in cinemas — has leaked onto torrent sites and other networks that enable piracy, in differing versions of quality and file size (from 847MB to 2.63GB). While most copies are arguably genuine, given the attached screenshots and user comments attesting to their legitimacy, some are fraudulent and merely exist as a trap to load viruses, malware, and whatnot onto the computers of unsuspecting individuals. Surprisingly, the illegal Thor: Love and Thunder copies are better than we have seen in the past, though they are filled with advertisements. Gadgets 360 does not condone illegal file-sharing. It is against the law and filmmakers deserve to be paid for the content they create.

All You Need to Know About Thor: Love and Thunder

The first legitimate leaked version of Thor: Love and Thunder showed up on torrent sites around 11am IST on Thursday, July 7, with the label “CAM” suggesting it was filmed with a video camera in cinemas. The fourth Thor movie released Wednesday in Australia, Germany, Indonesia, Italy, and South Korea, and Thursday in India, Brazil, Ireland, Mexico, the UAE, and the UK. Thor: Love and Thunder is due to release Friday in Canada, Japan, Spain, the US, and elsewhere. According to comments and screenshots, the illegal Thor: Love and Thunder rips feature intermittent ad breaks. Additionally, there are multiple ad watermarks — one persistent — for an online gambling and betting website. Both have been inserted digitally onto the leaked recording.

Thankfully for Disney, Marvel Studios, and the Thor: Love and Thunder cast and crew, while the quality of the cam-recorded illegal Love and Thunder rips isn't downright terrible — per publicly available screenshots — there are still severe issues with sharpness, detail, contrast, cropping, angle, and/or colour. We won't be posting any screenshots out of not wanting to spoil any part of the film. Gadgets 360 has not been able to verify audio quality, though user comments suggest that it's echo-y, muffled, and hard to hear. The Thor: Love and Thunder full movie leaks only reinforce the fact that you should check out the movie in theatres.

Directed by Taika Waititi (Thor: Ragnarok), off a screenplay he co-wrote with Jennifer Kaytin Robinson, Thor: Love and Thunder stars Chris Hemsworth as Thor now in a mid-life crisis, Christian Bale as the new villain Gorr the God Butcher who wields the Necrosword, Tessa Thompson as New Asgard king Valkyrie who's bored with the bureaucratic part of the job, Jaimie Alexander as Asgardian warrior and Thor's childhood friend Sif, Waititi as Kronan gladiator and Thor's friend Korg, Russell Crowe as Zeus, king of the Olympians, and Natalie Portman as Thor's astrophysicist ex-girlfriend Dr. Jane Foster/ Mighty Thor who is undergoing cancer treatment.

The Guardians of the Galaxy are featured on Thor: Love and Thunder, as the new Marvel Cinematic Universe movie picks up where Avengers: Endgame left off. That includes Chris Pratt as Peter Quill/ Star-Lord, Pom Klementieff as Mantis, Dave Bautista as Drax, Karen Gillan as Nebula, Sean Gunn as Kraglin Obfonteri, and Vin Diesel and Bradley Cooper as the voice of Groot and Rocket respectively. Matt Damon, Sam Neill, and Luke Hemsworth return from Thor: Ragnarok as Asgardian actors playing Loki, Odin, and Thor respectively, with Melissa McCarthy joining them as a fellow Asgardian actor who plays Hela. Kat Dennings and Stellan Skarsgård return as Foster's colleagues Darcy Lewis and Erik Selvig.

Thor: Love and Thunder is now playing in cinemas in India in English, Hindi, Tamil, Telugu, Malayalam, and Kannada.