Leila Review: Netflix’s Indian Series Does What Dystopian Fiction Should

It’s not without its faults, but it’s necessary TV. 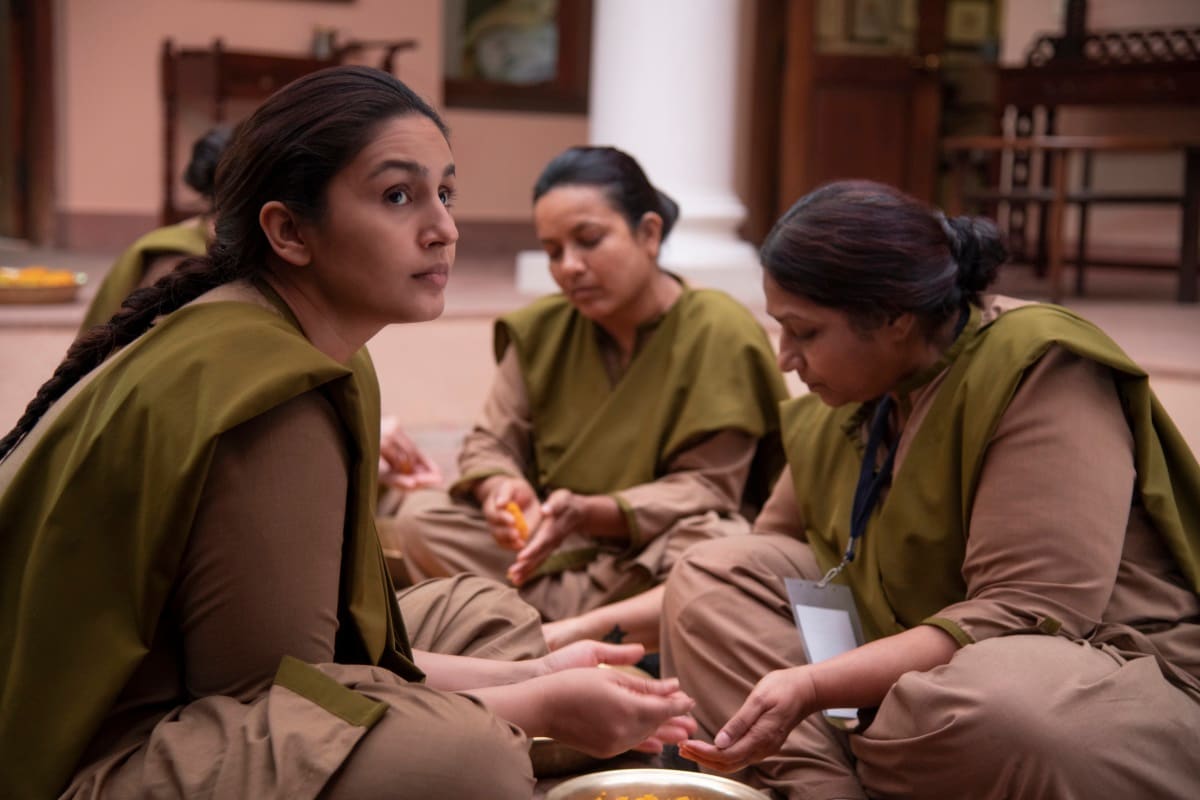 The best dystopian future stories have always merely held a mirror to the society of today. Unfortunately, India has had a severe lack of them on screen in recent years. This is probably because dystopia is simply the lived reality for many in the country. Indian women's safety records continue to be among the worst in the world, and the country's abysmal ranking in the press freedom index speaks for itself.

And thanks to a moralistic scissor-happy censor board and a fear of offending people, India's filmmaking industry has largely opted for an economically-safer approach, serving the masses what they readily accept: pop patriotism. Amidst that environment, Netflix's newest original series from India — Leila — based on journalist-turned-author Prayaag Akbar's dystopian 2017 novel of the same name, and directed in part by Deepa Mehta (Elements trilogy), is a bolt from the blue. A rather necessary one.

Unlike the dystopian societies usually portrayed in stories from the West, from “1984” to Children of Men, there isn't a totalitarian regime and an effective police state in Leila. Instead, it's a more insidious and a starker version of India, where the necessary democratic freedoms don't exist for those that violate accepted new norms.

Set in the late 2040s, Leila takes place in Aryavarta — Sanskrit for the abode of the noble ones — where society has been divided along the tenet of “purity”, led by a Mr. Joshi (Sanjay Suri, from Jhankaar Beats). It's essentially a backhanded justification for segregation, with each community now living in its own sector that is physically barricaded by walls. Inter-community marriages are effectively prohibited, and those that disobey bear the brunt of the powers that-be.

Most of this is essentially an extension of the obstacles faced by many Indians today. In fact, that's what influenced Akbar to write “Leila” in the first place, after seeing the decline of civility around him and being discriminated against. And while the book largely offers commentary on class, caste, gender, and privilege, the Netflix series — adapted by Urmi Juvekar (Oye Lucky! Lucky Oye!), Suhani Kanwar (Lipstick Under My Burkha), and Patrick Graham (Ghoul) — also touches upon authoritarianism and the worship of political leaders through the Aryavarta concept, alongside communal hatred.

Leila opens in 2047 in a fictionalised city that seems to be modelled on Delhi, and introduces us to Shalini Pathak (Huma Qureshi, from Badlapur), her husband Rizwan Chowdhury (Rahul Khanna, from Bollywood/Hollywood), and their daughter Leila (Leysha Mange), who are relaxing by the pool in their upscale house. But their domestic bliss is cut short after some goons break in, kidnapping Shalini and dropping her off at an Aryavarta indoctrination centre for women. She's still there two years later, going through the daily routine of taking mind-altering pills and chanting “My lineage is my destiny”. It's all allegedly preparation for a “purity test”, with those who pass it deemed fit to return home. Or so claims the centre chief Dr. Iyer (Arif Zakaria, from Nanak Shah Fakir), referred to as Guru Ma by the women.

Shalini longs to be reunited with her daughter, which explains the immediate shift in her behaviour in the opening minutes of Leila, from her fearless confrontational attitude to a subdued one that is accepting of her new fate. There are easy comparisons to be made to The Handmaid's Tale, given the basic character motivation, and Aryavarta's subjugation of women, who are told how to behave and the purpose they have in the new society. At Shalini's indoctrination centre, a background poster reads “an ideal woman is one who is a domestic goddess and serves the household”. Leila is also similar to The Handmaid's Tale in how the women are colour-coded, with the new ones like Shalini wearing red, those part of the slave-like workforce dressed in a drab green, and the upper-class wives donning blue.

You could continue the parallels in an environmental sense, considering both shows are set in a world where rampant pollution has led to climate disaster. But where the Colonies are shown to be away from Gilead in The Handmaid's Tale, the clean new world and the toxic old one exist side-by-side on Leila, just like the condominiums and the slums do in India's metropolitan cities today. Owing to that, there's a lot more disorganisation and lawlessness in Aryavarta, with those living on the fringe freer in some ways than those enjoying a better life within the high walls. A telling detail is a Mahatma Gandhi poster that a small-time shopkeeper and slum dweller has in his store, which he immediately flips to a Mr. Joshi poster when an Aryavarta goon (Siddharth, from Rang De Basanti) enters.

It also signals that hard-won freedoms can disappear, if we are not too careful. That's exactly what happens in Aryavarta, where dissenters are silenced or thrown to the dogs. And the divide between the haves and have-nots is further exacerbated with the help of technology, which Aryavarta uses extensively to further restrict access to marginalised sections and monitor its citizens. For instance, clean water is naturally a precious resource in a heavily-polluted world, and the drinking variety is only available out in the open world at water ATMs, accessible to those with an Aryavarta chip in their arms. Through it, Leila also expands on the discrimination and harassment of the so-called “untouchables” in India.

The whole Aryavarta business is original to the show, with the book relying on an entity known as The Council instead. For Leila, it acts as the gateway for its commentary on authoritarianism. While everyone greets each other with “Purity for all” in Akbar's novel, that phrase turns into “Jai Aryavarta” on the Netflix show. But that's not the only change Leila makes, with the much bigger one being the time gap. When we first meet Shalini in the book, it's been 16 years since her separation from Leila. Reducing it to just two years is a curious choice indeed. On the show, it naturally feels more immediate but also cut shorts the pain and longing that would be felt by Shalini. In the book, she is essentially living in denial that she might still see her daughter, but the show strikes a more hopeful tone.

While that doesn't affect the narrative development, at least not yet, Leila suffers from a few pacing problems in the first half of the season that the crisis had access. We are initially led to believe that Shalini has given into the new way of life at the indoctrination centre after being there for two years, but it turns out that she still has a bit of a revolutionary streak in herself later in the same episode. There's too short a gap between her introduction and that sudden change, catalysed by the arrival of a new woman in their ranks. And the second episode spends half its runtime in circles, as Shalini tries to evade capture. It does link her with a young girl around Leila's age who helps her, but she's then abandoned at the end of that same episode.

That is most likely a deliberate choice on part of Leila, as each episode — which pushes the story forward and includes vignettes of Shalini's old life in parallel — almost feels like a new chapter in her life. Qureshi is the sole primary constant for the Netflix series, with supporting roles for Khanna and Siddharth, and recurring guest-level roles for the rest. Naturally then, Leila rides on Qureshi's shoulders, what with the camera resting on her face for long stretches, as she is asked to deliver variations on long, blank stares that convey a mix of fear, resolve, acceptance, and hopelessness. That Qureshi largely excels in that regard is what powers Leila, but the show will need more than one strong performance — just look at the terrific women ensemble of The Handmaid's Tale — for the long run.

Even with its shortcomings, Leila is a much-needed series that does exactly what dystopian future fiction should — hold up a mirror to society — and in turn, lays bare our worst impulses. Its best moments are the quiet, little ones, be it the brainwash of children as depicted in one episode, the demeaning treatment across socio-economic classes, or the showcase of power dynamics that hits deeper at ingrained misogyny in India. And just like The Handmaid's Tale, Leila shows us how unchecked tyranny, oppression, and violation of basic norms is a ripe and dangerous slippery slope. It asks us to question our daily behaviour and the values espoused by those around us. Lest we face the same fate as Shalini.

Leila is out Friday, June 14 on Netflix worldwide.