The Mandalorian Season 2 Episode 1 Recap: Belly of the Beast

Spoilers ahead for The Mandalorian Chapter 9: The Marshal. 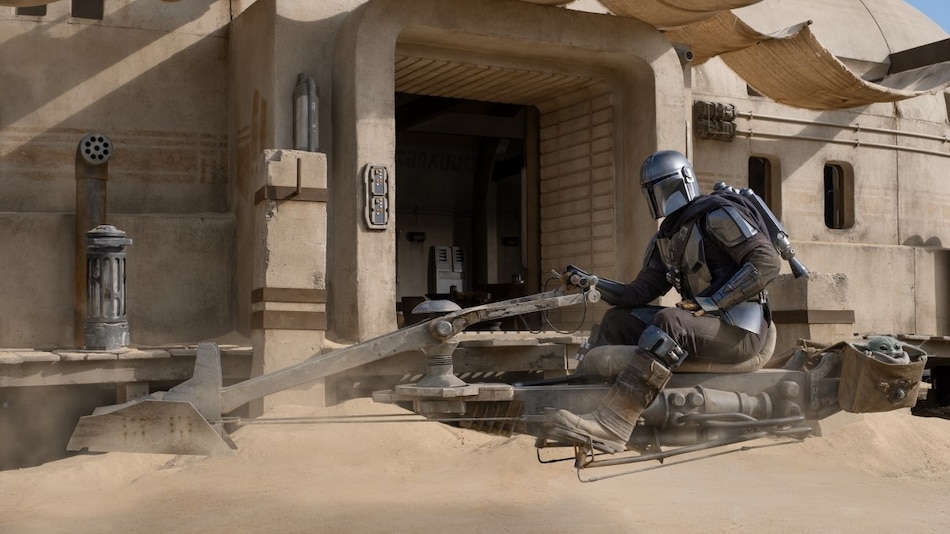 The Mandalorian season 2 delivered a first episode — titled Chapter 9: The Marshal — that honoured all of its roots, as a Western, fantasy, and sci-fi series. Baby Yoda was a spectator at the end of it, but boy, was that a thrilling opening. It was among its most epic, partly thanks to an eight-minute sequence that seemed to have been shot with IMAX cameras (it filled the screen with a 16:9 aspect ratio, as opposed to the usual widescreen). And running at 52 minutes, it was also the longest one yet. That runtime allowed writer-director Jon Favreau — his first as director since he was busy with The Lion King during production on season 1 — to take his time with scenes, which made it all the more immersive.

Chapter 9: The Marshal began at night in the back streets of a dimly-lit town. Din Djarin/ the Mandalorian (Pedro Pascal) and his ward Baby Yoda/ the Child — “Wherever I go, he goes,” Mando said when questioned on bringing a child to such areas — had come to see a certain one-eyed alien called Gore Keresh (voiced by John Leguizamo) at an illegal ring fight. The Mando needs information on other Mandalorians, to help him reunite Baby Yoda with his kind, and he had heard that Gore Keresh could provide that. Except the alien had other plans. After Mando refused to bet his beskar armour for the ongoing brawl inside the rung, Keresh shot the opponent he was betting against and then pointed his gun at Mando, along with three of his cronies.

As we've learnt in The Mandalorian season 1, our protagonist doesn't like when people point things at him. And moreover, he enjoys these kinds of odds. The Mando activated “whistling birds” — tiny rockets on his arm — and Baby Yoda took that as a sign to shut his floating shell and secure himself. What followed was entirely predictable, as Mando made short work of Gore Keresh's paid henchmen. Keresh tried to flee to safety in the ensuing chaos but the Mando caught up with him outside and hung him upside down on a street light, a shot that brought The Dark Knight to mind. With his life on the line, Keresh volunteered that he had heard of another Mandalorian on Tatooine, a planet well known to Star Wars fans. Mando then left Keresh to die at the claws of nocturnal creatures.

Everything You Need to Know About The Mandalorian Season 2

The Mando, and Gore Keresh in The Mandalorian season 2 episode 1
Photo Credit: Disney/Lucasfilm

A return to Tatooine meant a reunion with the mechanic Peli Motto (Amy Sedaris), first introduced in The Mandalorian season 1 episode 5 “Chapter 5: The Gunslinger”. Motto is very pleased to learn that Baby Yoda is alive and well, and surprised to see that Mando is now okay with her droids touching his ship. (Thank you, IG-11). Mando takes Motto's help in finding out the Tatooine city Gore Keresh spoke about, a certain Mos Pelgo, which is not seen on any modern maps. Motto says that's because it was wiped out during the war, and it's a simple mining settlement now.

The shots of Mando arriving in Mos Pelgo are right out of the Western playbook, with strangers regarding a new arrival — one who sports shiny beskar armour — with caution. Mando steps off his speeder bike and steps into an empty cantina (it's the middle of the day after all) and asks the barkeep where he can find “a man who looks like me”. You must mean the Marshal, the barkeep says, giving meaning to the title. Pan to a guy sporting pieces of the Boba Fett armour at the door, who strides towards Mando and order two shots of a blue-coloured drink. He sits at a nearby table and promptly takes off his helmet (it's Timothy Olyphant!) an act that is forbidden in the Mandalorian creed. It proves that the Marshal is no Mandalorian, which he says as much in a second.

For Mando, a random guy wearing another Mandalorian's armour is sacrosanct, and he immediately demands that the Marshal take it off and hand it over. Their stand-off is interrupted by an earthquake of sorts, which is revealed to be a giant krayt dragon that has been terrorising the town of Mos Pelgo. The Marshal makes Mando an offer: help him slay the dragon and the armour is yours. The Mando accepts and the two set off on their speeders towards the dragon's lair. Along the way, the Marshal reveals his backstory: he's Cobb Vanth, a lifelong resident of Tatooine who survived an attack from the Mining Collective on Mos Pelgo after the destruction of Death Star II left a power vacuum. He escaped unknowingly with a box of crystals, which he traded to his Jawa rescuers in exchange for his freedom and remnants of the Boba Fett armour they had salvaged.

Along the way to the dragon's cave, they encounter the Sand People and their komodo dragon-type beasts. The Mando reveals that he speaks Tusken which helps them form an alliance to take down the krayt dragon together. But they will need more help to take on the mammoth beast that lives underground. Mando volunteers Cobb Vanth's townsfolk, except it's not that straightforward. The Sand People and the Mos Pelgo citizens don't see eye to eye, due to skirmishes between the two. Mando and Cobb Vanth make a joint appeal, reminding them that the krayt dragon can swallow whole Mos Pelgo one day if it likes. That gets them on board and together, they put a plan in motion: wake up the dragon, grab onto it with giant spikes to hold him in place, and then blow a series of charges that have been covertly buried in the sand.

Of course, as with any on-screen plan, it doesn't go well. The krayt dragon senses it's being lured out and tries to slip back into his cave. (This is where The Mandalorian season 2 episode 1 switches its aspect ratio, with the screen slowly expanding as the dragon emerges from its cave. You can visibly feel the sharper clarity and the increased depth of field thanks to IMAX cameras. It all adds to the epicness of the battle.) The joint forces pelt him with blasters and explosives to enrage it. That works but it also works against them, after the krayt dragon reveals a previously unseen capability: an acid bile that it spouts. To add to their misery, the first series of explosives barely make a dent in the beast's thick skin.

Now even angrier, the krayt dragon turns the tables on its puny opponents, as it burrows underground and emerges from unexpected places. First, the top of a nearby mountain, and then from the sand dunes behind the attacking front. Mando hatches a plan on the spot with the remaining explosives that are tied to a bantha — that's the dual-tusked beast ridden by the Sand People — as Cobb Vanth gets the dragon's attention. As it approaches the helmeted duo, Mando pushes Vanth out of the way and is swallowed whole by the dragon.

A quiet falls on the battlefield for half a minute but then the krayt dragon again emerges from underground, and a flying Mando emerges alongside, having electrified and shocked the inside of the beast's mouth with his weapons to open it. Mando then hits the trigger and the bantha with the explosives, now deep in the dragon's belly, rip it apart. It's yet another showcase for not just the Mando's capabilities, but more importantly, his willingness to go the extra mile and potentially sacrifice himself in the process. Right before he's swallowed whole, he tells Cobb Vanth to take care of the child. Mando and Baby Yoda, name a better pair :')

With the krayt dragon dealt with and Boba Fett's armour back where it belongs, Mando bids Cobb Vanth goodbye and heads back to his spaceship that he left with the mechanic Peli Motto. And as it closes, The Mandalorian season 2 episode 1 leaves us with a tease for episode 2. A bald man with two weapons slung across his back watches Mando on his speeder from afar. He turns and reveals himself to be Temuera Morrison, who played Boba Fett's father Jango Fett in the Star Wars prequel trilogy and was rumoured to play Boba Fett in The Mandalorian season 2.

It's obvious that he is actually the other Mandalorian our hero has been looking for. The dragon was just a detour, but what a detour it was. And when the Mando does encounter Morrison's character, I'm sure he'll be pleased to have his armour back. If he is indeed Boba Fett. We might find that out next week.

The Mandalorian season 2 episode 1 “Chapter 9: The Marshal” is now streaming on Disney+ and Disney+ Hotstar wherever available. New episodes will release around 1:30pm IST from next week, due to daylight savings changes in the US.