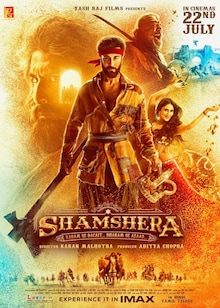 Shamshera is a period drama film set in the pre-Independence era of the 1800s. It chronicles the story of a dacoit tribe fighting against the British for their rights and independence. The film is believed to be the Indian adaptation of Howard Pyle’s “Merry Adventures of Robin Hood” with a few creative liberties in line.