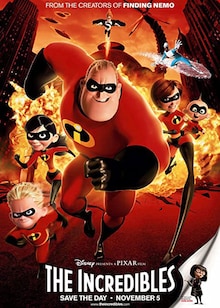 About The Incredibles Movie (2004)

Both have their unique superpowers, Mr. Incredible has super strength while Elastigirl has super stretchability to reach places nobody else could.

Bob gets contacted for a job on a mysterious island, where he has to fight an out-of-control robot.

Rating 90
Rate this Movie
Your Rating