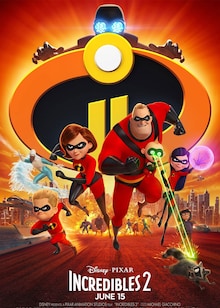 Helen Parr (Holly Hunter) a.k.a known as Elastigirl is in the spotlight, as her telecommunications guru Winston Deavor wants her to fight crime and make the public fall in love with superheroes once again.

Mr. Incredible a.k.a Bob (Craig T. Nelson) is at home and facing his greatest challenges ever, taking care of three rambunctious children, Violet (Sarah Vowell), Dash (Huck Milner) and Jack-Jack (Eli Fucile), and managing the home. The family is unaware of baby Jack-Jack’s emerging superpowers which makes him turn into a monster.

A powerful cybercriminal, Screenslaver (Catherine Keener) starts to create trouble by hypnotizing the world through computer screens and builds a dangerous plot. The family and Frozone (Samuel L. Jackson) join hands and work together again to save the world.

Rating 80
Rate this Movie
Your Rating

It's been a while since we first met the Parr family of five in The Incredibles. Fourteen years, to be precise. The landscape of superheroes has been littered since, mainly thanks to the prolific nature of the Marvel machinery. But despite the boom in such stories, there isn't anything exactly like the Incredibles, a family that fights crime together. The closest thing to it would be the Guardians of the Galaxy, but even it can't match the unique dynamic. And that's why Incredibles 2, even after all this time, is still very much its own thing.