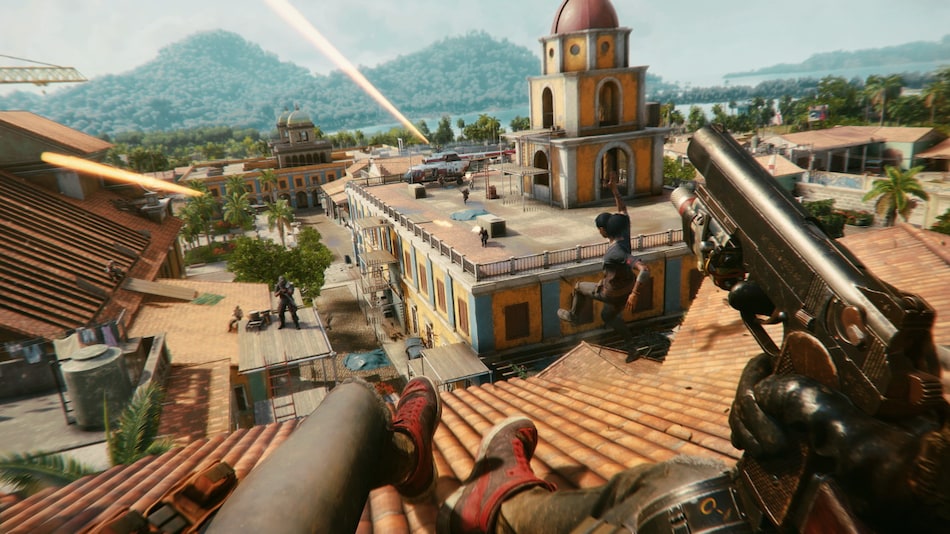 In Far Cry 6 — releasing October 7 worldwide — you play as local guerrilla Dani Rojas (Sean Rey/ Nisa Gunduz) who's trying to liberate their fictional Caribbean home island of Yara from the grip of dictator Antón Castillo (Giancarlo Esposito). Far Cry 6 developer Ubisoft Toronto built an entire (tiny) country, the biggest ever map for a Far Cry game. You will spend most of your time shooting your way through Yara, but Ubisoft Toronto also want you to slow down, take a breath, and explore the beauty of Yara. That's why it came up with a gun holstering system.

“You can put your weapons away and blend in, so as long as you're not doing anything antisocial, as long as you're not causing trouble fir the military, and you're not in any zones that the military consider to be protected or restricted, you can actually explore Yara,” Far Cry 6 world director Benjamin Hill told reporters last week. “It was something that was important to me and the team. We put so much care and effort into building this world into the characters that you meet, the stories, the music, the flora, the fauna, that we really wanted people to be able to stop and take a breath and experience that.”

Far Cry 6 Is All About Cuba, but Yara Is Not Cuba

You can stand on the beach and just watch the sun set, or you can take a walk through the city centre where you'll be able to eavesdrop on conversations. Far Cry 6 narrative producer Nicola Jones said: “We refer to them as encounters, these little glimpses of real life in Yara, to make it feel like a real country. Our audio and narrative teams were painstaking with the effort they put in. We wanted it to feel like people living their daily lives. Sometimes if you're in stealth mode and you're sneaking up on a soldier, you'll hear them complaining about like the rent, or like some tribulation that they are going through.”

The gun holstering system in Far Cry 6 even has a narrative justification, narrative director Navid Khavari said. It was influenced by the interactions the team at Ubisoft Toronto had with former guerrillas and their relatives.

“It is not all about saving their country. Some of them talked about how important it was to have that camaraderie, to find humour in the battle, just to deal with the stresses and intensity of what's going on,” Khavari said. “I remember one story, you know, they would be in the jungle playing music and guitars, and enjoying themselves hiding from the military. But then when they heard planes flying overhead, everyone would drop silent, put out the fire. Once the plane disappeared, they would start the party over. It's just these stories and ideas that we hadn't really seen in a narrative about revolution, and the opportunity to do that in Far Cry 6 was really exciting.”

Why Far Cry 6 Protagonist Dani Rojas Has a Face, a First for Far Cry

Why Far Cry 6 Player Character Dani Rojas Has a Face, a First for Far Cry
Bitcoin Price Sees a Hike After Days of Slump; Ethereum, Cardano Values Also Up