Battlegrounds Mobile India is at 46 million milestone and it won’t be long before it reaches the 48 million mark. 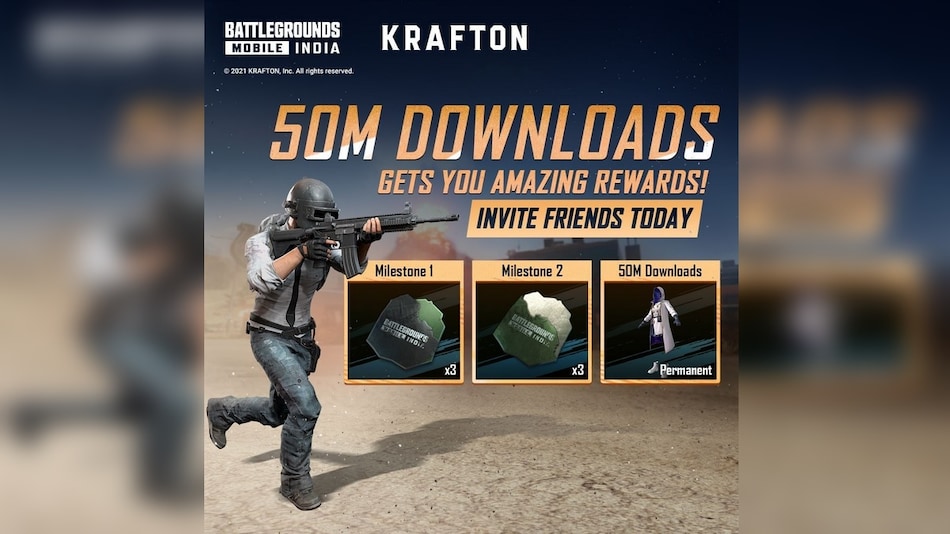 Battlegrounds Mobile India is nearing 50 million downloads and developer Krafton has announced a rewards event leading up to the milestone. The game, which is the Indian avatar of PUBG Mobile, was officially launched on July 2 but was available to a lot of players from mid-June. The downloads have been increasing steadily and now it is about to reach 50 million on Google Pay store as the game is only available to Android users for now.

The rewards will be available in-game in the events section. Once Battlegrounds Mobile India reaches these milestones, the rewards will be automatically unlocked. The 50 million downloads reward will be redeemable for one month. Interestingly, Krafton mentions that it is “preparing for all Indian players to receive rewards regardless of their OS”, which suggests that when the game releases on iOS, players will be able to claim these milestone rewards. Gadgets 360 has reached out to Krafton for confirmation.

An iOS release for Battlegrounds Mobile India is in the works, but when exactly that will happen is unclear. Though, the Instagram post shared by the developer has an Apple emoji suggesting the game will launch on iOS soon.

As of now, Battlegrounds Mobile India is at 46 million downloads. Considering the speed at which it is growing, it won't be long before it reaches the 48 million milestone.

What Is a Cryptocurrency Wallet? How Can You Set It Up?
Samsung Galaxy M32 5G Support Page Goes Live, Could Launch in India Soon