Garena Free Fire update on December 7 will get adjustments in the M4A1 assault rifle and P90 SMG. 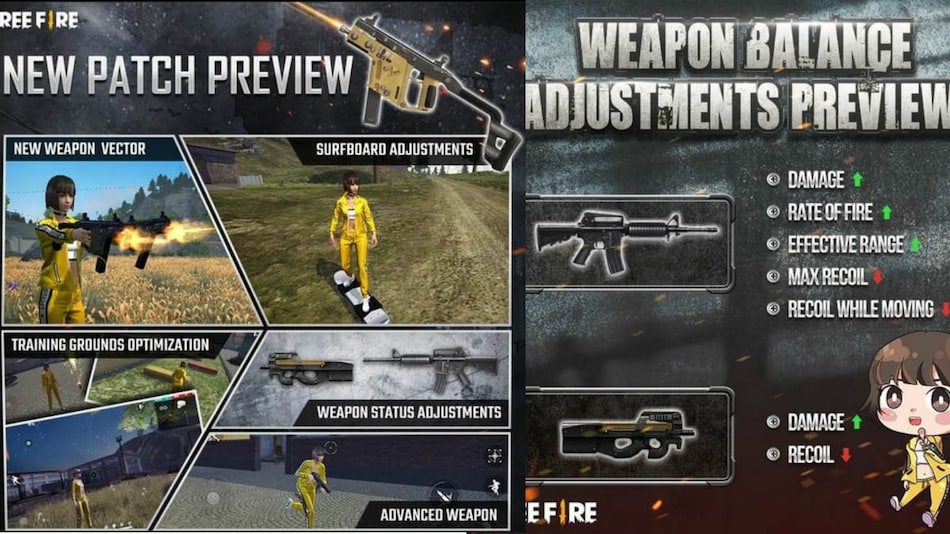 New weapon Vector Akimbo can be wielded in both hands

Garena Free Fire - the popular battle royale game for Android and iOS - will be receiving a major update on Monday, December 7, bringing changes to the training map as well as introducing some updated guns. The updated guns include the classic M4A1 assault rifle, and an updated P90 SMG. These two weapons will be adjusted for damage and recoil. The advanced weapons will also be replacing advanced attachments for more enjoyable looting. During the update, players can play the game like the way they usually play and they will be able to experience the new patch as soon as they update. The update heralds the launch of the Operation Chrono event, for which Garena has roped in footballer Cristiano Ronaldo. Players will play as Chrono, a character based on Ronaldo.

Developer Garena has announced on official Free Fire Instagram and Facebook Garena that the maintenance downtime for the update will begin on December 7 from 9.30am to 5.15pm (IST). “During this time, players will not be able to enter the game but you can continue playing as usual,” the developers said. Players will be able to experience new weapons and an optimised training map once they update the game.

Users will also be able to claim rewards when they update the game. Bermuda Shells will be introduced to obtain Fireworks, and Music Arcade as well as Dynamic Lighting will also be added in the game. Apart from this, the Garena Free Fire there is Operation Chrono event that is set to kick off after the update. Also new are surfboard adjustments, and weapon status adjustments.

Garena says Free Fire will get its first ever dual-wielding weapon - Vector Akimbo - that will allow users to cause damage to their opponents from both hands. As mentioned, a few weapons will be adjusted. The M4A1 assault rifle will do more damage and its rate of fire as well as range will be increased, as per a post. The P90 SMG will also be adjusted for extra damage, which will be balanced by reducing recoil. The advanced weapons will be replacing advanced attachments for an enjoyable looting.

As mentioned, the Operation Chrono event will let players play as Chrono, a character based on footballer Cristiano Ronaldo. The character is a source of inspiration for everyone around him. The Operation Chrono universe is set in a futuristic slum, a dystopian world featuring advanced technology. “It's a great feeling having not only a character in Free Fire modelled after me, but also having the whole universe within the game changing along with it. The Garena team has worked into the game tons of new features and elements for Operation Chrono,” said Cristiano Ronaldo. More details will be unveiled through the dedicated Chrono microsite.

You can download the updated game from the App Store and Google Play.

Redmi Note 8 or Realme 5s: Which is the best phone under Rs. 10,000 in India right now? We discussed this on Orbital, our weekly technology podcast, which you can subscribe to via Apple Podcasts or RSS, download the episode, or just hit the play button below.