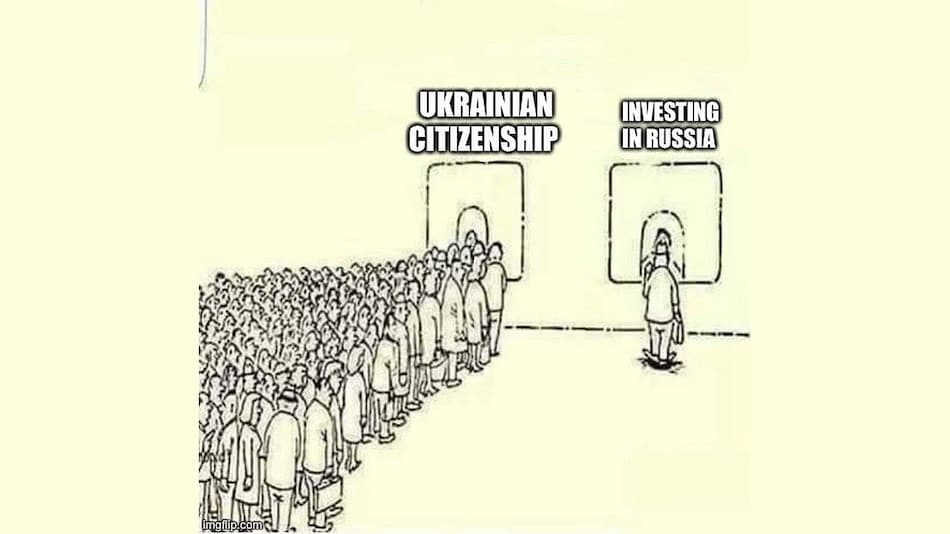 A giant Adolf Hitler bends down and pats a docile Vladimir Putin on the cheek, master to pupil, in a picture posted on Ukraine's official Twitter account on February 24 — the day the invasion began.

The message that follows reads: "This is not a 'meme', but our and your reality right now."

This is not a ‘meme', but our and your reality right now.

Almost two million people have liked the tweet and many thousands have shared it, making it one of the defining viral takes of the war so far.

Yet the country's official messaging is only a tiny part of the story of memes in the Ukraine war.

For two weeks after the invasion, Ukraine's official account pivoted away from humour, allowing the internet to fill the void.

Dozens of dedicated accounts sprang up and social media platforms have been flooded with content — from cats in cardboard tanks on TikTok to endless jokes about World War III and reworked scenes from Star Wars movies.

But beyond a few seconds of mirth, do memes have a wider role?

"I don't think memes are going to end the war," says Charlie Gere, a sociology professor from Lancaster University in the UK.

He describes memes in general as "nihilistic japing" likely to have minimal impact outside their own cultural sphere.

The war has given rise to one meme that has crossed from internet curiosity to real-world product.

The Saint Javelin meme — depicting a Madonna figure in the style of a religious icon clutching a rocket launcher — now features on T-shirts and various other merchandise sold by Canada-based marketer Christian Borys.

He says all his profit goes to the Ukrainian war effort and told the BBC he had raised more than $1 million (roughly Rs. 7.63 crore).

Memes are more commonly regarded as an effective way of spreading a message and engaging audiences.

Christian Dumais, a writer and comedian whose Twitter alter ego "Drunk Hulk" has been behind plenty of viral content over the years, says Ukraine has been incredibly clear in its use of memes.

"A meme's ability to re-contextualise what we're seeing in the world in order to subvert, inspire, provoke, and educate is redefining how we can reach people," he says.

Vincent Miller of Kent university in the UK, author of "Understanding Digital Culture", sees memes as a kind of conversation that can enable political debate to flourish.

"Given their anonymous nature and origins, memes allow people to avoid a lot of the friction and social divisiveness often involved with making political statements online," he told AFP.

Whether impactful or not, memes will continue to proliferate around the war.

Ukraine's official Twitter, after a two-week hiatus, returned to memes on the weekend, posting an image ridiculing Russian tanks and another highlighting the collapsing Russian economy.

"At the moment in my feed he is being idolised," says Gere, "turned into this figure of nobility and courage and real manliness as opposed to ersatz manliness".

One of the most popular memes has been casting Zelensky as a Marvel superhero.

His Russian counterpart Vladimir Putin has not fared so well, variously depicted cowering behind his massive marble table, begging China for help or just looking ridiculous in a variety of ways.

"I know we're not talking about revolutionary tactics here,” says Dumais, "but memes in this context are significantly better than adding the Ukrainian flag to your social media profile".

He points out that creating memes requires at least some engagement with the subject.

"They allow us to express our outrage and help remove the feeling of helplessness," he says.

Google Pixel 7 Screen Tipped to Be Smaller Than of Pixel 6, Pixel 7 Pro Said to Come With 120Hz LTPO Display