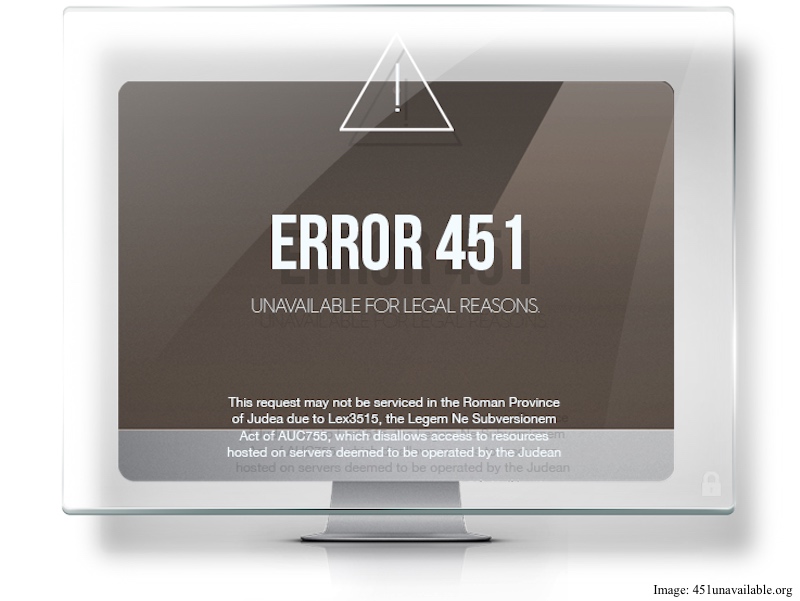 When you request a webpage that doesn't exist, the website throws a 404 error, making you aware about the unavailability of the resource. But it doesn't reveal the exact reason why a webpage isn't available. Thanks to a global Internet regulatory body, we now have a better solution. The newly published 451 HTTP status code will warn you when a page isn't available because of censorship or any other legal obstacles.

Last week, IESG (Internet Engineering Steering Group) approved the publication of "an HTTP status code to report legal obstacles." It will soon be made available for RFC (Request for Comments), but in the meanwhile, Web publishers and administrators can start to implement it on their websites.

Several anti-censorship advocates have demanded 451 error or similar HTTP status code for a long time. In 2013, Web openness advocates proposed the introduction of HTTP 451 to specify when pages weren't available because of legal reasons such as a webpage censored by the government, or if the page was deemed dangerous to national security, copyright, or privacy.

The moniker 451 is a reference to 1953's dystopian novel Fahrenheit 451. In the novel, the writer envisioned a place where books were forbidden. On December 18, the status code was approved by the IESG.

"This status code indicates that the server is denying access to the resource as a consequence of a legal demand. The server in question might not be an origin server," the description of the status code reads.

"This type of legal demand typically most directly affects the operations of ISPs and search engines.Responses using this status code SHOULD include an explanation, in the response body, of the details of the legal demand: the party making it, the applicable legislation or regulation, and what classes of person and resource it applies to."

It will be interesting to see how the 451 error HTTP status code is implemented worldwide. We've previously seen cases where a website wasn't legally allowed to disclose why it removed a webpage.

Mobile Browsing to Trump Desktop by End of 2016: Adobe
Apple Displaces Canon as Top Camera Brand on Flickr in 2015