The hackathon attracted nearly 10,000 participants across the country. 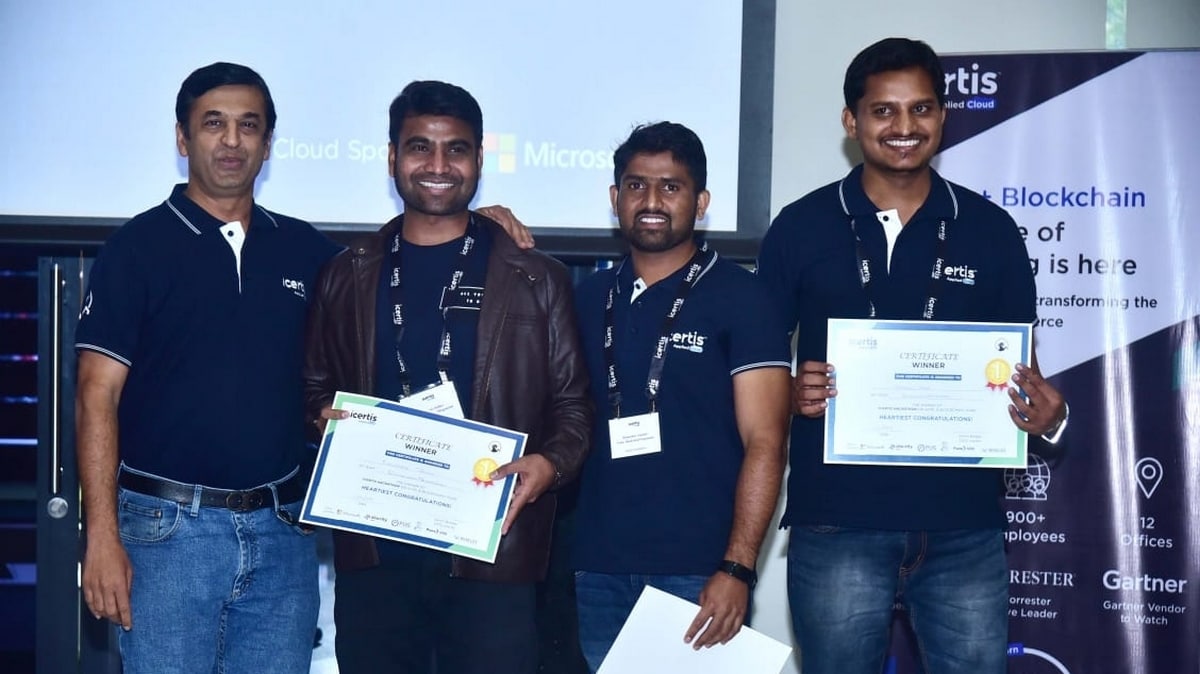 "We hail from farming families from remote parts of India," said Dattatray Jadhav from the winning team

In a shining example of how Indian youth from smaller cities can now create unique Artificial Intelligence (AI) and blockchain-based applications to solve real-life problems, members of a team -- all hailing from farming backgrounds -- have won India's largest AI and blockchain hackathon, grabbing an all-paid trip to Seattle along with Rs. 5 lakh grand prize. Organised by Icertis, a leading provider of enterprise contract management in the cloud, announced the winners of its AI/ML and Blockchain Hackathon held in Pune over the last weekend.

The team then harnessed blockchain-enabled smart contracts for instant and automated claim settlements to those adversely affected by crop failures and natural disasters, the company said in a statement on Tuesday.

"We all hail from farming families from remote parts of India. We are delighted that we could combine our understanding of farming and agrarian challenges with our software expertise, to build a solution using the latest AI and Blockchain technology," said Dattatray Jadhav from the winning team.

"We learned a lot from the Hackathon, and are thankful to Icertis for not just the opportunity but also for getting their finest developers and architects to guide and mentor us throughout," added teammate Bhausaheb Galande.

The hackathon, which kicked off online in October, attracted nearly 10,000 participants across the country, of which 1,306 passed through to the final submission phase.

Finally, 12 elite teams competed on-site at the Icertis office in Pune for a non-stop 24-hour hack.

The hackathon challenge required the teams to build a Web and mobile interface, develop and train their AI/ML algorithms and utilise appropriate cloud services including the Microsoft Azure Blockchain as a Service.

"We were amazed by the range and depth of submissions and the sheer quality of talent on display. It also underscores the talent across the nation and strengthens our resolve to nurture original thinkers and support the communities that are so vital for innovation to thrive," said Monish Darda, CTO and Co-Founder, Icertis.

Saraniyaa Shrii N from team Boopalan from Coimbatore that won Rs 3 lakh as first runners-up said: "We are proud that we could bring together multiple technologies including web, AI, Blockchain and IoT, to tackle a very serious real-world problem".

"Recognition and guidance from a software leader like Icertis goes a long way in helping youngsters like us think big and explore how we could use technology to tackle some of the greatest challenges faced by our generation," said Laisha Wadhwa from Team Heuristic from Delhi. At third place, Team Heuristic won Rs 2 lakh.

Twitter Pulls the Plug on Animated PNG Files Amid Safety Concerns: All You Need to Know