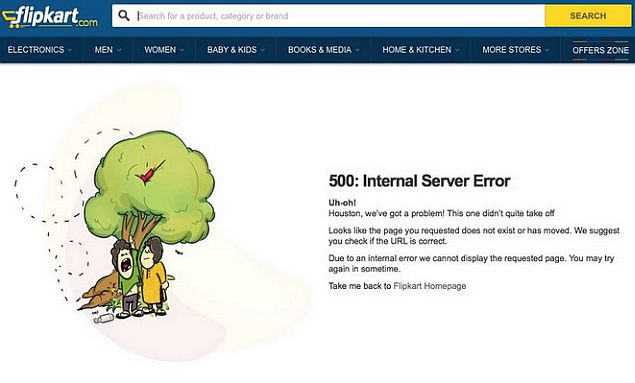 Monday is supposed to be Flipkart's big day with its Big Billion Day Sale - an online sale that has been advertised ad nauseum on TV, in print and online. Unfortunately, in what is becoming an all too familiar story, the sale seems to be riddled with problems.

Before the sale even began, controversy gathered as people noticed that the prices of some of the products were being raised back to the MRP instead of the actual selling price - to better pad the size of the deal on offer.

Worse still is that now that the deals have started, Flipkart is struggling to keep up with the demand. Products are sold out in a matter of seconds, which shows just how limited the sales really are. But perhaps the bigger issue is the number of technical problems users are facing, much like the screenshot we took (shown above).

"There was an internal server issue due to which we had problem in receiving orders online for some time due to surge in traffic," a Flipkart spokesperson told IANS. "We have rectified the glitch and increased the capacity. The site is up and accessible."

Flipkart rival Snapdeal ran a Diwali Bumper Sale of its own, seemingly without much of the negativity that surrounded the Flipkart Big Billion Day, at least in terms of mass visibility on social media. Snapdeal announced later on Monday that it had clocked sales of Rs. 1 crore per minute through the day, an impressive feat by any standards.

Flipkart has grown steadily in India and recently raised $1 billion in funding. It's been a steady march forward starting by selling books and then slowly adding more categories, before transitioning into a digital marketplace for a number of reasons. In many ways, this has mirrored Amazon's trajectory, but in the last couple of months, we've seen signs that the company is struggling to keep up with itself.

When the Xiaomi Mi 3 launched in India, the company launched using a flash sale model. This is the model that it uses in other parts of the world, to great success. When Xiaomi chose to use this model in India however, it partnered with Flipkart, and many people can attest to the frustration involved in trying to buy one of those phones.

If you look at Twitter today, you'll see a very similar pattern emerging.

'OUT OF STOCK' Offer @Flipkart's #BigBillionDay

Of course, not everyone was upset. Those who managed to catch an awesome deal, had no complaints against Flipkart.

Don't know what you kids are going on about. I bought a bunch of comics from @flipkart at 43% off, and consider it a most productive morn.