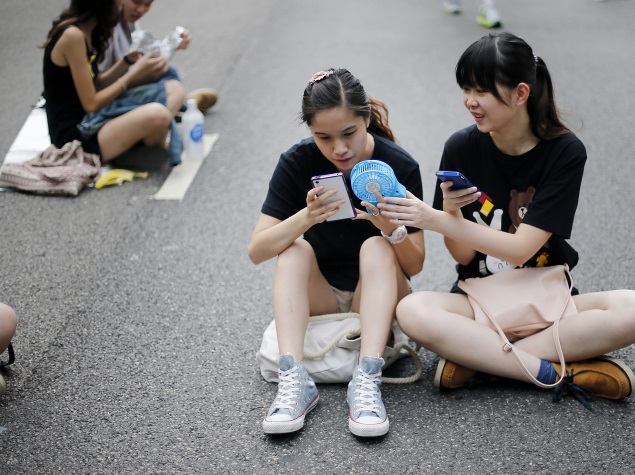 South Korea's president is cracking down on rumours in cyberspace in a campaign that threatens the popularity of Kakao Talk, the leading social media service in a country with ambitions to become a global technology leader.

Prosecutors announced the crackdown two weeks ago after President Park Geun-hye complained about insults directed at her and said false rumours "divided the society."

That rattled users of Kakao Talk, a smartphone-based messaging app used by 35 million of South Korea's 50 million people. It prompted a surge of interest in a previously little-known German competitor, Telegram.

Rankey.com, a research firm, said an estimated 610,000 South Korean smartphone users visited Telegram on Wednesday, a 40-fold increase over Sept. 14, before the crackdown was announced. The company said its estimate was based on a randomly selected group of 60,000 people it follows regularly.

"It will definitely limit the number of new signups, as users opt for services which are not subject to monitoring," said Jon Bradford, a managing director at startup accelerator TechStars in London. "Any policies that the Korean authorities only impose upon local businesses will damage their competitiveness both at home and abroad."

South Korea is one of the most wired societies, with 85 percent of its people online and 40 million smartphones. The government has promised to step up financial support for tech startups.

Kakao Talk's dilemma echoes criticism of U.S. technology companies following disclosures of widespread government surveillance. Internet and other companies have struggled to reassure users while saying they are legally obligated to cooperate with authorities.

This week, China's telephone regulator said it approved Apple's new iPhone 6 for use on Chinese networks after the company promised never to allow other governments secret "backdoor" access to users' data. In Germany, the consumer privacy regulator of the major city of Hamburg told Google it must obtain Germans' permission before using information about them to create profiles for email and other services.

Park's government has been sensitive about the Web and social media after it came under criticism following a ferry sinking in April that killed 300 people, most of them high school students.

Yong Hye-in, a 24-year-old college student, complained her friends were targeted for unjustified data collection after she was detained during a protest in May demanding government action over the ferry disaster. She received a notice that her house and her Kakao Talk account had been searched with a court's approval.

Yong was alarmed to find investigators obtained personal information of people she contacted. That included messages, photos and videos and network addresses.

"It was an indiscriminate collection of data of people around me," she said. "They should weigh how much (my friends) were involved in the case."

Jung Jinu, an opposition politician, complained investigators who looked into his role in a protest over the ferry tragedy collected messages and phone numbers from his 3,000 contacts on the service. He said many used Kakao Talk to discuss social, labour and political issues.

"It is no different from eavesdropping," Jung said.

Kakao Talk, owned by Daum Kakao, an Internet portal and app developer, denied it gave authorities data of Jung's friends. But the court warrant that Jung showed said all messages he sent and received between May 1 and June 10 were subject to search.

Park ordered the justice ministry last month to investigate unfounded stories in cyberspace. At a Cabinet meeting on Sept. 16, she complained about insults about her and said online rumours have "gone too far and divided the society," according to the presidential office's website.

Two days later, prosecutors announced the launch of a team to monitor online information. They said anyone who posts or passes on information deemed false will face punishment. They said that for "grave matters," investigations will begin without waiting for complaints and offending information will be deleted.

"We are aware of such concerns," the co-CEO of Daum Kakao, Lee Sirgoo, told reporters on Wednesday.

Lee said the company had "top security technology" to prevent leaks and only stored messages for a short time.

However, he said, Kakao Talk is "subject to South Korean law" and "when there is a fair execution of law, we cooperate with prosecutors" by handing over information.

So far, the potential for users to migrate to Telegram, which has fewer features such as emoticons, or other messaging providers is unclear.

Rankey.com's survey showed about 90 percent of users of devices that run Google's Android, the most popular operating system in South Korea, visited Kakao Talk every day. Only 2 percent launched the Telegram app at least once on Wednesday.

Some people say Kakao Talk could protect users by encrypting their data. But the company said it saves messages for up to five days in unencrypted form to allow users to copy them onto multiple devices.

Yong, the college student, said she has joined Telegram. She also tries to meet people in person instead of using messengers. But she said too many people still use Kakao Talk, so she cannot stop using it completely.