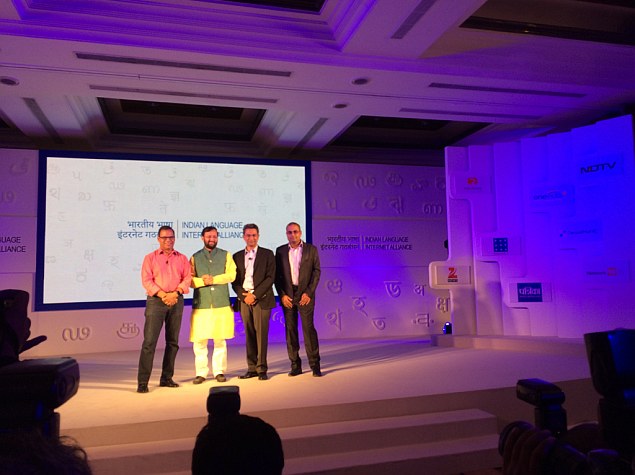 At the launch, Google India MD Rajan Anandan quoted Indian Readership Survey (IRS) figures, saying, "We have 198 million (19.8 crore) Indian English speakers. Almost all of them are online." He added that there are 400 million Hindi speakers in India who don't have access to much Hindi content on the Web. He announced Google's goal - to get 500 million Indians online by 2017.

Google said there were four hurdles to the growth of Indian language content on the Internet. These are: access, discoverability, content and innovation. Anandan said Indians have very limited access to Indian language content. Even when the content is there, the lack of Unicode compliance makes it hard to discover. Part of Google's solution is to encourage more people to post more content in Hindi and display it prominently through hindiweb.com. Anandan also said that there aren't many startups in India and not much innovation is taking place in terms of apps in Indian languages.

Minister of State Information & Broadcasting Prakash Javadekar, while launching hindiweb.com, said he believes that Google's goal of bringing 50 crore people online is attainable. "I believe 50 crore people will come online because Indians are the best at adaptation," he said. Javadekar said farmers in India have always been able to adapt to modern farming techniques, using the analogy to highlight his belief in the Indian Language Internet Alliance's goal.

Google Search, including Knowledge Graph cards, has been available in Hindi for some time. During the launch, Google demonstrated Hindi voice search on an Android phone. The company said it is trying to create standard fonts for Hindi to make more content discoverable. Google said it has 15 different Hindi fonts available at google.com/fonts and plans to add up to 50 Hindi fonts by the end of the year. Google said all of these fonts are open source.

Another of Google's demonstrations - an advanced Hindi keyboard (Google Hindi Input on Google Play) - has been available on Android One smartphones. The company said it "hopes this would be included in the upcoming Android Lollipop OS".

At the moment, Google appears to be focusing on Hindi, but the company said it will use this to build inputs and search in other Indian languages such as Marathi, Tamil and Gujarati. The company declined to give a timeline for launching similar initiatives for other languages.

Gmail 5.0 for Android With Exchange Support Leaked Ahead of Launch
Apple Watch to Reportedly Hit Shelves in Spring 2015