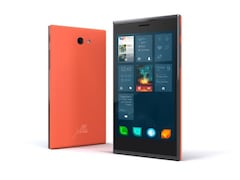 Nokia's rise and fall has been well documented by now, with the story punctuated by multiple missed opportunities and poor decisions. The unfortunate company, once a dominant force in the technology world and now owned by Microsoft, never managed to bring out a modern touch-friendly smartphone platform of its own and suffered as competition from Apple and Android manufacturers decimated it.

Jolla, the company risen from the ashes of Nokia's former MeeGo effort, has released its eponymous debut smartphone in India. The device looks unlike anything we've seen before, with a sandwich-like design and two distinct halves. It has fairly unexciting specifications, but the operating system is all new and has tonnes of innovative touches, such as pulley menus that let you select options with a single finger swipe, and live preview tiles that can be swiped to make their respective apps perform specific actions. The rest of the Jolla smartphone's features are just about okay, with a decent camera and battery life.