Aurora, worth over $500 million, will be the first 1 ExaFLOP supercomputer in the US 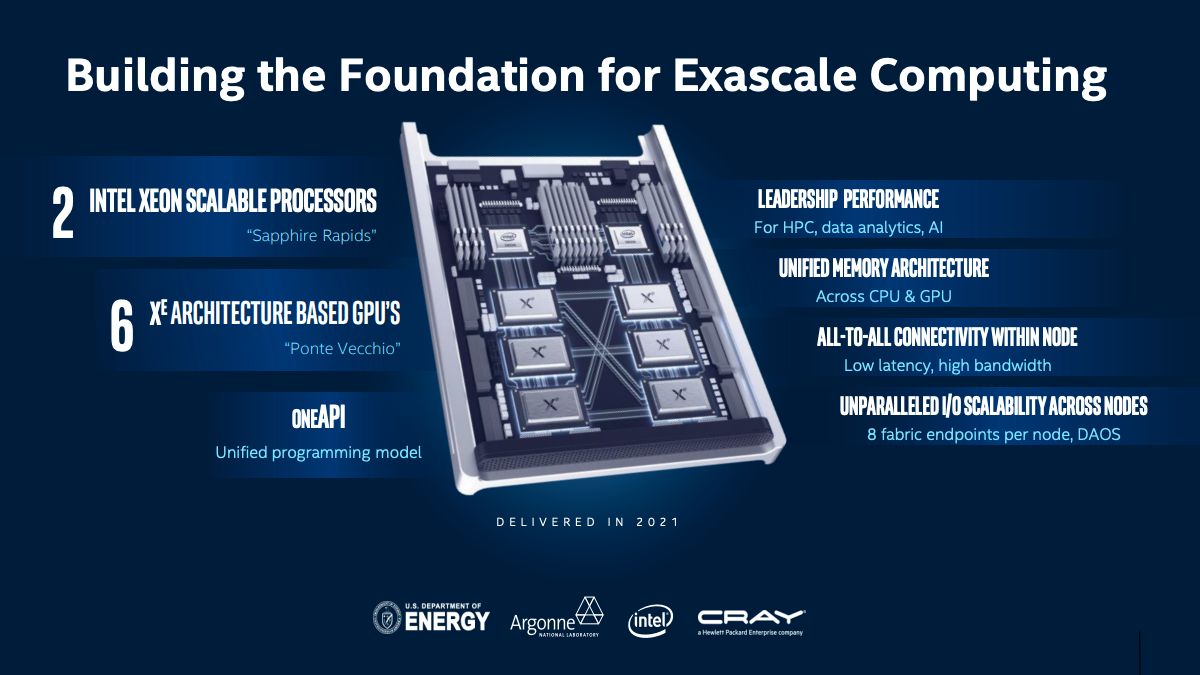 Intel has disclosed an early overview of plans for the upcoming Aurora supercomputer, which it is building in conjunction with Cray for the Argonne National Laboratory, run by the United Sates Department of Energy. It is due to be delivered in 2021. The key components of the Aurora supercomputer will be 'Ponte Vecchio' GPUs based on Intel's Xe graphics architecture, and Xeon Scalable CPUs from the 'Sapphire Rapids' generation. This is the first time that Ponte Vecchio has been disclosed publicly. To tie everything together, Intel will be offering its new OneAPI software toolkit, which is said to allow developers to easily work with multiple CPU, GPU, and accelerator architectures.

Starting with Ponte Vecchio, Intel has been publicising its upcoming integrated and discrete Xe graphics processors for some time now, and is definitely planning to target gamers and PC enthusiasts. However, the bigger picture is that Xe will be an overarching framework that can be customised for different products. Intel has now confirmed that its Xe architecture strategy will address segments right from ultra-mobile graphics to gaming, and workstation graphics, as well as high-performance exascale-level AI and deep learning applications.

Ponte Vecchio will represent the top end of that stack. It will be built using a 7nm process and will be comprised of multiple chiplets. Ponte Vecchio will also use Intel's Foveros die-stacking production process, embedded-die multi-interconnect bridges, and Xe Link for multi-GPU interconnectivity (which is based on the Compute Express Link standard). Intel is touting high-throughput for double-precision floating-point calculations, as well as ultra-high memory and cache bandwidth, though specifics haven't yet been announced.

There will be six Ponte Vecchio GPUs in each node of the Aurora supercomputer, along with two Xeon Scalable processors from the 'Sapphire Rapids' generation which is due to follow the Cooper Lake and Ice Lake generations in 2021. No details of this architecture have been announced. The CPUs and GPUs within each node will be able to benefit from a unified memory architecture. Intel's Optane DC Persistent Memory is also likely to be incorporated. Cray's Slingshot networking architecture will be used to connect hundreds or thousands of Aurora nodes in the supercomputer, addressing memory and storage on the Petabyte scale.

Aurora is set to be used for research into clean fusion energy, cosmological simulations, drug response prediction, and the design of new materials. As the first exascale supercomputer in the US it will be able to process one ExaFLOP, or one quintillion floating-point operations per second. It is being designed for both traditional high-performance computing and AI acceleration. The contract to manufacture Aurora is worth over $500 million.

Separately, Intel has announced a new generation of its Nervana Neural Network Processors for AI training and inference, as well as a new Movidius Vision Processing Unit. Unlike supercomputers, these devices are designed for use as standalone systems at the edge, where individual clients can harness such processing power.