Best Phones of 2019: The Budget Smartphones We Loved This Year

Here are the best phones under Rs. 20,000 that we reviewed this year. 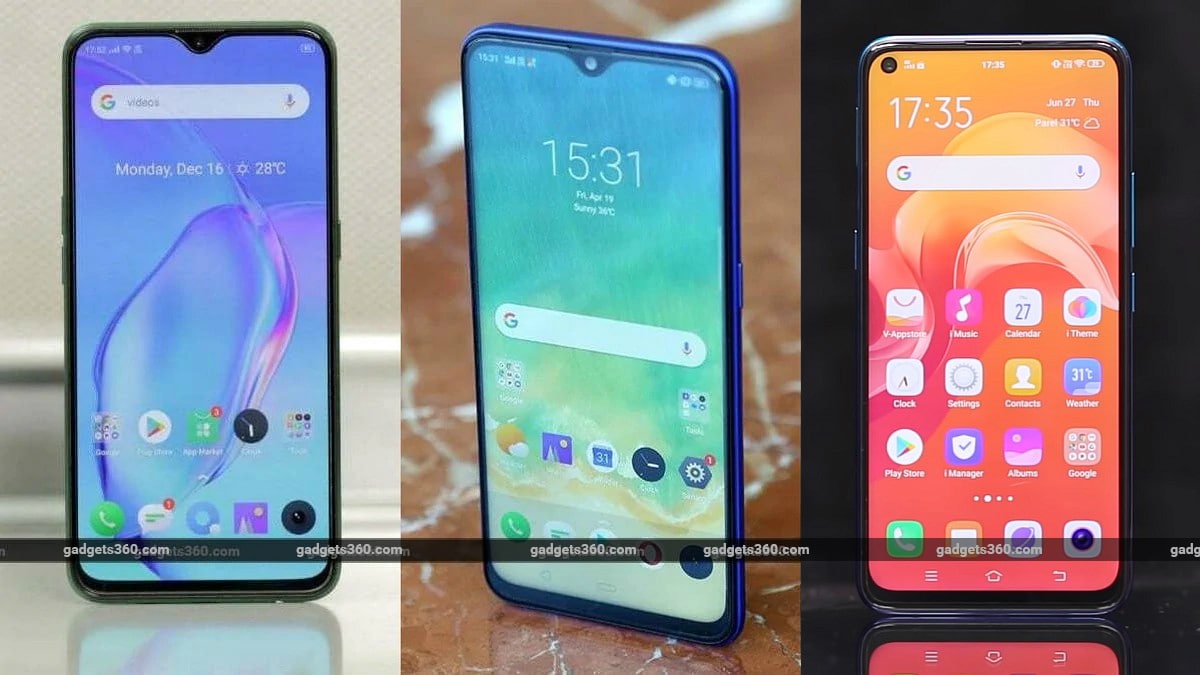 These were some of the best budget phones of 2019

If you thought budget smartphones from last year were impressive, this year we witnessed a whole new breed of budget smartphones that really raised the bar in terms of features and performance one could expect in low-cost smartphones. The demand for multiple cameras in the budget space saw the rise of quad camera phones for as little as Rs. 10,000. Flagship features such as pop-up cameras and in-display fingerprint sensors also made their way to the budget space and hole-punch displays became a lot more commonplace. But, were all of them worth buying? Here's our list of the Best Budget Smartphones 2019.

In this year's list, we've kept our budget picks to phones that we reviewed and were priced under Rs. 20,000. The other criterion was that it had to have an overall rating of ‘8' and above, in order to qualify. We've only picked phones that launched in this price segment and not those that have dropped in price over the months. Last year, it was the sub-Rs. 15,000 segment which saw the most action but this year, manufacturers targeted the Rs. 15,000 to Rs. 20,000 space, where we had the most interesting smartphones.

Here's a list of some of the best budget smartphones we've come across in 2019, in no particular order:

Realme had some excellent offerings this year but by far, the Realme X2 and XT were among the best. The Realme XT was the first phone to launch in India with a 64-megapixel camera, which offered a premium design and good build quality, a good set of cameras and strong overall performance thanks to the Snapdragon 712 SoC. The XT also has very good battery life and fast charging, which made a good workhorse. The camera app wasn't the most feature-rich, which was our only real major gripe with it.

Realme fixed this in a way with the Realme X2. This was the company's last launch of 2019, which offered most of the features of the XT, but with some nice upgrades like faster charging, a higher resolution front camera and a much more powerful SoC. The X2 is geared towards gaming, thanks to the Snapdragon 730G SoC, which again, is the first phone in this price segment to sport this chipset.

The Realme 3 Pro was a good iterative update over the Realme 2 Pro and for the price, we got a bigger battery, slightly better cameras, new colours and a more efficient SoC, over the previous model. We found the battery life to be very good, we got a bundled fast charger, and cameras fared well under good light. Low-light camera performance was still a bit weak and we were a little disappointed to see a Micro-USB port. Also, we found the laminated back picked up scuff marks quite easily.

The reason we've clubbed the Realme X and the Oppo K3 together is because they are essentially the same phone, just with a different cosmetic design and brand name. The Realme X was the first phone to launch under Rs. 20,000, which had a pop-up selfie camera and an in-display fingerprint sensor. Apart from the slightly large size and the fact that it didn't have expandable storage, it offered a unique design and was built well; had a bright and vivid OLED display; strong overall performance and had good cameras.

The Oppo K3 was essentially the same phone but with a slightly different camera setup. Nevertheless, it also offered good camera performance, with fast autofocus speeds, a bright and punchy OLED display, and a premium design. The lack of expandable storage was a bit of an issue, especially since the base variant had just 64GB of storage. We also found ‘Portrait' mode in the camera app didn't always deliver satisfactory results. However, it was still a good phone overall and was priced pretty much identically to the Realme X.

Samsung really stepped up its game this year with its new Galaxy ‘A' and Galaxy ‘M' series offerings and among that, the Galaxy A50 was one of the better ones. Priced on the border of Rs. 20,000, it packed in all the current-day features one would expect from a budget phone, including good looks, a vivid display, a useful set of cameras, impressive battery life and an in-display fingerprint sensor. We didn't find the low-light camera performance to be great and OneUI troubled us a bit with unwanted notifications but other than these minor issues, it is still makes for a good package.

The Redmi Note 7S was a very interesting phone, which was designed to offer a 48-megapixel camera phone at under Rs. 10,000. And it succeeded in doing so as it essentially had the same DNA as the more expensive Redmi Note 7 Pro, but at a lower price. It offered a premium design, decent battery life, good cameras and smooth performance. The few gripes we had with it included MIUI's annoying spammy notifications, it didn't have a dedicated microSD card slot and even though it supported fas charging, the fast charger wasn't bundled. Still, for its sale price, it offered very good features.

The Samsung Galaxy M40 offered a unique set of features such as a vibrating screen for voice calls, a hole-punch display and Type-C headphones in the box. We also liked the fact that it was light and easy to carry, had a decent set of cameras, up-to-date software and good app and gaming performance. It did have minor issues like it would heat up easily when gaming, slow autofocus and the lack of a headphone socket was a little disappointing. Overall, it still offered a good set of features for the price.

The Realme 5 was the first phone to offer four cameras under Rs. 10,000 and also one of the first to have the Snapdragon 665 SoC too. It offered a large display, good build and finish, very good battery life and an efficient SoC. It still lacked fast charging, low-light camera performance was a little weak and the phone was a little heavy.

The Realme 5s was introduced as an answer to phones such as the Vivo U10 and the Redmi Note 8. The 5s was essentially the same phone as the 5, but with a 48-megapixel camera and a new colour. It offered a slight improvement in image quality in daylight but still had the same shortcomings as the Realme 5.

The 5 Pro is the top-end model in its series, which offers powerful performance, good camera performance, and fast charging. We also found the image quality to be particularly impressive in daylight. We found the battery life to be a little average and the interface of the camera app needed a bit of improvement. Other than this, it was a solid all-rounder for its price.

The Vivo U20 fixes most of the shortcomings of the U10, by adding a higher resolution display, a more powerful chipset — all for a bit more money. This made it a lot more attractive in terms of features and value, which is why it's made the cut on our list. Things could have been better had Vivo used a Type-C port and trimmed the bloatware in Funtouch OS. Camera performance was a bit lacking too. However, overall for the price, the U20 is a good budget pick.

Xiaomi's Pro range of Note series smartphones have long been disruptors in this segment and this year was no exception. The Redmi Note 7 Pro was the first phone to offer a powerful chipset like the Snapdragon 675 under Rs. 15,000 and for a long time, has been out go-to recommendation for the best phone in its segment. It also offered other premium features which weren't commonplace at the time, such as a glass back and a Type-C port. The Redmi Note 7 Pro also had good cameras, delivered long battery life and offered a premium experience. It did have a few issues such as it heats up quickly and MIUI is still spammy.

Recently, Xiaomi launched the follow up called the Redmi Note 8 Pro, which offered a 64-megapixel camera sensor and a powerful SoC such as the MediaTek Helio G90T. It offers excellent performance, a versatile set of cameras, premium build quality and an HDR display. It was also the first phone with a dual-wake functionality, allowing you to use Google Assistant and Amazon Alexa, together. Some of the shortcomings include that it gets a bit warm under load and low-light video performance was underwhelming.

HMD Global didn't have many standouts this year, but the Nokia 7.2 was one of the better ones. In typical Nokia fashion, the 7.2 features an excellent metal body and slick design and sports stock Android. It also has a good quality display, smooth all-round performance, decent battery life and a good set of cameras. Low-light camera performance was a little lacking and it didn't offer the best value, but if you priorities style over brute power then this is till one of the best looking phones in this budget.

The highlight feature of the Galaxy M30s was its massive battery. At 6,000mAh in capacity, you can be rest assured that it would easily last you an entire day even with the heaviest of usage. We also liked its crisp AMOLED display, decent app and system performance, and good camera performance in daylight. Like the Galaxy M40, the autofocus speeds were a bit slow and OneUI has the tendency to spam you with unnecessary notifications.

Vivo's Z1x and Z1 Pro have a lot of things in common but are targeted at slightly different audiences. The Vivo Z1 Pro launched first, boasting of a hole-punch display, a large battery and triple rear cameras. It was a little bulky and heavy, it lacked a Type-C port and low-light video wasn't great but it still had some redeeming qualities such as good overall performance, very good battery life and good value for money.

The Vivo Z1x ushered in some tangible improvements in the form of an AMOLED display, an in-display fingerprint sensor — all this at a slight bump in price. It also featured very good battery life and fast charging. The phone is still large and bulky and the lack of expandable storage was something we didn't quite like.

Best Headphones and Earphones of 2019