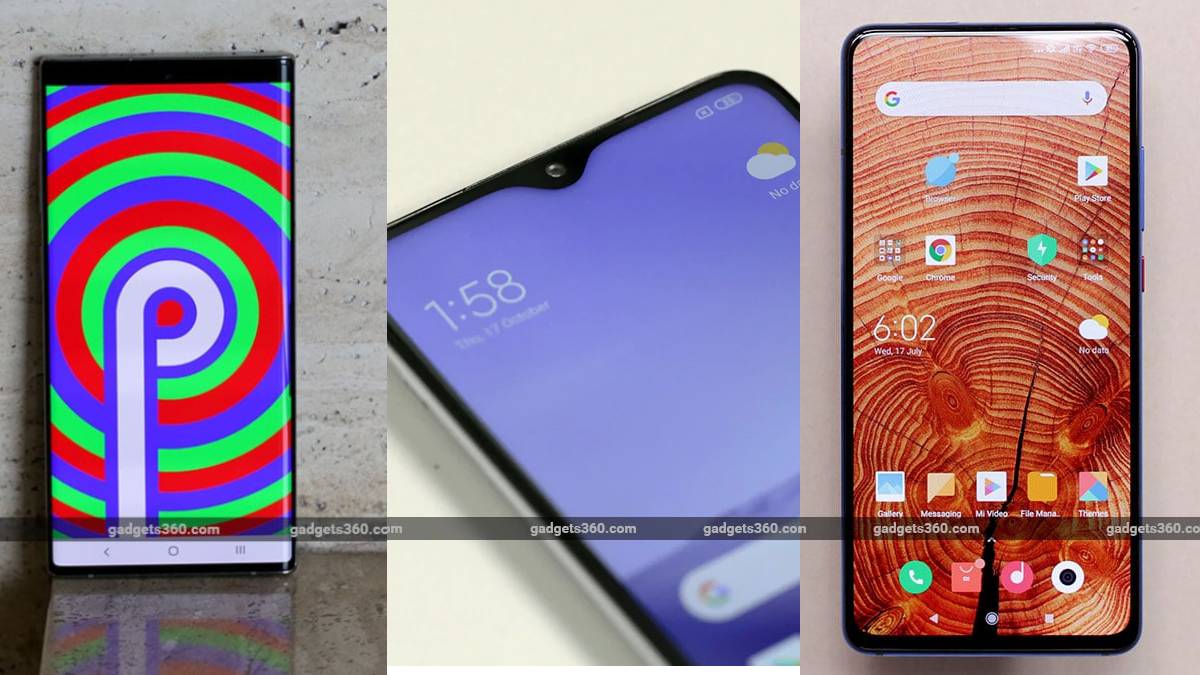 The best smartphones of 2019 include the Redmi K20, OnePlus 7T, and Realme X2 Pro

There are hundreds of smartphones launched each year. Here at Gadgets 360, we manage to put quite a lot of them through our thorough, intensive, and time-consuming review process. We check each of these phones for multiple parameters, we run several formal tests, and we use them like we would use our own devices just to that we can help you understand what it might like to own it. We look at physical construction quality, specifications, features, software, usability, heat, weight, battery life, photo and video quality, gaming performance, screen and speaker quality, multitasking, aesthetics, ergonomics, innovations, and much, much more. It takes a lot to be the best mobile phone, especially in the explosive Indian market.

Not all devices pass through our labs with high marks on their report cards, but there are a few models each year that truly impress us. These might be devices that introduce brand new features, or raise the bar in terms of form and function. They might bring capabilities that were previously restricted to expensive phones to much more affordable levels. They might even just be really fun to use.

Do keep in mind that we score each smartphone at the time of its review based on multiple factors including the state of the market and competitive landscape. The prices of some of these models might have fallen, newer competition might offer better value, and some might have been replaced already.

Here are the best phones that we reviewed all year. These are the ones that scored the highest across multiple criteria in our reviews during the course of 2019, in no particular order. Which one do you think was the best smartphone of the year? Do let us know in the comments section.

We reviewed the Galaxy Note 10+ (Review) at the time of its launch and asked ourselves whether the idea of a high-end phone with a stylus was still relevant, and whether Samsung had made its latest flagship too big. We concluded that while this model isn't for everyone, it definitely offers unique capabilities and delivers all the features anyone could want in a high-end phone. It also looks stunning, takes great photos and video, and has software that makes good use of the S-Pen.

OnePlus has now broken into the premium price bracket and isn't quite the “flagship killer” brand it used to be. The OnePlus 7T Pro (Review) and even the  OnePlus 7T (Review) are more expensive than we would have liked, but we can't deny that they have great features including 90Hz displays, excellent software, and top-end processors. The cameras could use some improvement and wireless charging is long overdue, but these are both still great phones. We do think that the OnePlus 7T offers better value than the 7T Pro, and the differences between them are relatively minor.

The second-gen ROG Phone 2 (Review) is a powerful, feature-rich phone with some of the best specifications we've ever seen, and the entry-level variant is priced fairly reasonably. Standout features include its 120Hz screen refresh rate, aggressive styling, comfortable side-mounted Air Trigger buttons, and wide variety of gaming-specific accessories. More standard phone features such as the cameras and battery life also impressed us. If you want a premium phone primarily for gaming, this could be the one for you.

Realme launched the 3 Pro earlier this year, and it has already been superseded by the Realme 5 Pro (Review), as well as to some extent the Realme XT. All these models are very strong contenders at their price levels, but the Realme 3 Pro (Review) really stood out at the time we reviewed it for the capabilities it offered for under Rs. 15,000. This phone has spent plenty of time on our lists of recommended models, and it continues to be a decent option which now starts at less than Rs. 10,000.

Apple's new naming strategy for the iPhone 11 series makes this model feel less like a low-cost alternative and more like the mainstream option. The iPhone 11 (Review) replaces the popular iPhone XR (Review) and adds a second wide-angle rear camera, faster A13 bionic processor, and better battery. Sadly the screen is still quite low-res, and you still get a terribly slow charger in the box, but the pricing isn't too bad – for a current-gen iPhone, that is. If you need to upgrade from an older iPhone but can't spend on the Pro models, this is a great option.

Xiaomi decided to take another stab at the premium market after focusing exclusively on budget phones for a while, and the company impressed us with the Redmi K20 Pro (Review). This phone comes in well under Rs. 30,000 but offers loads of top-end features including a Snapdragon 855 processor, notchless screen with a pop-up front camera, and in-display fingerprint sensor. Performance in our tests was great, and the cameras proved to be versatile.

Not only does this phone offer top-end specifications at a reasonable price, it also has one of the only optical zoom cameras in the industry. Sure, that makes it thicker and heavier than most of its competitors, but there's nothing quite like being able to capture extreme amounts of detail from a huge distance. The rest of the Oppo Reno 10X Zoom Edition's (Review) cameras also impressed us, as did its screen and overall performance. The annoying ad-infested software was our biggest problem with this phone.

The non-pro Redmi K20 (Review) disappointed a lot of people who were expecting it to cost less than Rs. 20,000, but Xiaomi designed around specifications, not budget with this model. The launch price was more than fair considering the performance, features, and cameras it has. Highlights include a notchless AMOLED display, excellent battery life, pop-up front camera, and attention-grabbing design. What's more, it now sells for just under Rs. 20,000.

These non-identical twins were two of 2019's earliest flagships and still stand out for their style, features, and performance. They have the same specifications apart from screen size, battery capacity, and the fact that the larger model has a secondary depth camera in the front. The Galaxy S10+ (Review) was technically Samsung's best model, but many might prefer the size and feel of the Galaxy S10 (Review). Both have excellent rear cameras, gorgeous displays, powerful processors, and large batteries. Both are also built incredibly well and offer all the top-end flagship features you could want.

Only recently superseded by the new Realme X2, the Realme X (Review) was launched in July this year to give buyers premium features in the sub-Rs. 20,000 space. Highlights of this phone included its pop-up front camera, notchless OLED display with an embedded fingerprint reader, and modern styling. The hardware reasonably powerful too, including the Qualcomm Snapdragon 710 processor and up to 8GB of RAM with 128GB of storage, but sadly there was no microSD card slot. The virtually identical Oppo K3 (Review), from sister company Oppo, unsurprisingly scored just as well too.

The most affordable of Samsung's Galaxy S10 family, the Galaxy S10e (Review) has also earned itself a fan following for its compactness and practicality. This phone offers nearly all the power and features of its more expensive siblings including the selfie camera embedded in a hole in the screen. You do lose the in-display fingerprint sensor and optical zoom camera, the screen isn't quite as sharp, and you can't get as much RAM or storage. The cameras on this phone are still versatile and deliver great quality, though. We had no complaints with performance or battery life either.

Apple's big, bold, expensive flagship phone for 2019 has a controversial camera module design, and most people would consider it overpriced, but it is the best of the best that Apple has to offer. Performance and battery life for the iPhone 11 Pro Max (Review) are both outstanding and the display is superb despite the now-outdated notch. The three rear cameras deliver brilliant photos, even at night. You won't easily find this phone discounted even months after its launch, but the slightly more affordable iPhone 11 Pro offers identical features and hardware other than screen size and battery capacity.

Realme stepped outside its usual budget segment with the Realme X2 Pro (Review), which offers flagship-class features starting at just under Rs. 30,000. Competing with OnePlus and Xiaomi, the Realme X2 Pro boasts of a Snapdragon 855+ processor, 90Hz AMOLED screen, and support for 50W fast charging. There are four rear cameras and a tiny waterdrop notch for the front one. In effect, this is a more affordable version of the OnePlus 7T. Although not without a few issues, this is a solid high-end smartphone for those on a budget.

Although it didn't score as well on our scale as the phones listed above, there's no denying that the Redmi Note 8 Pro (Review) is a tremendously popular phone and offers excellent value for money. Before it, the  Redmi Note 7 Pro (Review) caused a sensation in India for the same reason. Twice, Xiaomi managed to defy our expectations of what's possible for a phone priced under Rs. 15,000. We'd still like just a little more polish to the software and cameras, but both models are still phenomenal budget phones.

Vivo's march into the online-first low-cost phone space has earned it many new fans, although the new Vivo U10 (Review) and Vivo U20 (Review) also make the company's other offerings look overpriced by comparison. The U20 especially delivered highly competitive specifications and features, and marks a new beginning for the popular company in India – while keeping Xiaomi and Realme on their toes.

Samsung tried taking back the market this year with its low-cost A-series and M-series devices, and we've had positive impressions of most of them. The company finally decided that it needed to take on Xiaomi and others at their own game, and even though its prices haven't been as low, the Samsung brand is enough to convince many people to choose one of these models. The Galaxy M40 (Review) stood out from its siblings at the time of its launch because of its modern design, great battery life, and good performance. The cameras were disappointing and we would have liked a bit more finesse, but Samsung is definitely still in the game.